Newby at Marfa at Lett 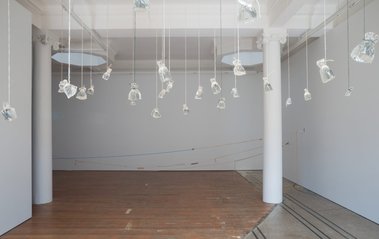 The two exhibitions currently running at Michael Lett’s, by Kate Newby and the late Julian Dashper, both reference these artists’ residencies at Marfa, the west Texan town made legendary by the activities of resident sculptor/painter/installation artist/critic Donald Judd (1928-1994). Newby’s stay was in January 2018, (her Lett show is on the ground floor and ascending staircase), Dashper’s was in 2001 (his Lett show is down in the basement), and both on occasion reference Judd’s friend, the light artist Dan Flavin (1933-1996) who has six barracks of work in the Chinati complex that Judd set up in 1979.

Flavin’s work with fluorescent tubes provides a minor reference for Newby, his name being part of the title (along with Roni Horn’s) of a framed etching in the landing by a staircase. Two other etchings are nearby and a number of ceramic, brass, copper, glass, bronze and porcelain sculptures are suspended by wire from the banister. Some allude to shellfish.

In my view the most exciting work is Swift little verbs pushing the big nouns around on the ground floor, which is in two parts, one being arrangements of small objects laid out in the window ledges on the street front, the other being on the bay on the opposite side of the room where three extended parallel lines of suspended rope, wire and threaded-on ceramics horizontally cross the gallery floor. Much of the material used here Newby found on the ground as detritus when wondering around Marfa, obsessively picking it up like, say, Kurt Schwitters, and sorting it into a kind of archive.

What is surprising about this installation is that there are no large planes of intensely saturated colour applied to walls, floor, ceiling or draped curtains, like Newby has done in the past. The emphasis instead is on shape, line and light, and reflection or transparent colour, on rope, wire, cord, leather, chain, ceramic shell-like forms, cast brass knobs, nails and glass. They are sculptures used as drawing in space, and both parts amusingly reference museum installations: the arrangements in vitrines, and crowd control barriers.

In between the window wall and the three long, suspended, tied-together, lengths of rope, wire and leather is another work suspended from the ceiling, transparent glass forms that look as if cast in soft bags, hanging from 36 lines of jute. It is a collaboration with Jake Zollie Harper (a San Antonio glassblower), and a beautiful central foil for the activity on the walls and spaces on either side. It glows, reflects and refracts like a collection of little glass sacks hovering just above your head.

I think this is the best show I’ve ever seen from Newby, and I’ve seen quite a few. The Swift little verbs pushing the big nouns around work I find especially wonderful visually with its careful attention to intimate detail (the coiling of the rope around itself, or lined up collections of bent tacks, for example) and contrasting spatial vectors—and it takes advantage of Lett’s gloriously unusual space. I also wonder if the beautiful title is a witty allusion to Richard Serra’s process sculptures and Bruce Nauman’s videos; maybe Smithson’s texts too. The intransitive versus transitive verb distinction. Poor bullied nouns indeed. 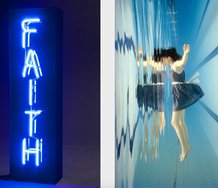