One Mind: A Multitude of Bodies 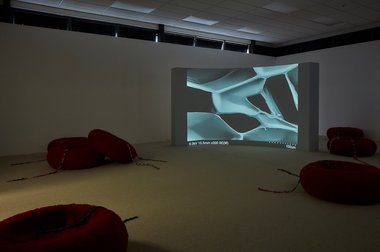 As you can guess from the show's title, Songsataya is interested in group decision-making, but mixed in with non-human sensibilities. Humans in his scenario share the planet with other— just as (if not more) important—creatures which he presents as having community minds or ‘collective kinship'. And even multiple cellular parts of the human body in his vision have community minds also—like red corpuscles.

A complex show with many discrete parts, this Sorawit Songsataya installation is (to oversimplify) a meditation on collectivity-taking its title from the murmuration of birds. It is a very different sort of project than the far more intimate Bronies installation that Songsataya presented in Te Tuhi in June 2016. It is sprawling, holistic, and in its own way, didactic, and not so successful spatially as his earlier freestanding sculpture, but instead is attempting something quite different.

In the large square Artspace gallery, now carpeted so it can be lain on, Songsataya presents a video, Lovebirds, a film with several interwoven sections. It is projected onto a large curved screen (with an awkward dead space behind it) surrounded by red doughnut forms that represent red corpuscles. They are made of hard polystyrene covered with woollen fabric. Though they look invitingly like seats, they are hard and uncomfortable, being sculpture not furniture. Each has a little woollen band attached, a DNA sequence.

As you can guess from the show’s title, Songsataya is interested in group decision-making, but mixed in with non-human sensibilities. Humans in his scenario share the planet with other—just as (if not more) important—creatures which he presents as having community minds or ‘collective kinship’. And even multiple cellular parts of the human body in his vision also have communal minds—like red corpuscles.

Just inside the door to the gallery office is a monitor showing videos of seminars held by various intellectuals Songsataya admires, like Donna Haraway, Jane Bennett and Rosi Braidotti, basically his workingnotes that conceptually underpin the show. There are also programmes on various microscopic social creatures Songsataya is fascinated by, like plankton, amoebae and zooids, which live in colonies. In the backroom on the other side of the installation is a group project referencing these ideas and the content of his Lovebirds video, using felting methods where the drawing of marine images is achieved with strands of wool and sponge foam.

There is also a writing project from Robyn Maree Pickens, where an assortment of interconnected discursive texts appear during the show via a range of media such as gallery and street posters, hardcopy art magazines, and Instagram. One mind: several bodies, you could say—and cleverly called ‘non-hyphenated.’

With the Lovebirds film there are about six split-up threads of narrative intermingled in a carefully organised sequence. Each film type has its own visual style and content. There is a laboratory where technicians do centrifugal experiments with corpuscles;  a brushed on calligraphic sequence involving a Māori fable about whale and a kauri tree, where they swap skins; there are hypnotic views of the exposed backs of three large seated women swaying in unison to gentle music; some shots of plankton and swirling butterflies; an image of various DNA structures; and most memorable, some gorgeous aerial views of blue waves crashing on the sandy beach making intricate white patterns amongst the swirling eddies-alluding to very early forms of waterbased life.

This visually poetic, moving image project is infused with lots of serious science and philosophy, leaving it up to the visitor to explore what they please. (Many of the references Songsataya provides are linked to in this article.) While the show is open ended—being mostly about extractable information—it is also sensually beguiling with its use of colour, form, sound and movement. While I prefer some of his earlier (more baffling) moving image installations as forms of sculpture, this complex exhibition gives a lot to those willing to make repeat visits.