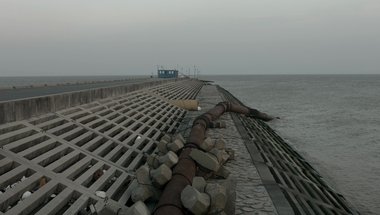 The Field Recordings group (two Pākehā, one Māori, two Chinese; four men, one woman) in these projects have focussed their attention on the waterways and adjacent industries in the Shanghai region, in particular the people that work within them. The voiceovers and recorded conversations are important, but so too are the cinematography and musical aural backgrounds which are often elegant, emotionally stirring (by way of beauty) or shocking.

Field Recordings is a collective initiated by a couple of Auckland university lecturers who in the process of working to form educational partnerships in China, formed friendships (via artists and interpreters) with locals and decided to form a collaborative unit. Of course collaboration is now the current zeitgeist, but it is obvious video documentaries such as those in this show would be hard to make any other way.

As for China—well, in terms of daily news events—how could one not be interested? The Chinese have a salient and vital presence in a city like Auckland, and in terms of global trade (which this show constantly examines—via the tension between ‘local’ and ‘global’) it is fascinating that China is the third largest supplier of our imports (that being a mere 0.4% of their exports), and the second largest market for our exports.

The Field Recordings group (two Pākehā, one Māori, two Chinese; four men, one woman) in these projects have focussed their attention on the waterways and adjacent industries in the Shanghai region, in particular the people that work within them. The voiceovers and recorded conversations are important, but so too are the cinematography and musical aural backgrounds which are often elegant, emotionally stirring (by way of beauty) or shocking.

These last two aspects showcase the formidable abilities of Clinton Watkins, qualities consistent with the shows he has had in the past at Starkwhite and Two Rooms. Locations uses an assortment of video material not used in the Field Recording works, but here arranged for a single monitor-accompanied by seductively droning Enoesque music—while Invisible Narratives is an aural (non-visual) equivalent for several speakers, located in the foyer between the two ST PAUL St galleries. The former for me—with its use of subtly controlled movement of camera or subject—was the peak of the show, while the latter didn’t seem be working when twice I (aurally) explored the foyer. The ambient sounds I heard seemed to be unrecorded ambient sounds: Auckland noises, not Chinese.

Jim Speers’ Baoshan District features nocturnal imagery that often alludes in its subjectmatter to traditional scroll painting, such bamboo leaves or reflections of the moon in water, with a soundtrack of night-time crickets. The camera follows a creek as it meanders around the apartments, industrial area and commercial centres, while still remaining cognisant of a westerner’s perception of Chinese art history.

Guo Zixuan‘s The Nine Days feature a voiceover from her elderly grandmother who discusses the 9 sets of 9 days that come after the winter solstice. She comments at length about the bird, mammal and plant life on the banks of the Chao Bai River near Beijing (where she lived), noting the arrival and departure of the geese who are shot at because they raid the wheat fields, the wandering shepherds with their sheep, the cutting and selling of river ice to raise money, and the raking up and collecting of leaves from allocated sections of forest for household fuel. The lovely brown and grey, austere, rural riverscape imagery makes this work distinctly memorable.

Li Xiaofei‘s Argentum showcases the appallingly dangerous working conditions of employment within a rural silver foundry. The hot metal and noxious fumes are obviously lethal liabilities and disturbing to see, while the workers comment on the poorly regulated industry and their lack of protection. The pollution depicted here fits in well with the other videos of stagnant rivers and contaminated air that again are disturbingly beautiful with their (paralysing?) stillness and silvery-grey tones.

Field Recordings’ Xiao Pudong is filmed in the industrialised Pudong area on the east bank of the Huangpu River. It features Zhu Weihua, a crane operator who from his hot unventilated cab loads sand into barges. He cockily muses over his lack of money, dissatisfaction with his job, and alternative income possibilities such as breeding snakes so that their venom can be sold as anticancer medicine. He also frets that his wife doesn’t get on with his mother, and speculates that if he demolishes his house he can sell the land, and with the profit (hopefully) buy several properties and become prosperous. Zhu is a talkative, quite amusing and open, personality.

The other contribution from Field Recordings, the comparatively sprawling Let the Water Flow, has four channels butted together as projections on a long centrally positioned dividing wall. The different lengths of video come and go for you to interconnect, while beanbag seating is provided along the opposite wall.

This work looks at the Shanghai inhabitants (the ‘Water People’) embedded in the flow of commerce as containerloads of goods ribbon their way around the oceans of the planet. It has some similarities with Allan Sekula and Noel Burch’s wonderfully informative and elegant film, The Forgotten Space (2010) that was a highlight of Hou Hanru’s Auckland Triennial—but is much harder to focus on with four changing projected rectangles.

Those four rectangles seem to be based on four watery routes and those sailing on them. One is along the Suzhou Creek as it flows into the Huangpu River which then flows into the Yangtze Delta. Another is the trip a barge makes from the port on Hengsha Island in the Changjiang River as it heads out to the East China Sea. Another still is a trip from the Yangpu Pier on the Huangpu River, also eventually heading out to sea.

In this multi-channelled work Watkins has talked about ‘smoothing out’ the sound between channels, of deintensifying it. I think he has overdone it. I found the sound (usually of people talking) monotonous and even soporific. It subtracted any power the moving images might have had presented simultaneously.

The Field Recordings publication, designed by Narrow Gauge, is a handy, well illustrated, cheaply procurable booklet, with excellent writing (translated into Chinese) from Michael Wilson, K. Emma Ng, Hsieh Feng-Rong, and Abby Cunnane / Balamohan Shingale (they do the foreword). The texts interlock well in their different focii—each essay being quite distinctly individual and interesting—and go nicely with the unauthored gallery English / Māori / Chinese handout (written by Abby Cunnane I suspect). My only gripe is that the font size of the text in the last five (bar one) pages is so small (and optically clashing with bright red letters / pictographs on grey) that it is almost unreadable.

The single monitor works in particular make this show worth at least a couple of visits.