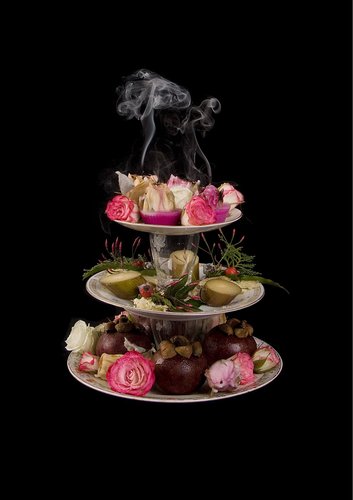 The employment of text is a tradition that reaches back to artists like Barbara Kruger and the Guerrilla Girls, early feminists, who, like McCahon, but for completely different reasons, needed words. And the message is still the same. “We've had it with you”.

That little girls as young as 5 years old in New Zealand are worrying about their body image, (Does my bum look big in this?), demonstrates that feminism still has work to do. Ellie Lee-Duncan and Nicole Fairey, curators of the latest show at the newly established art gallery, Tacit in Hamilton, entitled, Renegotiating the Feminine Ideal, might say this would be a good place to start. The exhibition involves 9 women artists, all who would give short shift to any preoccupation with male constructed ideals for women.

Briana Woolliams would certainly have no truck with such asinine matters as her banners (screen print on cotton) come complete with text. They announce in polemical terms the state of play for strong contemporary women, negotiating twenty-first century gender politics. One of them reads: “These insinuations will not break this backbone my mother carved“.

It’s a quotation from a poem Woolliams has written. The publication of her collection (on show in the gallery and made from watercolour and rice paper), is ironically entitled, Soft, but there is nothing limp or soft about the contents of this slim volume.

The banner statement comes from a much longer text which in part reads:

Bare hands, raw skin, tireless fists
taught me my backbone
not weak as some men may think.

The employment of text is a tradition that reaches back to artists like Barbara Kruger and the Guerrilla Girls, early feminists, who, like McCahon, but for completely different reasons, needed words. And the message is still the same. “We’ve had it with you”.

Less strident but no less subversive is the work of a small women’s collective who number just two members, Ashlee and Sam, two young mothers in their early twenties, calling themselves Bridge City Stitches. They have reversed the traditional rejection of gender art forms and set about reclaiming feminine craft in the cause of art practice, in this case, embroidery. Using a long stitch on stretched silk, they have chosen to depict gloriously ‘wicked’ subjects, all the more mischievous because of the medium used, subjects that might startle members of the embroiders guild.

In tondo format, two slender disembodied female nail-polished hands form in sign language the old fashioned gesture that signals copulation. Entitled Trust Issues, the work becomes both comic and serious, whimsical yet poignant, tender but raw, the fusion of opposites that in fact is embodied in the mimed symbol, literally, and thus conceptually.

A second work depicts again a disembodied woman’s hand exploring her own genitalia. Eroticism and playfulness play off here deliciously and frankly. The oblique angle and ‘shocking’ nature of the thing, simply because of the medium employed, is a thing to behold. The title Slow Hands says it all. A touch of Pop Art aesthetic chimes well with the kick-arse mood of the works.

Along similar lines, Caroline Burton has used felted wool to create her wall relief sculptures. Femme, with its triangulated and overlapping forms suggests a vulva configuration, while It’s a Girl, crowds into a concentric formation what appears related to cell growth in a zygote. Again ‘women’s craft practices have been given their due, and the conventional art hierarchies challenged in order to proclaim a new ideal, one that no longer anticipates the crowning announcement: “it’s a boy”.

Two artists in the show provide a curious spiritual flavour to the exhibition. Women traditionally and stereotypically have been regarded as religious caretakers, carriers of all things prayerful and devotional. Camela Nepomuceno buys into that with her Faith, Hope sculpture—white plaster hands which cradle small sculptured bronze roses—ticking all the Roman Catholic boxes: a religion that for most of its life has suppressed women. The motif of hands in the show, involved in diametrically contrasting deeds, is a singular delight.

The second bite of the spiritual cherry is the creation of Niki Hill. Her Blush 1 and 2 (C Type Photograph) takes the concept of high tea to another level. Presented as a kind of memento mori, these lush photographs are in fact still-life’s which for the artist celebrate fleeting moments of spiritual love.

Instead of lamingtons and cucumber sandwiches stacked on the multiple layered cake stands, what we have are objects heavy with symbolic reference that include, roses, candles, sugarcane and cypress leaves. A genteel feminine practice has been transformed into something more telling and significant with a touch of gravitas.

The domestic has also been reconstituted in the work of Zoe Nash whose practice in graphic design is utilized in her abstract formations using acrylic, ink and vinyl on paper that possess both decorative elements as well as high art formulations in order to create an adroit hybrid fabrication.

In similar vein, Selina Shanti Woulfe has reworked the brooch format and turned her small sterling silver and polymer clay constructions (called Vulgaris) into images suggestive of the intimate parts of a woman’s anatomy.

But the work that swings closest to embracing the use of common domestic ware would have to be that of Cam Munroe and her hand painted milk cartons featuring the portraits of real women, relatives of the artist discovered during her own genealogical research. The use of an ordinary milk carton as medium recalls the American practice of featuring missing persons on these sachets.

This exhibition opened a few days after International Women’s Day to become part of the project of reconsidering the female ideal: to help locate those missing parts, those elements that make up the whole continuum that come under the heading, feminine; parts that have been suppressed, crushed, kerbed and subjugated. It is here that the plural operates, and this exhibition has contributed to its unveiling and liberation.