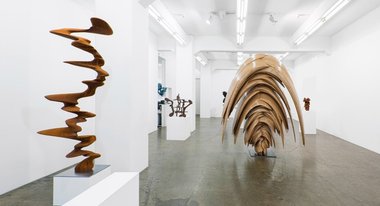 Cragg's early work developed out of arte povera and conceptualist process. Since then as an artist he continued to evolve and constantly surprise, while becoming more traditional in his methods of manufacture. The later work often uses a form of anamorphic logic (involving different lines of sight), blending the craftsmanship and structures of Boccioni (or occasionally, Bellmer) with the wit of Arcimboldo.

With this exhibition Tony Cragg continues a trajectory directed far away from his work of the mid seventies and early eighties—where plastic or wooden detritus was carefully colour-sorted, stacked or pread out, and placed on floors or walls, creating witty ‘drawings’—or a middle period of sculptures where innovative shimmering surfaces featured on constructed or found objects; to the present, where the moving viewer is treated to complicated, fluid, twisting, vertical forms where facial profiles catch their eye, and a surrealist narrative suggested. Traditional materials such as marble, bronze or corten steel are now embraced, along with craftsmanship achieved through a busy studio workshop in Wuppertal.

I’m a big fan of Cragg‘s early work that developed out of arte povera and conceptualist process. Since then as an artist he continued to evolve and constantly surprise, while becoming more traditional in his methods of manufacture. The later work often uses a form of anamorphic logic (involving different lines of sight), blending the craftsmanship and structures of Boccioni (or occasionally, Bellmer) with the wit of Arcimboldo.

Although his choice of materials and processes is now hugely different, there are some commonalities between early and current work. Some of the later sculptures—even though they consist of one solid element—have a stacked appearance (possessing a stratalike texture) where you examine the work directly from above as well as from the side, deciphering different facial profiles. The main distinction is that where previously the placement of the separate elements within the composition was crucial, now it is the position of the viewer moving outside the work that counts.

This applies to five of the eight works. The others don’t have the same sort of visual/location-based hierarchy. Three of the four cast bronzes have a particular fluidity where the texture of the headlike form seems like liquid pouring over rocky or arboreal outcrops that are dramatically tilted at unusual angles. They look geological and eroded, and the facial profiles are not obvious. They take time to discover.

My favourite work here is Hedge, a sculpture where the various arabesque and flat, bulbous, paddlelike elements are spread apart within an imaginary cube-floating in air—unlike the other very solid and very dense, compacted works. Alluding to the spindly branches and leaves of a hedge where the artist used to play as a child, this airy work has a musicality and rhythm that holds your interest. In vivid formal contrast, Elliptical Column, a twisting, zigzagging vertical line of stratified corten steel, capitalises on negative space on both of its sides to suggest multiple visages.

Tempest, a work made of delicately pale, grey-veined marble, looks like a stack of soapy disks about to teeter over. They have a tumbling movement, hinting at sliding body parts making up a torso. The complicated form is highly allusive.

While I miss the rawness of his early and middle work, especially the surprise factor of using found objects—the current sculpture is still distinctively ‘Cragg’ and very much about close looking. It’s highly pleasurable; a treat to spend time with.