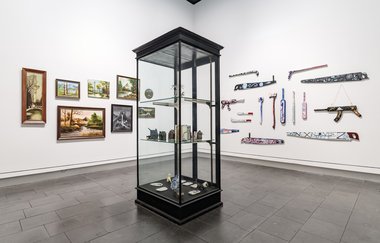 As you'd expect, Vangioni has his own angle. The exhibition is sensitively organised, well structured, and avoids overloading. And there are many surprises—like the gloriously painted saws, hockey-sticks, modified baseball and cricket bats, china plates and Coca Cola bottles, or the funny rhythmical ‘abstract' paintings of hovering, puffing cigarettes, or textual works that celebrate colour—that all leave you with a feeling that here is an artist of inexhaustible energy and wry humour.

Tony de Lautour
Us v Them
Curated by Peter Vangioni

A survey which includes a hundred carefully selected paintings and sculptures, made between 1990 and 2018, Us v Them: Tony de Lautour is spread out over seven varied-sized rooms in the Christchurch Art Gallery. Put together by inhouse curator, Peter Vangioni (who normally curates works on paper), it looks at the artistic activities of this much-loved Canterbury painter, known here and in Australia for his rendered hooligan humour and interest in unseemly ‘low art’ as much as esteemed ‘high art’ historical canons. There is an excellent video of the artist too, chatting with the curator—in his studio, at a ‘post-earthquake’ pub, or with his family.

Anybody who has ever followed de Lautour’s career closely will have opinions on Vangioni’s selection and the weight given to different periods. I myself am especially fond of the ‘bad white art’ chunky canvases (late nineties), of belligerent, muscle-bound, tattooed kiwi-yobbos rendered in thick paint, and also of the hanging canvases (early millenium) of logos that enclose mountain ranges, painted in thin glazes—but this show emphasises the later, more abstract works.

As you’d expect, Vangioni has his own angle. The exhibition is sensitively organised, well structured, and avoids overloading. And there are many surprises—like the gloriously painted saws, hockey-sticks, modified baseball and cricket bats (all modified into weapons); characteristic motifs added to found junkshop paintings, china plates and Coca Cola bottles; or the funny rhythmical ‘abstract’ paintings of hovering, puffing cigarettes; or textual works that celebrate colour—that all leave you with a feeling that here is an artist of inexhaustible energy and wry humour. There are little nods to artists he admires, like Guston, (William) Blake, Schnabel, Ruscha, Walters, Hammond or Robinson, affectionate back-patting flourishes amidst smirks, chuckles and winks about references to art and social history that de Lautour has mingled together.

Lara Strongman comments on his prodigious work output in one of the insightful essays in the informative, lavishly illustrated 224 page catalogue, so you wonder what another person’s pick of another hundred works might be. In his version, Vangioni’s exhibition design utilises large expansive rooms—where big dark pulsing canvases are given lots of room—and three small spaces (sometimes with vitrines for ceramics and silverware), or single walls on which small paintings are arranged in tight groups.

The show is organised so that it is very easy to walk around and make connections. In other words, it is not exhaustingly large, so if you are curious about a recurring motif, like say cigarettes, you can easily track it in a number of works, such as early painted kiwi images, some Revisionist ‘found’ paintings, a ceramic lioness, and the later ‘abstract ‘ Modern Letters works. You could do something similar with cobwebs, de Lautour’s ubiquitous trope for the past.

Looking again at the catalogue, Peter Vangioni contributes the main text, describing the history of his engagement with de Lautour’s practice, and his friendship with the artist. It is anecdotal in manner and gives a vivid account of the music and art scene of inner city Christchurch, before and after the earthquakes (11pp—not counting illustrations)—with lots of good quotes from de Lautour positioned throughout the book. There is also an excellent conversation between de Lautour and his good friend Peter Robinson about their tertiary education at Ilam, and the subsequent decade when their careers took off (6 pp). Then there is a reprint of a somewhat dated Giovanni Intra Teststrip text ‘about’ de Lautour which the artist illustrated (20 pp).

I found particularly interesting the more academic analysis provided in the brief and concise essays of Lara Strongman (3 pp), Alice Tappenden (2 pp) and Zara Stanhope (3 pp). Their erudite contributions examine the role of image accumulation and his collecting; his gradual shift away from satirical narrative towards ‘alphabetical’ abstraction; and de Lautour’s participation in an art historical community of painter contributors, respectively.

The book’s design by Aaron Beehre has a punky look, with its black cover featuring the very large, lightning struck, motif-dense work, Underworld 2, 2006. The publication has no orthodox binding but is held together by blue thread placed through and around the spine. (I’m a little apprehensive of it breaking). I’m also a bit irritated by the use of large font in Vangioni’s text. (Most art gallery devotees have reasonable eyesight.) These however are minor design quibbles. It is obvious that Vangioni has done a great thing in organising this very accessible—indeed thrilling—exhibition and publication. Both have been long overdue.