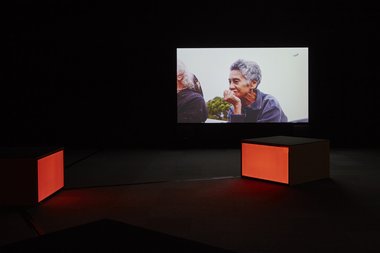 With the screens, sections are sequenced or presented simultaneously, and often sound precedes moving image, audible in darkness before the synched picture appears. The soundtrack in the blackness directs you spatially to the screen—it alerts you to the immanent arrival of the image. That enclosing blackness becomes a metaphor for the unknown future and powerlessness, and Ms Rauti's attempt to gain agency, break free and control her destiny.

This show continues themes that Dieneke Jansen has elaborated on in earlier exhibitions at Te Tuhi and ST PAUL St: namely the eviction by Tamaki Regeneration Company (a Crown entity jointly owned by the government and Auckland Council) of various families in northern Glen Innes from the state houses they had been renting. This is so new housing complexes can be built or that land and/or houses can be sold to property developers—90 DAYS + refers to the time period stated in the eviction notices.

The central figure in this particular presentation is Niki Rauti who received such a notice. She is a member of the gentrification resistance community, Tamaki Housing Group, whose members then in solidarity occupied Ms Rauti’s house, erected barricades, set in place legal stalling measures and organised public meetings, pickets and protest marches. The artist is also a member of this group and so documented the activities centering on Ms Rauti‘s refusal to leave (her family had rented that Taniwha St dwelling since the eighties), events that took place over six years until she eventually accepted an offered replacement house in October 2017—after a High Court bid failed to block TRC’s insistence that she leave.

Installed in the Iris Fisher Gallery, Jansen‘s display involves four screens on different walls, and three seating boxes (in the centre of the floor) where one side of each glows orange, or shows (for political effect) images where key words are colourfully projected on the side of the house. With the screens, sections are sequenced or presented simultaneously, and often sound precedes moving image, audible in darkness before the synched picture (usually of talking heads) appears. The soundtrack in the blackness directs you spatially to the screen—it alerts you to the imminent arrival of the image. That enclosing blackness becomes a metaphor for the unknown future and powerlessness, and Ms Rauti‘s attempt (with her whānau and wider supportive community) to gain agency, break free and control her destiny.

The chronological trajectory of court hearings and escalating expressions of community anger could have perhaps been made clearer with a vinyl timeline on a wall. Whether the show is perceived as lucid or obscure, the gallery blurb says that “the core of this project is to enable and expand the space for politics, to explore gestures that traverse the didactic and the poetic.”

One wonders, is the artist here trying to have her cake and eat it too? There is plenty of political didacticism—especially with the inclusion of a large quote from Vanessa Coles’s 2014 sociological thesis “We shall not be moved” Community Displacement and Dissensus in Glen Innes, Tāmaki Makaurau—and that is not surprising as a reflection of the current polarised artworld zeitgeist, but is there a traversed “poetic” as well?

Of course ‘poetic’ is fiendishly hard to define, as like ‘artistic’ the term refuses nowadays to accept enclosing limitations; except perhaps of art community usage—whatever that ‘art community’ may be. The installation though has a cavelike ambience that verges on the nocturnal where the glowing seats suggest the smouldering embers of a dormant camp fire.

That metaphorical (poetic) element is clever. Its layering reinforces a mood of simmering anger that drives the need to search for conceptual mobility and productive strategy so that communities can outmanoeuvre corporate or governmental bullying. Treatment of space and political content work together.