Human Habitation on the Auckland Landscape 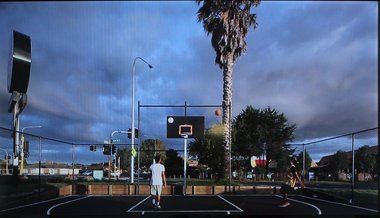 Tótha brings together eleven artists to look at the topography of the Auckland landscape, and local inhabitants' placement of structures over it. The geological undulations are referred to in Tótha's title, Lay of the Land, not only describing the changing vistas as one passes between, along and over the various hill forms, but also alluding to the political/sociological ‘landscapes' too that result from communities having an impact on the geographical ‘physiology'.

Group show
Lay of the Land
Curated by Anita Tótha

This photography and video exhibition looks at the urban environment of outer Auckland, and various types of image connected to transport conduits like motorway and railway. It is organised by Anita Tótha, a Hungarian American curator/blogger from New York - now living in Auckland - who helped set up the Tangent Photography Collective.

Tótha brings together eleven artists to look at the topography of the Auckland landscape, and local inhabitants’ placement of structures over it. The geological undulations are referred to in Tótha’s title, Lay of the Land, not only describing the changing vistas as one passes between, along and over the various hill forms, but also alluding to the political/sociological ‘landscapes’ too that result from communities having an impact on the geographical ‘physiology’.

The two videos of David Cowlard are a crucial ingredient. His examination of some building frontages along part of Great South Road is a little like a movie version of Ed Ruscha concertina book images, except that Cowlard mixes them in with a community focus, such as teenagers taking shots at a hoop with a basketball. His other video is a subtle look at the railway line passing through Parnell, a range of office block vistas and buzzing traffic, in all of which, from different angles, we catch fleeting views of a passing blue and yellow train.

Other contributions feature arterial roading as subjectmatter. Conor Finlay‘s image is of a column or stanchion being built to support an overpass or raised ribbon of highway, while Sean Atavenitia‘s two black and white works show the macadam motorway being extended into rural hinterlands. John Haydn‘s spooky night-time video shows a removed state house being transported by truck to a new location - and looks made by David Lynch - while Talia Smith and Dieneke Jansen zero in on empty sections where occupied family dwellings once stood.

Other photographs like those of Allan McDonald and Peter Evans, deal with housing sub-divisions, and the burgeoning production of inhabitable units on sections. McDonald’s pair of black and white images are positioned close together so that you first wonder if they depict, in fact, a single location split into two. In fact they are from different shots, but make up a single composition when placed together. Unlike, in the front room, Anton Maurer‘s colour diptych of Looking towards Mt Hobson and Mt Wellington from Mt Eden. There in the two continuous images, the horizon line is flush while the butted vertical rectangles are not. A sort of external fault-line.

Next to Maurer, Derek Henderson‘s elegant image of weatherboard, state house facades (Looking towards One Tree Hill and Big King from Mt Albert) is like a cousin. It plays off two sorts of site location, the position of the buildings in relation to the city landscape, and the position of the included satellite dish as link to other communities, other cities, other countries. The image accentuates a common theme prevalent in this show, that of public anger at the social disruption caused by Housing NZ uprooting families from dwellings they have lived in for decades, and reselling the buildings for profit.

Solomon Mortimer‘s black and white portraits are intense depictions of some of the personalities who might live in these buildings. He has a flair for finding weather-beaten, lived-in faces that exude character, that seem to have stories to tell, and his contribution is slightly at odds with the rest of what is basically a landscape show, by virtue of his distinctive interest in body language, clothing and physiognomy.

This is an interesting, quite cohesive show, with a nice dynamic of video mingled with printed images. A lot of photography exhibitions, like those of say painting or video, are humdrum and forgettable, but this presentation has elements that are piercingly haunting. Worth a trip to Papakura to investigate.