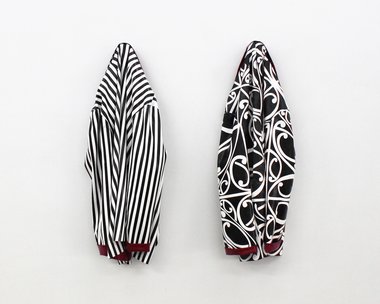 The winner on the night was a deserving recipient of the $20,000 prize. Part sculpture, part painting, the hybrid work was the creation of Rotorua artist, Sarah Ziessen. Entitled 'You and Me. The Weight of History', the nature of its form reaches back to Pop artist, Claes Oldenburg and his plaster made replica shirts, and forward to Helen Calder and her draped paint skin creations.

There were a number of real contenders among the thirty two entries for this year’s National Contemporary Art Award held at the Waikato Museum recently. Selected and judged by Reuben Friend, Director of Pataka Art + Museum, the works reflected, unapologetically, the man’s personal taste in art. And it was noticeable that the aspirants themselves attempted, relatively successfully, to second guess what that might be. Artists are canny animals, especially when large amounts of money are involved.

But the winner on the night was a deserving recipient of the $20,000 prize. Part sculpture, part painting, the hybrid work was the creation of Rotorua artist, Sarah Ziessen. Entitled You and Me. The Weight of History, the nature of its form reaches back to Pop artist, Claes Oldenburg and his plaster made replica shirts, and forward to Helen Calder and her draped paint skin creations.

Mash these two together, throw in a koru design and you have a winner. Her beautifully crafted acrylic skin paint coats, two of them, hang up like garments on the gallery wall, like apparel in anyone’s closet. Ordinary but yet extraordinary. The banal gets a startling makeover.

You might perhaps recall Turkish fashion designer, Gul Agis, who did something of the same with appropriated moko and koru motifs on her textile garments for the London Fashion Show in 2013, much to the ire of people back here who charged her with inappropriate rip offs.

Perhaps with Ziessen’s piece the balance has been restored. Looking at the work now, it almost seems inevitable. What took us so long? The art world, of course, is always on the lookout for the next new thing, and Ziessen’s work seems to placate this craving in a particularly satisfying manner, by drawing on elements that already existed in the milieu and injecting them with new life in the simplest and self-evident sorts of ways. It almost had to happen.

Of course it wouldn’t be a contemporary art award without some silliness and pretentious goings on in the mix and we get it in spades with Martin Awa Clarke Langdon’s in-situ installation which consists of a small roped off area in the gallery with, you guessed it, nothing inside. All very conceptual and banging on about display and art value and the institution, again.

Of the rest, Mark Curtis’s photograph of the inside of a small disused storage room in the basement of a high-rise building in Hamilton, was arresting. Space Raccoon Gang: Everything is Connected refers to the fact that a homeless (and perhaps mentally unbalanced) person had been living in it and decorated the walls with a kind of chart map that included random newspaper clippings and annotated Post-It notes which were interconnected at various points with thin strips of red tape. Equally disturbing and voyeuristically fascinating, poignant and somewhat pitiful. A readymade commentary on the times.

Brett Graham’s Land Swallowers 2 was a meticulously crafted wood etching that addressed the issue of land confiscation in the Waikato, and the land theme continued with Lee Harrop’s The Lie of the Land, an engraved core sample, a cast-off collected from mining exploration and turned into a “geological totem”.

Landscape painting, as a genre, was examined by Natchez Hudson, via an enlarged photograph of a small canvas, while Marie E. Potter’s Land of Hope worked the same topic.

Among the works that earnestly explored the discourse of ethnic minorities, gay politics, land appropriation, cultural values, commercialism, consumerism, depression, museology, heritage, social identity, gender issues, addiction and colonization, there was one small and unassuming minimalist collage on canvas by Amanda Densham, simply called Horizons. It was not about any of the above, or the “aleatoric nature of our privileged human instant”, but was simply an arrangement of flat surfaces using three intersecting monochromatic panels, finely scrubbed and brushed to create a variety of quiet white and off-white horizons. A small aesthetic delight for the eye among all the ardent, zealous and otherwise heart-felt creations.

New methods and materials also featured in the exhibition. Kereama Taepa’s Consumer Culture used a 3D printer to create a wall sculpture; Monique Lacey employed cardboard and plaster to construct her relief piece All that Glitters Ain’t Gold; soap and aluminium foil were used by Rebekah Rasmussen to create her sink plug Down the Drain, while Tessa Ma’auga took cotton and wool to construct her land-referencing weaving, Aho Mutungakore.

Of the video works, Kyle Sattler’s Accidental Opus, Configuration 3 was the most visually pleasing, playing with abstraction and formally displayed electronic notations complete with sound in satisfying ways.

This nineteenth National Contemporary Art Award had something for everyone, but most pleasingly of all, a worthy winner, whose work spoke to the culture on so many different, engaging, thoughtful and aesthetically gratifying levels.