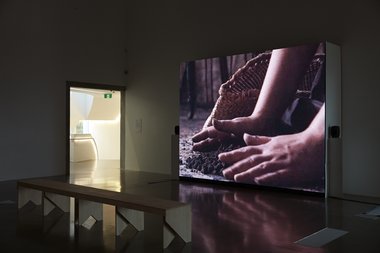 The title comes from Barclay's notion of turning the camera on the beach so that it looks at the coloniser as well as the colonised, out to sea as well as inland. So that Māori have full agency and control of representation of themselves.

This moving image show is a tribute to the pioneering achievements of Merita Mita (1942-2010) and Barry Barclay (1944-2008), the charismatic and eloquent film and television programme-makers who tirelessly advocated films made by Māori, about Māori, for Māori. Consequently Te Uru presents ‘hommages’ made by six ‘coloured’ contemporary film-makers—not necessarily all Māori. The contemporary artists picked by Ioana Gordon-Smith occupy three large galleries, and along with programmed screenings of Mita’s and Barclay’s films, there is a free anthology—published by Te Uru—of interviews with and articles by Barclay and Mita.

The title comes from Barclay’s notion of turning the camera on the beach so that it looks at the coloniser as well as the colonised, out to sea as well as inland. So that Māori have full agency and control of representation of themselves.

In a way, the superb Mita and Barclay publication overshadows the six contemporary artists who would have benefitted from an in-depth takeaway publication of substance too-though the wall labels are good. Artspace and Te Tuhi do excellent hand outs about their exhibitors, and some bios and discussion about the work on the gallery walls—for home absorption—would have been helpful here.

Probably the two contributions getting most attention are the works by Tanu Gago and Lisa Reihana, Gago because his partner (Pati Solomona Tyrell) is a conspicuously successful finalist in the current Walters Prize line up (it’s similar work) and both are key players in the FAFSWAG Pasifika LGBTQI Collective, and Reihana because her Transit of Venus contribution to Oceania in London is attracting a lot of commentary, and interviews in the English press.

With Gago’s wide screen presentation we see silhouetted figures dancing, split and mirrored as they move to vibrantly percussive music, and then switch to a series of assertive (no nonsense) portraits of the troupe. Like some of the Tracey Moffatt videos on the same floor, the music summons you to the screen so that—with the mesmerising and compelling imagery—it is hard to leave the room.

Lisa Reihana’s Native Portraits are pretty seductive with their sumptuous period costumes, studio props, and humour. They feature actors or friends playing the roles of colonial photographers and Māori subjects. Usually the photographers are droopy moustachioed English twits and the models, glamorous (very smart) Māori women, who are several streets ahead of the camera operators and unwilling to be compliant or tricked. Reihana’s videos are politically unambiguous, and often caricature stereotypes to be entertaining. While some of it is over obvious, in this suite of stories there are plenty of pithy issues to think about.

Tuafale Tanoa’i aka Linda T is normally known as a DJ, but she is obviously a whole lot more than that, with a range of community projects beyond dance parties. Here she presents a series of videoed interviews with various creative personalities within the Pacific and Māori and LGBTQI communities, using a set constructed in the gallery that we can see, and a shooting schedule drawn up on a blackboard. Included also within the monitors are some other earlier interviews she has been inspired by, involving Mita and Barclay.

Nova Paul is known for her gorgeous colour-separated films but her digital work here avoids seductive sensuality or technical wizardry, and is much more politically direct and embracing of documentary—dealing with land ownership issues—clearly fitting in with the ethos Mita and Barclay espoused. One (Ko te ripo, 2018) has Dinah Paul talking to Nova about treaty claims involving the Panoho whenua at the foot of maunga Whatitiri (near Whangarei); the other (Ko ahau te wai, ko te wai ko, 2018) shows the meandering trajectory of the Waipao Stream, as it makes its way towards the sea.

Tracey Moffatt is an international art star, one who obviously waves the flag for the Aboriginal community while living in both New York and Sydney. I can remember hearing her speak in 1985 in ANZART in Auckland when she insisted that she didn’t want to be seen as an indigenous artist. Of course there is no reason why she can’t straddle both camps—things have greatly changed for the better: it is easier now (she can have her cake AND eat it)—and the three works here show the passion and wit of her ideas.

One (Night Cries, 1989) is a directed short film about an elderly frail white woman and the Aboriginal housekeeper who is reluctantly looking after her, and the other two (Lip, 1999, and Other, 2009) are montages of appropriated film clips (from classic Hollywood movies) that have vibrantly percussive soundtracks. They have been brilliantly edited by Gary Hillberg, and are sensational. They thoughtfully expose racism but they also make you laugh—especially when they are about cross-cultural horniness and the flipping over of power relations.

Robert George’s five channel video, installed in five vertical plasma screens on the wall, looks at the rural district of Horohoro, focussing on themes such as the local road, marae, fencing, running stream, meeting house, carving, local bush, ferns and footpath. It looks at the community, but instead of interviewing people it dwells on the materiality of the prosaic—the textures and substances of the everyday. It subtly alludes to the unseen, dwelling on the spiritual element without stating it. Unusually restrained and nuanced.