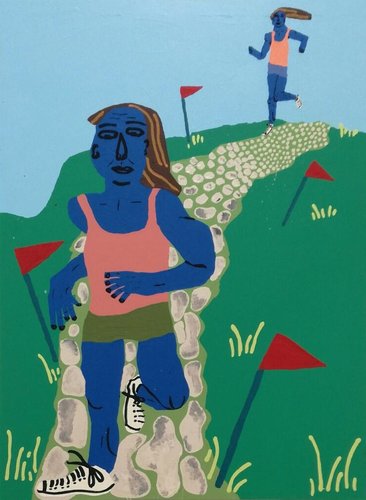 These competitions always present a mixed bag. It's simply the nature of the beast. Style-wise there was everything from the school of naivety, realism, abstraction, conceptual, digital and back. No single or even cluster of themes emerged. One can only refer to samples.

Selected and judged by Kim Paton

Kim Paton, Director of Objectspace, was this year’s judge of the New Zealand Painting and Print Award in Hamilton recently, and its new venue (instead of the Pavilion in the Gardens), the Wintec Atruim with its soaring high roof and quasi industrial look, set the scene for the annual round of art glitz and glamour. There was a stage, seating, patrons and invited guests done out in their finest; and then there was the art: 41 works in total. And—in case you are curious—a big prize of $20,000.

These competitions always present a mixed bag. It’s simply the nature of the beast. Style-wise there was everything from the school of naivety, realism, abstraction, conceptual, digital and back. No single or even cluster of themes emerged. One can only refer to samples.

Ibell is well known for his enigmatic images of faceless people involved in slightly mysterious encounters, and his The Collector Reflecting on the Wisdom of Objects (with Undiscovered Letter) was no exception. His geometric compositions, minimalist in configuration, hint of shadows and ubiquitous and cryptic doorway conjured feelings of a wistful stasis. The commonplace becomes elevated in the artists hand as the man in the painting bends forward toward his ceramic collection of pots. But the presence of the undiscovered letter provides the charge to an otherwise banal narrative. In all of this there exists something here of de Chirico, in a lower key.

The employment of abstract notation in the more realist figurative work of Heather Campbell, is less direct, but its subtle use contributes tellingly to the poignant mood of the painting. Entitled ‘Deported’ - mugshot, 1928, Sydney, Campbell has taken a 1920’s photograph and translated it into a testimony of female helplessness and vulnerability. The mugshot used is of a French woman, Marie Louise Aubin, charged with prostitution and deported from Australia during the Jazz Age. The dark abstracted background serves to intensify the sense of singular aloneness and abandonment the woman is experiencing, while the symbolic colour of the dress, the high angled view, the turn of the head, all contribute to a moving and affecting portrayal of grief and discrimination perfectly executed.

In complete contrast, but still with a disquieting element, is Helen Dowling’s figure work, an untitled image of a man seemingly disgorging something that looks like ectoplasm from out of his mouth. Dowling mines this area of the slightly bizarre but in an understated manner. Even the off-centre placement of her subject contributes to the unease of the image. Off-beat is the artist’s stock-in-trade and here the gridded format and pale hues provide the exact mix to perturb and throw the viewer off balance.

Mystery is something also explored by Amanda Watson in her expressionist style brush work to create an atmospheric landscape. Here the control of colour—muted pinks, blues and orange, and the hint of diagonal forms breaking the vertical lines—all back a brooding even foreboding scene, shot through with shards of wonder.

The colour blue predominates in Krystie Wade’s abstract, Entirely Remote, relieved with a single band of pink. She quotes Kandinsky and his belief in the spiritual influence of colour, blue being that artist’s favourite. It is the play of the inscrutable abstract forms themselves that give the work its edge.

Colour crowds Laura Williams naïve rendition of Tenderness 11, a still life with a difference. While the primary subject of the painting is a very large traditional bowl of flowers, painted in her trademark ingenuous style, it is the presence of tiny ceramic figures included in the painting — a couple and a cow, isolated on a platform, plinth or island of green, that captures the eye. It is a bucolic scene, consciously evoking the twee, the sweet, the sentimental, to capture an Edenic image that can only ever be treated today with such ironic annotation.

A related theme, expulsion from the Garden, with political overtones, took out the merit prize, a work by Telly Tuita, that has Adam and Eve—code for colonials—expelled from a Pacific island paradise.

And the winner is Claudia Kogachi, paradoxically with a figurative rendition of a competitive race. Her Mom Wait Up harks back stylistically, to the German expressionists, but with a good deal more naivety. This work and its subject is typical of her ongoing narration, that presents conflict between mother and daughter, staged in a metaphoric and slightly comic way. The colour blue is always used to depict the bodies of her protagonists, while no modelling is utilized whatsoever, the bright paint simply applied thickly, flat and undifferentiated. It is an art that consciously mimics the untutored practitioner. Simple and wilfully unsophisticated.

The sheer range of art practices that shows like this throw up, remind one that the plural is in the ascendency and that we are all the better for that.