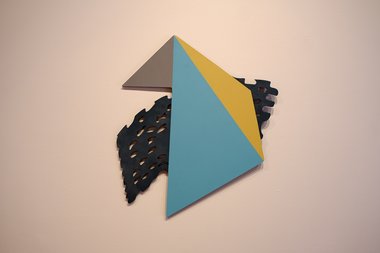 The question of perception is a contemporary one at a time when the notion of difference has become a prevailing anxiety, together with the accompanying spectre of relativity that haunts the time. But these questions are also age old, as old as the duck/rabbit conundrum. At another level, the dynamic of appearance and reality, of course, reaches back as far as Plato.

Abstraction has had many lives and presented a thousand different faces to the art world over the course of its history. It keeps being reborn, renewed and regenerated by a succession of contemporary art practitioners who engage in the process of mixing, matching and morphing forms from the oeuvre.

Take a piece of Frank Stella, mix in elements of Carmen Herrera, add a dash of Judy Millar, a trace of Harvey Quaytman, bits of Elizabeth Murray, Imi Knoebel and Mokha Laget—and what do you get? You get Claudia Avril, recent graduate at Waikato Wintec, currently exhibiting her colourful and funky layered abstracts at Ramp Gallery, Hamilton.

These works hover ambiguously somewhere between wall sculpture and painting, sometimes using acrylic sheet, or else, ACM panels. They have a Pop Art feel to them—think Roy Lichtenstein and his Benday dots—but they make no reference to things representational. They tip their hat to Frank Stella in their geometry, but the notion of flatness is subverted, or at least played with, by consciously creating the illusion of dimension.

The fold is Avril’s preoccupation. Indeed, many of the works use a numbered “Fold” as their title. It is like origami meets high art resulting in an energized hybrid that sees coloured triangulated forms set off against a black perforated ground. Only the latter is an illusion. Ground and foreground are all of the same piece. It is a little reminiscent of something sculptor Neil Dawson does with his constructions. ‘Three dimensional’ is actually flat. The performance between illusory and actual plays itself out in a little magical dance that extends the ‘painting’ into an abstruse and enchanted space.

The curve is another illusionist interest the artist employs. Fiona Pardington chose one of these ‘bowed’ and punctured works to be included in the current National Contemporary Art Award. Perception is the thing at work here, and what you see is sometimes not what you get.

The question of perception is a contemporary one at a time when the notion of difference has become a prevailing anxiety, together with the accompanying spectre of relativity that haunts the time. But these questions are also age old, as old as the duck/rabbit conundrum. At another level, the dynamic of appearance and reality, of course, reaches back as far as Plato.

Avril plays with all these elements in her “expanded paintings”. Illusion has been the stock-in-trade of art, historically, which the modernist era saw fit to rebel against, but Avril is not so much a dissident but a magician who revels in the trompe-l’ oeil ‘dishonesty’ of it all, playing with the baroque folds that “unfurls all the way to infinity”, as Gilles Deleuze puts it.

It was Einstein who first alerted us to the relativities of time and space (coinciding with the birth of modernism), and this fluidity is one the artist finds congenial as she ‘bends’ and manipulates her figure and ground coordinates. The result is that the viewer becomes an active participant in the construction and deconstruction of ‘reality’.

Tonal variations on the surfaces of her work are part of the project, but she also employs abrupt shifts of colour, form and texture to achieve her pictorial ends. Conjunction of opposites is an effective ploy that also serves to surprise the viewer.

But it is not just the illusionistic qualities that make these works so engaging. Avril uses an astute combination of colours in her work. Black offsets the use of greys and pinks, greens abut reds in a satisfying manner, while mustard yellow softens and warms against blues. Some of this is 1950’s retro, which fits neatly thematically and contextually with the period that saw the Americans take the world by storm, art-wise, with their embracing and reinvention of abstraction. It’s a clever reference point.

As well the juxtaposition of smooth, flat and unmodulated colour of the triangulated forms against the oval perforated surfaces produces a startling and energetic visual frisson. There is almost a configuration here that sees singular geometry confront the suggestion of something that just falls tantalizing short of representational. The unusual alignment is invigorating.

Folds and curves have never looked so astute, so deliciously sumptuous. Claudia Avril has employed her influences well and produced something fresh and exciting, which is what we essentially ask of all artists who engage in the project of ringing the changes.