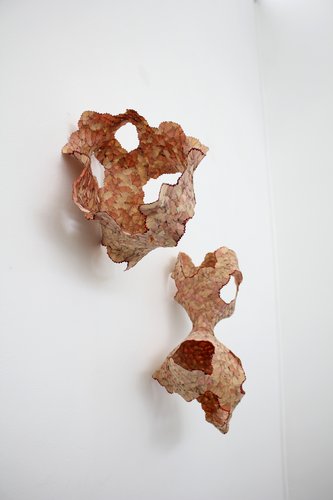 The other sculptural forms in the show are the work of Ada Leung. They have a similar biomimetic shape, hollowed out, but wafer thin. These delicate constructs are made up of pencil shavings painstakingly glued together, resembling disembowelled autumn leaves. Called Fungal Blooms, they hang skull-like high off the gallery wall, ephemeral plant creatures that look as if they might disintegrate at the merest touch.

In 1970 it was The Greening of America, courtesy of Charles Reich; now it’s a plea for the greening of the planet as the world confronts a global environmental crisis. As if in sympathy with such an appeal, curator Laree Payne with Fertile Grounds, has had the walls of the Calder and Lawson Gallery painted green to enhance an environmentally themed show that presents the works of five very diverse art practitioners.

Nicola Farquhar contributes paintings that take the portrait outline (head and shoulders) filling the space with a dense conglomeration of flowers and leaves, slightly abstracted. Here is nature personified, a reworking of the image of the Green Man, or woman in Farquhar’s case, face covered in foliage, recalling the vegetative deity found across many cultures, symbol of nature’s rebirth.

The artist has updated the pagan image that ironically, was often found carved in medieval churches, denoting perhaps a bridge between the old beliefs and the new ones of Christianity. They were both, of course, about coming back to life after death. This ‘keeper of the forest and woods’ has found fresh legs in our time of ecological troubles and Farquhar has reused it as another symbolic bridge. That she employs the appearance of a woman suggests she is also drawing on Roman mythology in the form of Flora, goddess of flowers, and the idea of new growth in spring.

The paint application is rough and raw in true expressionist fashion, recalling German artists from the turn of the twentieth century. This movement (Die Brücke: The Bridge) also had a ‘back to nature’ theme in their revolt against what they saw as the deleterious effects of the industrial revolution. The most successful works are those that show the least anthropomorphic features, as in Sha-shay. If too literal the image becomes a little cloying.

The ceramic sculptural forms of Andrea du Chatenier, globular and organic, seem to have bubbled up to the surface from deep underground in some kind of volcanic eruption, and solidified in the shape of small Gaudi-like architectural constructions.

Life itself is postulated to have arisen out of these hot magma locations around 3.7 billion years ago in deep-sea hydrothermal vents, and the Martin clay glazes of Earth to Earth do possess something of the look of those early encrusted stalagmite mounds, where acidic seawater collided with alkaline fluid from the Earth’s crust and the miracle of life took place.

The title of these works takes its cue from the Christian burial service, the words adapted from the Genesis text. Beginnings and endings are thus referenced here with religious overtones that take us back to the ‘original’ creation act itself. The great wheel of life is invoked, and these orange eviscerated biomorphic vessels speak directly and boldly of both life and death.

The other sculptural forms in the show are the work of Ada Leung. They have a similar biomimetic shape, hollowed out, but wafer thin. These delicate constructs are made up of pencil shavings painstakingly glued together, resembling disembowelled autumn leaves. Called Fungal Blooms, they hang skull-like high off the gallery wall, ephemeral plant creatures that look as if they might disintegrate at the merest touch.

The method of construction evokes the recycling ethic while the fragility of the forms speak to the tenuousness of life itself—as the world encounters the uncomfortable truth of planetary Armageddon. These vulnerable and precarious shapes, denoting the earliest plant formations (600 million years old), toadstools and the like, also conjure with the enchanted domain of Germanic folklore—the elf world—a reminder of modern disenchantment and the need to return with reverence for flora and fauna at a time of ecological emergency.

Denys Watkins, the elder statesman of the show, has had an evolving career that has traversed the polar ends of the art spectrum: from figurative to abstract. Lately he seems to have gone green as he explores the microbial world in Another Green World, where microscopic amoebic-like forms float about against an essentially flat dark green ground.

One could argue that he has always had one whimsical eye on things environmental, given works from the past like The Fall of Captain Musick, 1990. His Everyman figure tumbles headlong through a moody South Pacific sky into the sea, complete with South Pacific maiden ready to rescue him as he clutches his prize, a golden pineapple.

Watkins’ current abstract creations are part homage to Miro, part dance of the seven orbicular bubble creatures. We are down in the ‘invisible’ realm of single celled animals, jostling about for position, a world made fantastical by a magnification that turns this microscopic kingdom into a large colourful arena.

This territory always hovers deliciously between two worlds. We are not allowed to forget that Watkins’ playful manipulation causes the profundities of abstraction to mingle with the more rotund vernacular elements of biological existence. It’s an amusing hybridization with a touch of Pop Art aesthetic thrown in the mix.

The title of his largest work in the show, Sinbad Gully, is a reminder that the artist is traversing a territory full of magical eccentricity complete with ‘monsters’. In the context of the exhibition, they also address the fundamental constituents of life and their value. The little guy is important and needs to be given his due.

Photographer, the late Peter Peryer, was like Watkins, someone who captured the slightly surreal and arresting— inside the ordinary life of things—conveying the startling beauty of the process as well as the offbeat nature of the subject. His Buddha’s Hand is a prime example, a plant formation that because of the cropping, and black and white photographic treatment, resembles the form of an otherworldly hand; some Triffid-type creature, tentacles extended like something alien and extra-terrestrial, yet involved in a supplicating gesture. The spiritual quotient of the title is there to remind us of the transcendent that inhabits these ‘ordinary’ natural forms.

The hand motif is explored further in works like Tendril and Julianne’s Hands, while Veil, a coloured photograph of a singular cape gooseberry set against a black background, presents a jewel-like fruit inside a transparent leafed mesh cage. Nature never appeared so refined and special.

Nature has always been a fertile ground for artists to explore, and this suite of works, brought together in the show, have demonstrated a timely expression of her qualities and values—and the need to attend without tardiness to her constituency.