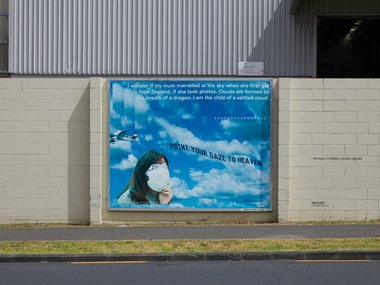 The layered and complicated meaning of the show's title continues; it can be drawn out further. As a semaphore taken from a North American First People's coding system, it could be a warning—but maybe not automatically—an indication of xenophobia, racism, or paranoia. Or a legitimate apprehension about the advancing of a new form of colonialism in the Pacific.

The title and image-content of Vanessa Crofskey‘s billboard project seems to be ambiguous—the depicted smoke is like puffs of fluffy cottonwool clouds, or hot geothermal steam or rising vapour—standing ostensibly for intangibility or transience in an ironic reference to the perception of migrants from the more ‘permanent’ locals.

Crofskey‘s heading is designed to be about ‘natural’ inhabitants versus ‘alien’ ones; hostility to Asian, or more specifically in this case, Chinese. If you see it as more steam than smoke though, then you might perceive it as of the land itself—and the land’s first people. Its political significance can be read either way. Espousing opposite views simultaneously.

This layered and complicated meaning continues; it can be drawn out further. As a semaphore taken from the North American First People’s long distance coding system, it could be a warning—but maybe not automatically so—an indication of xenophobia, racism, or paranoia. Or a legitimate apprehension about the advancing of a new form of colonialism in the Pacific.

Aside from the multi-levelled (at times contradictory) politically volatile title and wispy gaseous imagery, Crofskey’s street-aligned project looks at the aspirations of Chinese migrants through a soft, pale blue, denim-like texture that denies the firm surface of the digitally printed pixilated hoarding; it is a delicate backdrop for the floating fragments of social activity and bands of community-referencing text.

‘Welcome (Huān Yíng Nĭ) to New Zealand’ the central billboard states, Aotearoa being of course the Land of the Long White Cloud. On the righthand side, the artist is amazed that the cloud looks like dragon’s breath and seems ‘settled’. On the left, the text constantly refers to the traditional gustatory pleasures enjoyed by the Chinese community, mingled with allusions to warmth, moisture and steam, and the chit chat of family.

However the collaged (Photoshopped) images are even more ambiguous than the title. Face masks are shown several times, and can be about fears of breathing in pollution (perhaps an allusion to fearful ‘local’ influences) or stopping (ironically? generously?) the breathing out of contaminants that will injure the established residents. One mask covers the eyes so that the female breather wearing it is blind. (‘See no evil’ perhaps?)

Crofskey‘s presentation is slippery, and wonderful because of that. The ambiguity draws you in, refusing to spoonfeed the viewer with a moralising reductive message. These image fragments are complex in their denotation, diving and ducking and shuffling around as you try to push them into an interpretative corner.

Firm conclusions though are not important. This is a lovely work to mentally investigate. Whatever your ethnicity it has much to offer.