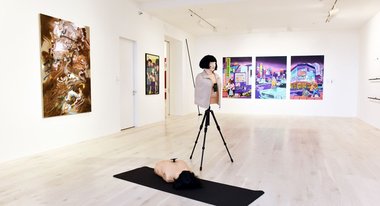 The choice of work (and of the linked educational sources-as there are other facilities too in this city) depends on the taste of Anna Jackson, the Gow Langsford director, so it is not a presentation of upcoming ‘stars' from the ‘best' tertiary institutions—but a nice way of checking out some of the types of talent that are now emerging. The work is interesting and sensual, without claiming the existence of any underpinning threads of conceptual or technical unification.

In this adventurous dealer gallery show we have a diverse selection of work from nine student artists studying at three Auckland art schools (Elam, Whitecliffe and AUT). The choice of work (and of the linked educational sources—as there are other facilities too in this city) depends on the taste of Anna Jackson, the Gow Langsford director, so it is not a presentation of upcoming ‘stars’ from the ‘best’ tertiary institutions—but a nice way of checking out some of the types of talent that are now emerging. The work is interesting and sensual, without claiming the existence of any underpinning threads of conceptual or technical unification.

Andrea Bolima’s modestly sized, softly coloured canvases, with their blurred ambiguous forms made through the dry brushing of thin acrylic, could from a distance be mistaken for stained colour or wet application. Using landscape or vegetative colours and no sharp edges of shape, Bolima creates a spatial tension between the flatness of the canvas and suggestions of flowers, leaves, copses or cliff-faces. She is expert at creating linear gaps between adjacent blocks of thin colour, so that the pale hues underneath form fragmented bending lines that are nuanced and suggestive.

Chantel Matthews presents three brooms with very long handles, one being exceptionally elongated. They could represent the democratising performative labour promoted by Joseph Beuys, or the early novel by David Foster Wallace. They also appear to be pool-cleaning brooms but with comparatively narrow bristle-heads that enable only limited pool-bottom sweeping. That turns these subtly surreal tools into a humorously caustic comment on the aspirations of the monied classes who at times can be thwarted in their political efficacy.

Eleanor Cooper’s gorgeous hardwood fighting staff (inlaid with decorative patterns of bladder kelp bulbs) has a definitive intended function—to enable DOC rangers to tag sealion pups while using this Bo staff to fight off angry parents karate style. Apparently rangers are given broomsticks for such purposes, so this witty variation is an entertaining (beautifully crafted) exercise in functionality, while for galleries it extends the formal possibilities of ‘leaning pole’ artists like Peter Robinson and Andre Cadere.

Grace Wright’s large energetic paintings are like rococo monoprints on canvas, made with thin oil paint and populated by a plethora of convulsing organic squiggles. These lines of squirming undulating viscera, like shoals of arabesque herrings—or streams of puffy clouds—charge across the picture-plane against backdrops of slyly blended agitated colour and carefully composed swathes of dark tone. The brushed-on marks—though frenetic—are varied, and exude exuberance, celebrating the spontaneous movements of the artist’s sweeping arm and twisting wrist.

Melanie Hall’s faux antique vases, like the prints of Christchurch artist Marian Maguire, mingle references to Māori and Greek mythologies—both artists referencing the cultural framing of some of the early colonial settlers. Hall’s elegant ‘Attic pots’, standing on plinths, present dark figures in profile against a red oxide field, involved in martial conflict or everyday tasks, and feature updated weapons. In a contemporary art gallery, Hall’s sculptures are unsettling objects, being ordinarily linked to Classic collections in museums that seem to have migrated. Such artefacts are impeccable and mysterious—while also logical.

Rohan Hardy’s framed collages of domestic interiors, made with old wallpapers, paint swatch samples and white-inked lines, are an intimate treat—more engrossing than her much larger rebuslike painted hangings of freefloating, isolated fittings, that are placed nearby. You are drawn in to enjoy the subtle relief of cardboard and textured paper, and the tension between their cut-out accentuated flatness and the architectural perspective that generates spatial recession.

Peng Jiheng’s two black-wigged androgynous mannikins-one vertical, the other supine; their revolving green hearts on prominent smartphones—aurally and textually speak of multiple selves inhabiting single bodies, indicating also that the phones could be foot pedals for massaging a cybernetic cardiac revival. There is an amusing ambience about these plastic limbless sculptures. They could be tongue-in-cheek.

Vivian Jin’s digitally-processed ‘screened’ banners recall last century’s savage conflict between Korea and Japan, and Japan’s well documented atrocities. Flat, unmodulated images of civil unrest, torture /execution dungeons and forced prostitution are included. Blunt in their expressed anger at the one-time conqueror’s brutality and horror, there is no attempted pretence of reconciliation. These images are openly emotional; unrepentantly so. Clumsily obvious, in fact.

In Christchurch, Holly Best has curated a related nationally-sourced exhibition, Uncomfortable Silence, for Christchurch Art Gallery Te Puna o Waiwhetu. Some Aucklanders like Shiraz Sadikeen and Meg Porteous are included. It opens just after the above Auckland show closes.

Here is a link to the website of Christchurch Art Gallery Te Puna o Waiwhetu, looking at the writing promoting ...

Here is a link to the website of Christchurch Art Gallery Te Puna o Waiwhetu, looking at the writing promoting 'Uncomfortable Silence.'

Alas, there are no online images of the actual exhibition installation. It would be nice to know more (visually) about the actual artworks--their spatial interaction--how the show is organised in situ.