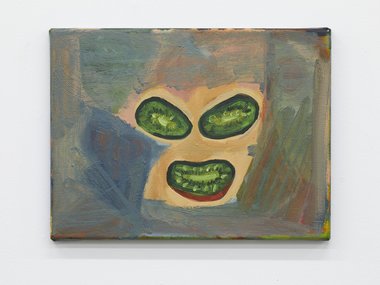 It is such a simple idea to render visages this way, the face being such a primal and immediately recognisable subject matter, and fruit usually suggestive of humour (if slipped on), rage (if thrown) or conventional gustatory appetite. So simple in fact, it might be regarded as corny, or even plain silly. And if funny, then not witty.

According to the gallery blurb, Layla Rudneva-Mackay’s current exhibition of twenty, different sized, Symbolist / Expressionist oil paintings (on show at Starkwhite) were made during a time of severe pain, from complications from invasive post-natal procedures (involving medical misadventure). Here is an audio work discussing it, contextualising her bedridden activity through an imaginary conversation with deceased and living members of her family and the legendary Mexican artist Frida Kahlo.

Yet, as is typical of art, there are many ways of thinking about these extremely varied images. Some are fragmented with hovering isolated curved marks; others are more geometric and architectural.  I’m particularly attracted to those of cut up fruit, arranged on plates to form physiognomies. Interpreting them goes far beyond that of say, facial expressions of agony, or mutilated fruit representing the fecund (but tortured) female body. You would never normally think of pain or torment.

One work (with angular pointy star shapes, and originally on the gallery website but not now in the show) seems a vague reference to the cat paintings of schizophrenic artist Louis Wain; another the Mighty Boosh Moon. Other paintings might refer to Redon or Hodgkins. A laarge group however look like depicted masks made from woollen balaclavas, suggesting the presence of ‘terrorists’. There is the use of paint or implied fabric to hide parts of the human face, a theme present in at least two excellent earlier photographic series she has made.

These loose brusherly paintings with the three or four (ie. with an added nose) isolated facial elements are (I think) the most interesting, with their floating fruit forms looking sinister—even when clowns with cherry noses are suggested. They are surreal, with such commonplace breakfast or dessert food appearing confrontationally as if in nasty dreams. Being eyeballed by a trio of hovering sliced kiwi-fruit is not exactly an everyday occurrence.

It is such a simple idea to render visages this way, the face being such a primal and immediately recognisable subject-matter, and fruit usually suggestive of humour (if slipped on), rage (if thrown) or conventional gustatory appetite. So simple in fact, it might be regarded as corny, or even plain silly. And if funny, then not witty. There is a permeable dumbness about it. After all, it is just an inverted triangle composed of three carefully positioned juicy botanic edibles.

Some curved linear fruit (like bananas or pieces of melon) make eyes and eyebrows look alarmingly like mouths (hints of Jasper Johns), or if rotund (like split apples or oranges) mouths then become eyes. Mouthwatering if consumed, but menacing as biters or malevolent watchers.

Being stared down by pieces of hostile fruit is not likely to make you cower under the kitchen table, no matter how hostile the vibes. Even if grimacing and leering, their soft fleshy forms can be easily smashed. So therefore the spiky Wainesque painting seems oddly more exuberant and celebratory than indicating severe mental anguish. It is sunny and bubbly. Happy. (Maybe that’s why she took it out.)

This exhibition is infinitely more interesting than this artist’s show of conventional flower paintings of a few years ago. As improvisations, they are overtly nutty (even if linked to pain), being quite unusual and jammed full of mixed messages; rich in puzzling (playful and humorous) contradictions. All the better for them.