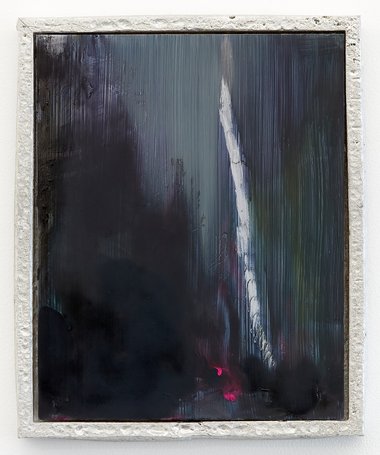 This small collection of atmospheric works, presented under the title, Yore—conjuring a mock nostalgic recollection—is perhaps alluding to the fact that these whipped up visceral neoexpressionist paintings in a minor chord, are all that we can presently manage when it comes to the transcendent.

“Through a glass darkly.” That was the thought that first came to mind when I initially saw the work of Tyne Gordon at Weasel Gallery, in Hamilton. They are small and intimate textural paintings, but most of all they are dark. They are also completely abstract which perhaps adds to the notion of things to do with obscurity. And the framing, in addition, suggests the configuration of windows or mirrors, thus the line from St. Paul seems apposite.

The Biblical writer of the book of Corinthians was speaking, of course, about transcendental matters and their blurred and opaque nature. Most contemporary New Zealand artists today cry shy of such spiritual concerns. Maybe we had our fill of them courtesy of McCahon. Or maybe we are just too secular and profane to care.

Today the trend is to valorise the idea of the collapse of meaning, adding to notion of the fogged mirror. Richard Rorty reminds us in Philosophy and the Mirror of Nature, what everyone from Plato down has banged on about for centuries—that reality, ultimate reality, is one step removed from us. Ambiguity and opacity is the name of the game.

Wanderer Above a Sea of Fog was also dark, but at least Casper David Friedrich gave us the wanderer and the view, while Gordon only gives us the mist, the haze, the spray and the drizzled film. But this is the twenty-first century and like Mark Rothko with his misty geometrics, or the more amorphous Helen Frankenthaler, the language of abstraction has to do.

Are Gordon’s works really about the sublime in miniature, but with rather more murk? Certainly there exists in these small splatterings and dribbles of paint, plenty of gloom and obscurity. But something in the melee of brushstrokes often shines through. One of the works, Gleam, directly refers to a shaft of light, helped along with the use of glitter. Drenched in dark purples and moody blacks, this piece, surrounded by a glass and resin frame, suggests a clearing in some heated tropical forest, all overgrown and luxuriant, albeit dressed out in sombre tones and hues.

Something of the same is seen in Shiny Over Dirt, this time in a pewter frame. The ordinary and very humble is thus given a translucent quality, the meaning and significance of which recalls an episode in Patrick White’s novel, Tree of Man, where the main protagonist, Stan Parker, a gentleman long acquainted with the earth, spits on the ground, points to it, (a “jewel of spittle”… “glittering intensely”), and declares that it is God—in response to a young evangelist who is attempting to convert him with tracts and pamphlets.

A work like Crag recalls the McCahon waterfall paintings (Waterfall No 6 ,1965-6, in particular) that present a shaft of white water spilling over or out of dark landscape forms, with all the spiritual symbolism associated with that. But Gordon’s treatment of paint here is much looser, less controlled, more splash and dash, liquid, chaotic and messy, more soupy and gestural than say, Gretchen Albrecht. One recalls, also, at this point, the dark brooding swirls of a van der Velden at close range”.

This small collection of atmospheric works, presented under the title, Yore—conjuring a mock nostalgic recollection—is perhaps alluding to the fact that these whipped up visceral neoexpressionist paintings in a minor chord, are all that we can presently manage when it comes to the transcendent. The days of the grand, romantic declarations of Friedrich, Rothko and McCahon belong to a former age which we can only wistfully, or ironically, look back on.