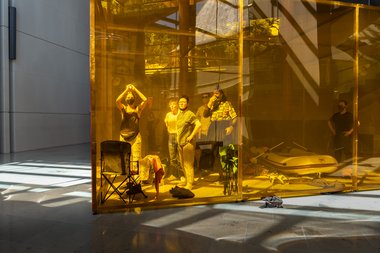 The work's title references the extreme smoke pollution indicators for the Air Quality Index at the beginning of this year. The artist, like many people, is convinced that the magnitude of the fires—their high temperatures, speed of transmission and alarming suffocating smoke—was the direct result of climate change, our planet's eco-environmental collapse.

Here in Auckland we all remember the dirty orange-yellow smoke that clouded our skies last January from the devastating Australian bushfires, and wonder if global warming contributed to their freakish length and ferocity. This Alicia Frankovich presentation in the North Atrium—with six performers in a huge, yellow, transparent, acrylic box, miming actions to do with firefighters and fire victims (human and animal)—clearly takes the position that it did. That alarm seems to be the driving motive behind the project.

As a complicated, multi-participant work with very specific references to Australian news items, AQI2020 will surprise most, even though Frankovich is well known to lovers of performance art in Auckland. She is currently based in Melbourne, and due to Covid restrictions, remains there, supervising this work long-distance digitally and through the help of curator Natasha Conland, and the dancer/artist Zahra Killeen-Chance.

The work’s title references the extreme smoke pollution indicators for the Air Quality Index at the beginning of this year. The artist, like many people, is convinced that the magnitude of the fires—their high temperatures, speed of transmission and alarming suffocating smoke—was the direct result of climate change, our planet’s eco-environmental collapse.

The many performative actions (sometimes solo movements, sometimes co-ordinated in pairs)—mostly sequenced in a 50 minute cycle—are surprisingly diverse. These seem to include: beating out fiery embers; aiming high pressure hoses; peering into windows of houses (with torches) to check there are no inhabitants; giving food and drink to victims; retreating from the flames into the sea (pulling people and animals into the rescue raft); shaking hands with publicity-seeking politicians; beseeching the sky to bring help and rain; swaying trees engulfed in flames; making fire-breaks; handcuffing possible arsonists; consoling the distressed; coiling hoses and tying ropes together; and using cell phones to attract assistence.

Other activities seem self-reflexive and about art processes, as if attempting to mock the performance viewer by holding dark rectangular mats against the glass to obstruct their voyeuristic vision. Frankovich here appears to be reprimanding the very beholders she is also committed to attracting. Maybe she is worried about social media and its possible interaction with this project.

AQI2020 is not lively all the time. Often there are ‘dead’ periods where not a lot seems to be happening. When it is, many of the mimed actions are impenetrable, where you can’t figure out what is being refereed to, even though articles and images from social media (some examples of which are temporarily stuck on the yellow acrylic walls) have apparently inspired all of them.

On the floor around the performers are various props such as an inflatable raft with oars, smoke machine, collapsible chairs, articles of clothing, towels and chilly bins. These seem to be there to suggest narratives of interpretation that thwart any sense of dance / actions that might be bound to formalist autonomy. Beauty doesn’t come into the equation. It is more about encouraging urgent political change and global awareness.

One interesting question generated here is do performance art, dance and mime overlap—if at all? Although there is a rumbling electric guitar dominated soundtrack, and a lot of simultaneous activities on the part of moving performers, it doesn’t feel like dance (with persistently repeated rhythms, uncluttered stage, or costumes)-at least not like say, Bausch, Rainer, or Monk-but is more like Marcel Marceau. (Or in-between: Lindsay Kemp.) Not so much theatre but stylised coding that you are meant to decipher. As an ensemble project, it is very different in feel from say, Frankovich’s 2009 gymnastics/abseiling-inspired work, A Plane for Behavers, at Artspace.

However, ‘liveness’ is not the salient feature here that generates excitement (maybe that is because Frankovich herself—who has charisma—is physically absent), or even intense emotion, nor fearful anticipation of the planet’s future. After all performance as an art genre is no longer radical, and the urgency of the current global disaster is now regularly stated in the mainstream media. It is not new news.

What is more apparent then is that sign systems rule, for the artifice of the mimetic coding is obvious. It’s rebus-like (or charadesque) quality though could be seen as heavy-handed—too didactic with its disaster-narrative denotations (and planet-conscious, community-desired, connotations). At times there is awkwardness. As is typical of much current contemporary practice, the ‘acting out’ communication processes within AQI2020 are emphasised, optimistically anticipating viewer recognition of performers’ body gestures and movements with the aim of generating further, more dynamic, political action.