Peopleless Spaces; In Forum about Meaning 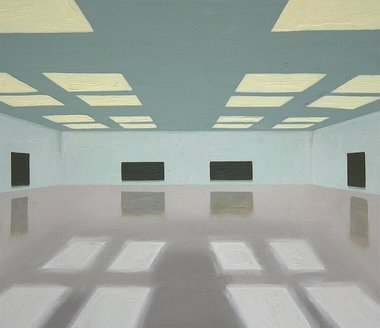 Boyce is not doing any clowning at all in this show, unlike other years. These works are not rebuses of irony, smirking at the hypocrisies of the artworld, or maybe his own. They are melancholic, and so, unusual that way. In fact they are (despite Neate's claim) very meaningful.

What are we looking at here, in this Arena? Are these Roger Boyce paintings of paintings on gallery walls about the sociology of the artworld, its activity as a ‘cult’—like the diagrammatic works of Peter Tyndall (‘a person looks at a work of art...’) But we see no people. Only spaces with art in them.

Just empty spaces with reflecting, polished concrete floors, dark Rothkoesque colour-field paintings (but landscape format) in huge pale rooms. Often mucking around with Albertian perspective. Deep recession and rows of regularly spaced windows on long walls. A bit like the photogaphs of James Casebere in that they seem fixated on architectural space and the impact of incoming light within it.

They also have nice chromatic control; very restrained colour for Boyce that is not typical at all. Here he is avoiding garish saturation. They have a softness that pervades.

There is a catalogue that accompanies this show and in its essay Robin Neate argues that these works have no meaning (1), a view sympathetic to Susan Sontag’s famous essay Against Interpretation. The works are meant to be about ‘looking’, implying looking does not involve some form of ‘translation’ of perceptual data.

Of course by publishing an essay at all—to say the works have no meaning—is contradictory. Neate is providing a meaning, one I don’t happen to be convinced by.

With the lack of depicted audience (unlike say, the photos of Thomas Struth), I think these works are more likely to be a comment on the effects of lockdown and COVID crisis on the artworld. The lack of human presence screams at you. They have a particular context in 2020.

Boyce is not doing any clowning at all in this show, unlike other years. These works are not rebuses of irony, smirking at the hypocrisies of the artworld, or maybe his own. They are melancholic, and so, unusual that way. In fact they are (despite Neate’s claim) very meaningful.

They are also surprisingly elegant. Often Boyce’s paintings are deliberately ugly and in bad political taste (in terms of gender or identity politics). He seemed to be trying to provoke. That is not present in this show. They have a gentleness—lacking optical harshness or any sense of ideational confrontation. Maybe Neate is doing the confrontation for him.

(1) ‘…I know how much Roger Boyce dislikes meaning…The search for meaning clouds the looking. The desire for meaning can not only hamper viewing but also making. I would suggest, if an artist’s singular intention is for the work to be meaningful, it will never reach the studio door.’