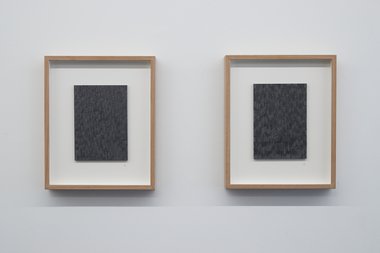 I'm not sure Herber, with these masking tape creations, can provide such metaphysical help and nourishment in our hour of need. However, aesthetically, they are a joy to behold. What makes the work especially satisfying in this respect is the choice of humble materials employed, and an application which (albeit it delicately) is simply executed.

What is it about the grid in art practice that brings out effusions of mystical murmurings and numinous pronouncements? It began with Mondrian, that earnest theosophical devotee who had swapped millennialist zealotry for urgent spiritual proclivities of a more evolutionist kind, wanting along the way to turn art into a religion. It was the early twentieth century, of course, with its nostalgia for the universal and hope for the arrival, if not the kingdom, of God—at least the coming of the “new man”. They were heady times.

The torch was picked up by others and carried into the middle of the twentieth century by artists like Mark Rothko, himself a bit of a gridist, reading into his moody rectangles a whole range of existential dramas.

Here in New Zealand we’ve experienced a touch of the transcendent with McCahon’s gridded Six Days in Canterbury and Nelson, plonking the narrative of Genesis inside south island environs and Shane Cotton doing the same with Te Timatanga: From Eden to Ohaeawai.

But mostly, in this secular state—amongst people of a pragmatic nature—we’ve been served up, via the grid, more earthy, profane and nonspiritual fare. One only need to look at the works of Richard Killeen, Ian Scott, Rosalie Gascoigne, Milan Mrkusich and Allen Maddox, among others to recognize that.

So it might come as a surprise (or not) that the grid works of Veronica Herber, currently on show at Laree Payne Gallery, Hamilton, have been touted as redolent with mystical musings. Indeed, the process involved in their creation has been described as a kind of intuitive Zen-like methodology. Phew.

What’s happened? Are people looking, during these troubled times, for some kind of spiritual sustenance from art, some measure of meditative, numinous and restorative therapy from artistic visual experience? I’m not sure Herber, with these masking tape creations, can provide such metaphysical help and nourishment in our hour of need. However, aesthetically, they are a joy to behold. What makes the work especially satisfying in this respect is the choice of humble materials employed, and an application which (albeit it delicately) is simply executed.

Her signature materials are Washi tape and graphite powder. Normally we associate masking tape with a disposable function that in art practice helps with definition in the painting process. Herber has inverted the custom and taken the throwaway item as her primary mark maker. The methodology here is precise, exacting and inventive: the tearing of the tape into the required shape and size; and where a hard edge is needed, the sharp rim of the tape itself is used. Economy of means is thus the wonder inherent in the creative process. To produce such beauty via such a minimal means (black on white) just adds to the sheer pleasure of looking.

The creations themselves display an engaging variety of forms within the grid pattern format, from dense and overlapping, strict linear and regimented, to more random and irregular arrangements. Seeds been Sown is an example of the latter where subtle vertical spacing, indicated by a series of fine gaps, gives structure to an otherwise slightly unsystematic configuration.

The largest piece, The Whispering, is a tour de force, involving delicate shading to create a 3D effect. It possesses an ethereal quality, both refined and tantalising.

There are real imaginative and innovative variations in format here that count against what could quite easily have descended into a repetitive recycling of similar design plans.

That the clever and elegant manipulation of this otherwise ephemeral material adds up to something like the exploration of the forces of life and death—or acts as the basis for the jewels of mystical experience—is probably an extravagant call, but the artist with her impeccable control and exploitation of the medium has delivered some gems that are certainly on a par with an artist like Bridget Riley.

These exquisite delights are well worth the trouble of visiting. The curious viewer is generously rewarded.