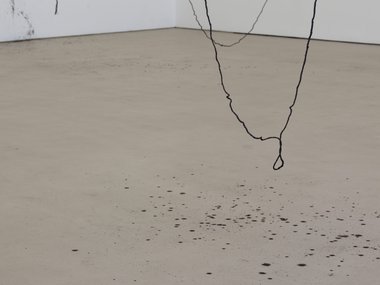 Isabella Loudon‘s practice is a dynamic synthesis of late sixties ‘mimimalist’ icons such as Hesse (a big presence), Serra, Morris, Le Va and McCracken, but transmuted through a use of dark ‘ossifying’ concrete that with various flexible linear materials becomes a sort of joke about ‘calcifying’ historical process and stylistic resurrection.

Scattered throughout Trish Clark’s wonderful sequence of rooms, what is normally a reversible making process is shown to become frozen and fixed, not dismantlable or fluid. What was once light, portable and airy becomes rigid, heavy and solid. Traditional substance and texture-celebratory sculpture here reasserts itself—usually blending with the ‘accidental’ airborne marks of (say) Robert Motherwell-esque painting, or Richard Serra’s lead ‘splash’ process—so that the work looks dramatically heavier than what it is.

This is partly because of the imposing pigmented tone; usually dark grey, charcoal, or umber, but on one occasion (Shift) a surprisingly warm burnt umber.

Loudon’s twelve works are often made in situ, particularly one suspended linear work (Fragmentation) that is to be encountered in several spatially separated parts. Binder-twine that has been dipped in coloured concrete and hung from nails leaves multiple drips, splats, splashed flecks and dribbles on all adjacent, upper and lower planes. On one site these marks themselves (with two nails) solely become the sculpture. The solid, more palpable, ‘sculpture’ has been removed.

Other wall works (Extraction, Spider) emphasise the containing frame and the descending spilling power of gravity. On the floor, two vaguely cube-shaped sculptures of jammed-in, folded set twine (Nonsense, Dense) hint at the five restraining box-sides that are now absent, and the open ‘top’ (now turned on its side) where the longer ‘liberated’ squeezed loops have an elongated exuberance.

For all her use of cement, the artist’s conspicuous inventiveness and multiple allusions contradict this material’s blanket implications of rigidity as trope. Her activities conceptually defy that metaphorical suggestion.

One gravity-based work, Morph, is very different from the others. It seems to be made from the thin rubber of a tractor tyre inner tube. (And is related to works she showed with Robert Heald in 2019.) A series of linked double-ended hooks attached to the ceiling suspend this wobbly sliced form as if it were a carcass of meat about to be divided up by butchers. Curvaceous, smooth and shiny, it is a black fetish object very different from the perpendicular items made using granular cement. It is surprisingly sinister, referencing possibly a half-clothed, slashed, human cadaver.

This work is thus quite creepy, and not slyly humorous like much of the exhibition; but violent in its overtones. Ominous in mood, it indicates that Loudon has many unanticipated strings to her bow. Clearly a confident major emerging talent—she graduated from Massey in 2016 and has been in several major institutional group shows—she effortlessly keeps her audiences spellbound and guessing.