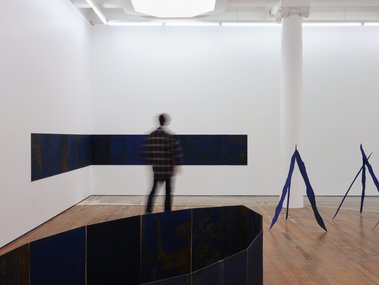 This pairing of Banks Peninsula installation pioneer, Pauline Rhodes, and Berlin-based film-maker and sculptor, Richard Frater, is obvious because both artists love—and are highly protective of—nature (such as the sea and its beaches) and both are committed to taking photographs and making sculpture.

With a title taken from Maggie Nelson’s famous book of short prose ruminations on a certain hue, this pairing of Banks Peninsula installation pioneer, Pauline Rhodes, and Berlin-based film-maker and sculptor, Richard Frater, is obvious because both artists love—and are highly protective of—nature (such as the sea and its beaches) and both are committed to taking photographs and making sculpture. And Rhodes in particular likes to use deeply dark, saturated blues. (Note she appreciates hot reds and yellows as well.)

Rhodes usually creates in situ installations that react vitally with the spaces that enclose them. They are not discrete objects that are in suspension, or oblivious of, the surrounding architecture—even if the colour is ferociously intense. They speak to the building and room that contains them, particularly the planar extensions of height, length and breadth. And the textures of those planes.

In selected nooks and crannies (and main space) of Michael Lett‘s labyrinthine gallery Rhodes has carefully positioned her spatially isolated sculptures, most having a temporary physical existence, and likely to be reconfigured (or recombined with other elements) in future projects.

Two works use iron-oxide stained and painted ply, cut into undulating linear water forms that propped up as tripods (resting on stained fabric) make skeletal mountains that reach up to the ceiling. Another is a dark ominous horizontal slot placed on the two walls of a corner of the main street-level gallery. Another still is a boat or eye shape made of hinged squares of plywood, resting as a container on the floor. One other sculpture is a pile of skeins of wool (linked as if flowing like a spiralling river) lying in a basement corner, dyed a super-intense blue. All five works have an assertive commanding presence through the way they lock into the architecture.

Frater‘s four black and white photographs are initially baffling. They are of birds (two wood pigeons, a greenfinch, and an ibis) that have have separately flown into sheets of glass in the windows of art galleries in Berlin and Melbourne, their bodies leaving imprints on the glass.

Seeming taken by security cameras (I’m guessing here—Frater may have visited the galleries and made documentation directly) and enlarged, in these specked grainy images the stunned or killed avians seem to be exploding, dust, feathers and grease flying in all directions. The high-speed impact has made them shapeless. They are records of tragic events where even art institutions have unwittingly contributed to their senseless deaths.

The last bird photographs Frater showed at Lett’s were of goshawks nesting in a Berlin park, disturbing because of wild creatures being pressured into moving into a city environs. These new images are more sinister and less subtle. The violence is in your face; the art community and its architecture stridently implicated.