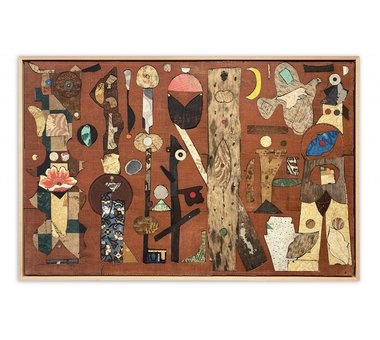 Ogden's sumptuous (from a distance—for they avoid being immaculate) compositions accentuate the vertical and rigid, exuding a formality and creating a vaguely hieroglyphic ambience that hints also of tapestry with its medieval luxuriance: due to the glowing colours and density of elements.

In these carefully crafted collages of recycled floor lino, blended with some paint, gold or copper leaf, hessian and wood, and a base of ply, Christchurch artist Simon Ogden presents the silhouettes of birds, moths, moon, leaves, trees, cacti, fruit, flowers, houses and infants, all ‘inlaid’ with decorative patterns and textures. Unlike in, say, Magritte, the contained space does not perspectivally recede, for the works’ edges and picture-plane are never forgotten.

Ogden’s sumptuous (from a distance—for they avoid being immaculate) compositions accentuate the vertical and rigid, exuding a formality and creating a vaguely hieroglyphic ambience that hints also of tapestry with its medieval luxuriance: due to the glowing colours and density of elements.

With their tightly inserted pieces—but not too perfect (they have a calculated ‘controlled’ rawness, like work by some Australian artists like Tom Risley)—they have a worn rough quality that gives them the patina of age. Because they are made with stencils and the lino is abundant in ornamentation, they avoid fluidity or looseness, and have a deliberate stiffness. The motif shapes are repeatable and reversable—and never overlap. All spaces are energised. They are never empty.

There is a range of work size and shape here. Some vertically rectangular collages are about the size of table mats and so seem a bit twee, too tailored for a domestic environs. The larger horizontal ones have more muscle but because the presentation is overcrowded and they are shown in a row, they blend to look like a continuous frieze; and are overproduced.

Moving around the exhibiting space, alternating your viewing between the tactility of close proximity and the pageantry of several feet distant, you become aware of how the mood of these decorative collages can quickly change according to your position. Your visual understanding alters quickly.

With the many depictions of doves, trees and fruit there is an Edenic ambience that seemingly is not intentionally site specific in this Auckland suburb. What is interesting instead are their ornamental medieval tapestry connections, especially the density of motif. With their richness of jostling juxtaposed shape, this fourteenth century princely Gothic reference is very much apparent.