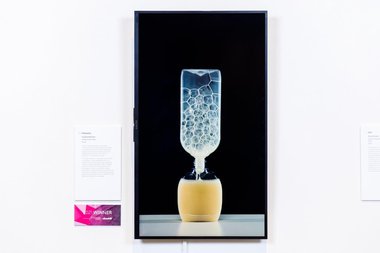 I think it was McCahon who said that all the finest art had at its core the confrontation with mortality. Boreham does that here with a clever economy of means. As the hand wash slowly leaks out of its bottle it becomes transformed, by the artist, into a memento mori work, reminding the viewer of their own transience. The imaginative reuse of the apparatus is also what makes this piece so apt. The sheer banality of it. Conceptual art at its best.

Covid, hand wash and contemporary art. Which of these three go together? Well, all of them if you are visiting the National Contemporary Art Award, currently showing at the Waikato Museum, curated and judged by Karl Chitham, director of The Dowse Art Museum.

Their commonality consists in the winner of the $20,000 prize, a video work by Caryline Boreham, entitled Palmolive. What is presented here is a large upturned bottle of hand wash gradually disgorging its contents into another bottle—till one is full; the other empty. Simple. That’s all that happens.

The significance of this is in the context. It’s personal. And it’s beyond personal. It directly references the current pandemic that has already claimed five million lives worldwide and counting. But this hourglass construction possesses also private allusions in that it makes a direct reference to the artist’s father whose life gradually ebbed away recently. Thus the work operates at both an individual and universal level, which all the best art does.

I think it was McCahon who said that all the finest art had at its core the confrontation with mortality. Boreham does that here with a clever economy of means. As the hand wash slowly leaks out of its bottle it becomes transformed, by the artist, into a memento mori work, reminding the viewer of their own transience. The imaginative reuse of the apparatus is also what makes this piece so apt. The sheer banality of it. Conceptual art at its best. The ordinary becomes elevated to declare, unexpectedly and sometimes shockingly, truths about the human condition. A deserved winner.

By contrast, the runner up is politically charged. Brett a’Court’s Rua Kēnana and Pinepine Te Rika’s descent from Mt. Maungapōhatu, calls on New Zealand’s troubled past, a theme well-trodden in this country as we reflect and come to terms with parts of our inglorious history.

The episode alluded to in this work involves the Māori prophet, Rua Kēnana that played out tragically at the beginning of the twentieth century in a context fraught with World War One paranoia. What presented as a Moses-like liberation of people and establishment of the kingdom of heaven on earth on the slopes of the mountain, turned into a kind of ‘massacre’ of the innocents. The outsider, albeit with his own delusions, was cruelly disenfranchised.

Some of this is evoked in a very small and modest painting, the artist choosing a symbolic blanket as his canvas. Depicted are the couple, wide-eyed and wondering after encountering the ‘divine’ revelation. The painterly work demonstrates some delicate and deft touches, held together with structural use of bold black line. Rua’s wife, pressing apprehensively into the side of her husband, helps convey all the narrative drama of a biblical encounter.

More politics on the back of COP comes in the form of a two channel video by Denise Batchelor, entitled Nexus. Planetary matters are invoked with a plea to heed the voice of the earth, as the “sky cries enough tears to fill an ocean”. Images of rain fall in the top half of the screen while flood waters envelop the lower. One does sometimes wonder whether these political pieces are so much wasted ‘paint’. Ironically, the artist herself seems to concur, expressing her own despair in her text where she comments that “the messages go unread”. If the evidence of the earth itself is not enough then what chance the artist? So much pissing into the wind.

What about something political which is not quite political? D Milton Browne has apprehended such a thing in Gaze, with an image of our PM, Jacinda Ardern, capturing her in an unguarded spontaneous moment, head thrown back in sheer delight at some a joke or incident, all teeth and smiling, arms rigid with a kind of childlike glee. We view this almost voyeuristically, given the subject and the context that surrounds who she is. Is this politics made personal, made into something with all the pomp, the formality, the degree of distance sucked out of it? Documentary and opportunist photography come together here at its best.

Politics of yet another different kind is traversed in Brit Bunkley’s video piece, The Killing Chain. We are provided with paned and aerial views of the overgrown ruins of what was once a freezing works. This ultra-unromantic setting becomes—via the machinations of time, and the collapse of what was once a New Zealand primary industry—a picture, ironically looked at nostalgically, courtesy of the treatment the artist gives it. We don’t have ruined castles to evoke a romantic bygone past in this country, but here Bunkley, with a touch of the paradoxical, gives us a ‘brutal’ equivalent. Bush clad chunks of concrete, an abattoir, take on the role of the quixotic and dreamy days-of-yore-a commentary itself on the nature of the New Zealand psyche.

Again the political percolates beneath another work, this time a sculptural piece by Oliver Cain, a ceramic that has echoes of Duchamp’s Fountain. That particular work had strident political overtones (anti art / anti war) and Cain’s Fruit Bowl, playfully engages in a social war—the politics of sex and gender in its reference to the ‘fraught world’ of the male homosexual. A urinal stuffed with ceramic bananas says it all and says it rather cheerfully and somewhat sardonically.

Thus far the artists selected for scrutiny have held up a mirror in which we can gaze and see ourselves reflected back. Sometimes it is not always a pretty sight and Mark Purdom adds to the disquiet in his photo, Late Model Mazda. Late, as in, deceased.

Here the underbelly of the New Zealand male subculture is exposed to reveal its destructive and violent proclivities. No conserving, save the planet, think of the environment, going on here. This is boy racer territory, with all its mindless yahoo appetites blatantly on display in a burnt-out car discarded next to a burgeoning field of maze or wheat. The juxtaposition is both poignant and apt, all presented, pertinently, beneath a bright blue cloudless sky.

An example of the non-political stuff on show is Kyle Sattler’s piece, which does Len Lye on steroids. Various abstract shapes morph and change at speed on his multi monitor video work, creating a visual feast of expressionist marks and forms that dance, mutate and pirouette in front of us. But the artist obviously deemed such playfulness not sufficient in itself and felt compelled to load and layer it with deep, dire and meaningful pronouncements that are reflected in the title: Has It Ever Been More Tense Than Now: The Post Covid Apocalypse. Completely unrequired.

No such imperatives operate in the work of Mark Soltero, who simulates something like a Rorschach test on a very large canvas, and then tells us it is based on the shadows cast by one of those old movie seats from cinemas of a bygone era. From a distance it looks like a butterfly, or perhaps a lattice wrought iron gateway, leading one into some celestial abode. All to do with memory, perception and history.

A similar shift that begins with the banal and seeks transcendence is found in the work of Ruth Cleland. Her graphite on board contribution, Concrete 2, replicates the surface of a concrete slab with meticulous precision, as if in search of concealed meaning which only the closest and most scrupulous scrutiny will reveal.

This discussion represents just a small taste of works, political and non-political, that vie for attention in this award exhibition, which sees 38 of Aotearoa New Zealand’s best and brightest practitioners display their wares for the discerning viewer. Because of Covid interruptions, the show will have an extended season into the New Year. For those visiting the region, conditions permitting, it is well worth a look.