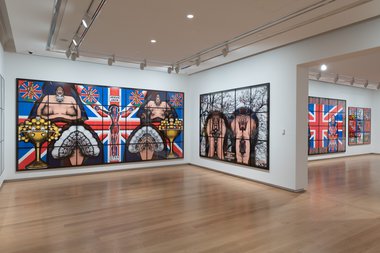 For those of us who used to see their images occasionally in the 80s when the rare British show came to the National Gallery in Wellington, or when British art stars regularly contributed to the Biennale in Sydney, this exhibition is fascinating because of the changes in Gilbert & George’s practice. Now the huge dynamic images are less heraldic in composition, with less white background space, more pictorial layering, and much more found language.

In this complex exhibition devoted (amongst other things) to the individual’s right for physical and mental freedom—using visual pleasure, sly wit and bombarding language—Gilbert & George in the Tāmaki Makaurau city gallery, set up six groups of large photomontages to get their Kiwi audiences thinking: firstly about the artists’ (often conservative) take on the urban Britain that surrounds them; and then, by implication, parallels in modern Aotearoa New Zealand. All in this their first ever survey of twenty-first century works. (Three earlier decades are ignored-though not in the catalogue.)

A few items seem extravagantly provocative; some are disturbing, others contemplative. However all are emotional, and generated by curiosity about the world. It is difficult not to respond mentally and bodily in some way to the strident subject-matter, large scale, insistent grids, pithy language and saturated colour. With this brilliant presentation of 61 photomontages that ostensibly are about life in East London but which can be extended much wider, you leave the gallery rattled. And even though the work is selected from a corpus that is over two decades, it feels very contemporary and layered in its interpretative (often contradictory) possibilities. Much is squalid and depressing; such is the current moment. Most are very England-specific in their scathing condemnations; most are also universal within the contemporary western world.

The subject matter is wide ranging in its arousal of feeling, some of it oscillating between sincerity and irony. You have to decide whether they are kidding or not, by looking for clues. The list includes bureaucratic control, drugs, homosexuality, fear, Christianity, monsterism, private property, greed, Islam, coins, racism, sport medallions, youth, prostitution, colonialism, aging, the homeless, patriotism, urban detritus, class, right and left-wing fascism, surveillance, the Queen, and the tabloid press. And more.

Their show is extremely interesting if you enjoy pondering imagery that has multiple levels of meaning, sifting through it for indications of intent, maybe ignoring those and seeing how unanticipated components play off against each other with a slippery ambiguity. Here are eight examples that are loaded with clashing modes of understanding that you have to wrestle with: to ponder issues of possible irony, advocacy, or condemnation. Are the suggestions below wildly nutty, or are they feasible? Are Gilbert & George responsible citizens or are they provocateurs who are in fact dangerous (which some people may think)? How do we decide?

In BRITISHISM, 2008 we see a set of masticating teeth chomping up rows of people, the top row Gilbert, blue and laughing; the bottom row George, red and tearful. The fearsome chewing mouth can also be interpreted as two crowns, one stacked above the other. The Royal family destroying the British public…perhaps.

In UNION DANCE, 2008, the way Gilbert & George present their mouths and hands is interesting. Are they hamming it up and pulling faces? Or jeering? Or are they whistling like shepherds, signalling to their audience like sheepdogs, or slyly sending political signals to ‘patriotic’ extremists like Empire Loyalists? In other words, dog whistling in the devious sense.

WE’RE ALL BASTARDS, 2014 is ostensibly about the hygiene of men’s public toilets. Whose job is it to clean them? Should women be prevented from such work as their presence might embarrass the customers? Is there a hint that the Royals should have a go at it? The yellow cipher of Edward VIII dominates.

AIRDROP, 2013 features nitrous oxide bombs. Like other drug references in the show they obliquely connect to the 1972 performance work GORDON’S MAKES US DRUNK. The images are not judgemental. Instead they seem empathetic to chemical escapism, and are matter-of-fact about its appeal for youth.

PUTTEES, 2013 presents unravelling bandage-like buttoned articles of colonial military clothing around the artists’ bodies, to create fabric skeletons and also bodily restraints. They hover around a burqa clad woman doing her shopping. They represent the old traditional ‘Britishness’—now defleshed and becoming unclothed—acquiescing to the new.

CARRY ON, 2008, made me laugh out loud when I saw it. It shows a carved Jesus carrying his cross and refers to the aphorism ‘Keep calm and carry on.’ That advice was stated on a 1939 poster put out by the British Government’s Ministry of Information during the war. Gilbert & George have recycled it with irony, seemingly attacking the passivity of the class system as perpetuated by Christianity, and the latter’s oppressive eddicts.

EUPHORIA, 2013, is also full of surprises. It shows a homeless friend, George Crompton, standing in front of a limousine. He is dressed in a onesie and cloak, and he looks like a very distraught judge dressed in a gown and wig. It is a particularly disturbing picture.

Gilbert & George‘s works are not arranged chronologically in the floorplan, but the six types (JACK FREAK PICTURES 2008; LONDON PICTURES 2011; SCAPEGOATING PICTURES 2013; UTOPIAN PICTURES 2014; BEARD PICTURES 2016; and NEW NORMAL PICTURES 2020) are presented for maximum visual impact in eight rooms and—instead of individual wall labels—there is an informative free brochure, one wall text outside the show’s entrance, and an excellent 20 minute video interviewing the artists while they are walking through the exhibition.

With the supplementary material you are encouraged to interpret the works yourself by close looking, and not passively following any ‘official’ explanation. To engage by examining cross-connections and internal emphases is richly rewarding.

The nine JACK FREAK PICTURES 2008 feature the Union Jack flag as a dominant motif accompanying the two ever-present artists. Sometimes it is chopped up and decoratively scattered, its angled vectors looking collectively like a screen that is vaguely Islamic in its rigorous and symmetrical geometry.

The twelve LONDON PICTURES 2011 focus on sensationalist fear-mongering billboards that London tabloid newspapers place outside the dairies and magazine vendors to promote sales. Each module of shrill attention-seeking language contains a highlighted repeated key word utilised in many different contexts.

The eleven SCAPEGOATING PICTURES 2013 present the artists in fragments, alongside subjects set up to falsely attract blame and acrimony, such as the previously mentioned nitrous oxide (‘laughing gas’, ‘hippy crack’, or ‘sweet air’) with its metal cannisters (‘bombs’) frequently littering the streets, or Muslim women out shopping.

The fourteen BEARD PICTURES 2016, besides commenting on the passing of time and the (actually clean-shaven) artists’ aging, inventively incorporate a wide range of unexpected texture-varied materials (such as leaves, wire mesh, barbed wire, reinforcing rods, zips, and even a demolished house) to humorously depict beards and ironically indicate the wisdom of Methuselah.

The eight NEW NORMAL PICTURES 2020 are comparatively recent. They dwell on the devastating effects of COVID as well as the general rubbish, prostitution and drug using that is regularly seen now in East London, outside the doors of their 18th century Spitalfields home.

For those of us who used to see their images occasionally in the 80s when the rare British show came to the National Gallery in Wellington, or when British art stars regularly contributed to the Biennale in Sydney, this exhibition is fascinating because of the changes in Gilbert & George‘s practice. Now the huge dynamic images are less heraldic in composition, with less white background space, more pictorial layering, and much more found language.

The softcover book that is available with the show is a bargain, with lots of spectacular images of installations to show you pre-2000 photomontages and so provide a lot of context for this show. There is also a couple of poetic manifestos, and large photographs of the Auckland works. Michael Bracewell’s accompanying texts are particularly rich in their exposition of the different image categories-and discussion of Gilbert & George‘s Fournier St environment where they go for daily walks and take research photographs—and Kirsten Lacey (the Gallery director) writes an unusually long but informative introduction.

You are encouraged to assess Lacey and Bracewell’s comments when you stand in front of these very intelligently constructed pictures; and to ponder the artists’ explanations too. To see if they match the juxtaposed exhibited images, and fit any ordering logic you detect that they might carry within. Those authors might be accused of over-determining meaning (as art writers often do), but whatever they say, you can confirm or contradict it (or what I say) yourself. Such is the exhilarating freedom of art—and the zigzagging stratified thought it here nurtures.