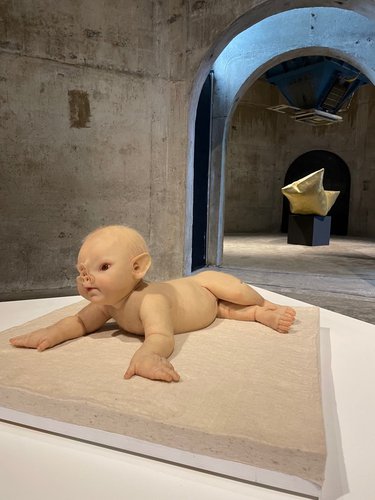 The motivation for the show's genesis for the present era is complex; sparked by the shrill toxicity of cancel culture, the blanket undiscerning condemnations (at times) of the Me Too movement, the tragic overturning of Roe vs Wade, and the disappearance of democratic debate in art and other sectors.

Inspired by the ghastly stories of the post-reformation Scottish witch hunts in the sixteenth and seventeenth centuries—as referenced by William Ash Mills in The Black Book of Isobel Gowdie: and Other Scottish Spells and Charms, and the requiem The Confession of Isobel Gowdie by composer James MacMillan—Scottish gallerist Scott Lawrie has assembled works of six varied artists to fit in the dramatic concrete cylindrical setting of Silo 6 in the Viaduct, down in the Wynyard Quarter.

With five he has commissioned new art, and for the sixth he has borrowed from a collector. For the context of this show they are presented deliberately un-named. With Lawrie’s own introduction, there are also excellent essays from Andrew Paul Wood and Tamar Torrance to provide background.

The motivation for the show’s genesis for the present era is complex; sparked by the shrill toxicity of cancel culture, the blanket undiscerning condemnations (at times) of the Me Too movement, the tragic overturning of Roe vs Wade, and the disappearance of democratic debate in art and other sectors.

Whatever one’s views, and you may not identify with the above sentiments, this unusual exhibition brings together two painters, two sculptors, a filmmaker and an installation artist in an effort to see what can be learned from this grim period of Scottish history that is relevant for today. And if nothing can be learned, what does the art offer us anyway?

Rebecca Hazard’s carefully rendered meat paintings get more beautiful each time you examine them. There are three loose canvases. The autopsy-like images are strangely like a dessert with occasional splashes of custard and cream, for disturbingly, you almost ignore the bloody severed flesh with its marbled fat and sinews. Cleverly confusing, as well as creepy, they delight in the optical pleasures of flesh torn apart.

Patricia Piccinini’s monstrous silicone and fibreglass baby has a bat’s nose and ears, plus a dog’s paws and hind legs, seemingly the result of copulation with Beelzebub who is always changing animal bodies. The work links desire with terror, fantasy with horror, lust merged with dread. It has human hair added, that can create involuntary shudders.

Rebecca Wallis’ five tall stretchers, with dense cascading streams of white dribbles (overtones of Hammond, early Morison paintings, and Darragh posters) have a weird coital carnality alluding to Freud, and with a mirroring glass sheet on the floor, to Lacan—deftly connecting the symbols to men methodically oppressing women. Like unravelling weavings, they can be interpreted formally, processually, and politically.

And finally, Monique Lacey’s long golden bent pillow hints of sleepless nights; male guilt that can’t be eradicated by sweet slumber—a legacy of persecution that won’t go away to be forgotten. The sculpture is hard while it looks soft (though built originally around a cardboard box) and paradoxically can be seen as a thwarted phallic symbol, and also as a doorstop to prevent draughts—‘nasty’ inconvenient zephyrs from the past or present that might disturb.

There are lots of highly ambiguous works here that you can mentally grapple with in a grim but architecturally thrilling setting. Mostly no easy narrative works dominate, only slippery symbols petaining to climates of fear and repression—hopefully never to be repeated.