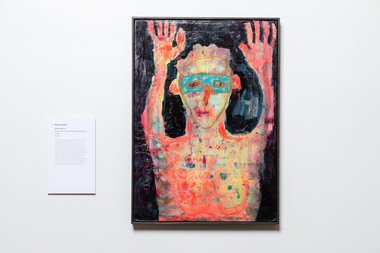 The winner on the night was a figurative painting entitled, 'Red Handed', by Emma Hercus, a collaged creation depicting a figure, male, masked (like a bandit), hands raised in the air. The judge, Reuben Paterson, was enamoured with the process involved in the making of the piece. The artist had begun first with strips of paint soaked fabric laid down on the MDF board and from these random markings and imprints, there gradually emerged the shape and form of a figure.

There is a work in the 2022 NCAA at the Waikato Museum that is both startling and arresting in its delivery. It comes with a wonderful title—An Abominable Mystery—and it is only when one approaches the work from a few feet away, that the mystery is partially solved. And that is part of the strategy.

This photographic print, the work of Virginia Were, is a large image of beautiful blue flowers, clustered and crowded across and beneath an extended concrete slab. The beauty of the hydrangeas is particularly startling because of their juxtaposition with the unadorned brutalist concrete block. It is only when one approaches the work, close up, that the revelation is made plain. These are not hydrangeas at all but hundreds of discarded blue rubber gloves.

The shock is palpable and ‘abominable’ is just the right word. The artist has made the ambiguity of this work all the more ironic and poignant by having borrowed the phrase “abominable mystery”, from Charles Darwin who used it to describe his puzzlement with regard to how the first flowering plants evolved. The artist makes the point in her text that future generations will be equally disturbed and puzzled when they discover these ‘flowers’ embedded in the fossil record.

This is art at its best. No commentary is needed to explain what is going on here. It makes its observation acutely and tellingly without too much fuss. Just the right amount of cropping is employed in the photograph which speaks directly and forcefully to our present planetary dilemma.

It won neither the top award nor any merit prize.

Another work that received no accolade, one that impressed this reviewer, was a conceptual piece by James R Ford. What it amounted to was a simple text, painted (acrylic) on canvas so precisely that one could have easily mistaken it for being mechanically printed.

Eight words in total were involved, a simple statement that basically sums up the existential quandary that is part of the ordinary human condition. Not enough of this kind of work is being done by artists today, preoccupied as they seem to be with social and political issues. A pity.

Thus when one sees works like this, it comes as a nice, refreshing surprise. The text, “It’s all a bit confusing, then it’s over”, addresses the ultimate predicament — life and death with all its bewildering aspects writ large, especially in the present age. In its presentation, understated, minimalist, sharp edged, black on white, this simple, unadorned work, stands out from the rest with its affecting sentence.

The winner on the night was a figurative painting entitled, Red Handed, by Emma Hercus, a collaged creation depicting a figure, male, masked (like a bandit), hands raised in the air.

The judge, Reuben Paterson, was enamoured with the process involved in the making of the piece. The artist had begun first with strips of paint soaked fabric laid down on the MDF board and from these random markings and imprints, there gradually emerged the shape and form of a figure.

Paterson made an analogous reference to the Turin Shroud in his explanation of the development involved in the creation of the piece. Curiously, he interpreted the image, not as someone guilty, hands raised in the air caught red handed, as the title implies, but rather as some masked hero, hands extended aloft in triumphant celebration.

It was a triumph for Hercus who went home $20,000 richer, thanks to the generous sponsors—Chowhill (architects) and Tompkins Wake (lawyers). The work itself reminded one of all those ubiquitous figures that crowd the canvases of Ewan McDougall; simplified beings, arms often raised in the air, making mayhem with smiles on their faces.

There are a large number of works selected for the show that allude to landscape. The best of these includes There Were Trees, by Elliot Collins. This piece is constructed in the form of a thin Perspex box filled with honey, inside which is suspended a small bone, symbolic of the remains of a tree and by extension, forest, felled and burned down by the inhabitants of the land. AWA is another that also involves memory, a small atmospheric painting by Merthyr Ruxton which depicts a river from her childhood, one the artist swam in, evoked with a moody palate to capture the joy of the remembered experience.

Black Milk, a large abstract triptych by Tira Walsh, plays off urban landscape against rural countryside, using subtle shades of black that are reminiscent of Ralph Hotere, while Memories of Nikau, another abstract, the work of Deborah Moss, uses a de Kooning-like style in order to celebrate the “abundance of nature”.

Scott McFarlane’s surreal conjunction of people and landscape in Figurative Real Estate, has a quirky originality, but it is Milvia Romici’s sculptural forms that particularly arrest the attention. Made from various plastic packaging and constructed to look like large rocks or boulders, these configurations, called Future Rocks, confront the viewer directly and dramatically about the dangers of plastic waste.

It is always instructive to visit national award exhibitions like this where one can get to gauge, to some degree, the state of play (art-wise) that presents a certain point in the nation’s history. Visitors will not be disappointed if they check out the works on show here.