We, the Artists … or, The Delivery 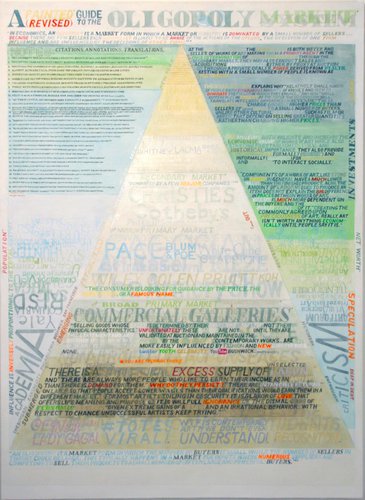 Given the current modelling scenarios (e.g., entrepreneurship, competitiveness, professionalism, communication, critique, branding, etc.) that contemporary artists are delivering in a neoliberal and globalized commodity/labour marketplace caution is required when running possible futures. Nevertheless, correlative to all the above remarks and mixed determinations the subjectivity/agency of the artist is changing, mutating. Today, who do the artists think they are? What are we, the artists, becoming?

Friday afternoon at the Aotearoa Art Fair, 2022 Edition. While the gallerists and their helpers are working the system downstairs, there’s a talk underway upstairs named precisely that, ‘Working the System.’ Three artists and a convenor ‘in conversation.’ Melanie Tangaere Baldwin, Dane Mitchell, Ruth Buchanan, and Zara Stanhope. Not that the artists are speaking as individuals. Rather, they’re here speaking on behalf of the organisations to which they belong. Hoea! Gallery, Equity for Artists, and Artspace Aotearoa.

Baldwin speaks of Hoea! Gallery as a wahine Māori run and ‘non-commercial’ project space with a fidelity to the promotion and exploration of contemporary indigenous art. Located in Tūranganui-a-Kiwa/Poverty Bay, the gallery has wairua connections to the whenua there and thus to the whakapapa of various hapu and iwi but is also developing connections with other indigenous artists and ARIs on a more planetary scale. Given that Hoea! Gallery is ‘non-commercial,’ Baldwin speaks of funding. Funding-as-problematic. Which means that she speaks of the gallery’s connection with Creative New Zealand. In other words, her korero is of the gallery’s financial relation with the iwi-state of Aotearoa/NZ. Whether this connection operates via CNZ’s ‘The Creative Communities Scheme,’ ‘Ngā toi ā Rohe, Arts in the Regions’ or some other arrangement is left unspoken, but clearly Baldwin finds the requirements of the connection challenging, if not to say 100% distracting and exhausting, and thus she suggests ways in which CNZ might alter the requirements: less numerical measure, less formal report-back, more future certainty, more faith and trust from CNZ’s side of things.

Mitchell speaks of Equity for Artists as an advocacy group ‘seeking’ amendments to the regulation and policing of the secondary or resale art market. Given this, the group’s sole approach to date has been to form a working relation with the iwi-state of Aotearoa/NZ, that is, with the Ministry of Culture and Heritage. Throughout his korero Mitchell refers to this relation as ‘having a seat at the table.’ If this comes across as somewhat immodest, for the most part Mitchell speaks as a realist. When recently the government announced that it intends to change the legislation concerning the resale art market so as to award a 2% commission back to artists/artists’ estates, Mitchell acknowledges that this was pretty much due to the requirements of various global trade agreements rather than any lobbying by Equity for Artists. And he accepts too that under the projected legislation most artists/artists’ estates will not benefit that much, if at all, in dollar terms. Ditto with more stringent Intellectual Property policing. Nevertheless, he speaks of his group’s desire to maintain its ‘seat at the table’ and so keep working with the Ministry of Culture and Heritage on future possibilities. At this point things get a little vague, but Mitchell briefly mentions an advisory role plus discussions around the idea of an artist wage. When asked by Stanhope about Equity for Artists‘ legal structure and constituency he gets even vaguer.

Unlike Baldwin and Mitchell, Buchanan doesn’t speak of money. Perhaps this is because Artspace Aotearoa is long established and has assured funding streams. Or perhaps it’s because she has only very recently taken up her role as Artspace‘s director. In any case, Buchanan begins her korero by reciting a poem. The words ‘revolution’ and ‘joy’ stand out and thus establish a utopia-tinged mood.* It is the habit of Artspace directors to speak of community, this often in the sense of an already existing community (e.g., the LGBTQIA+ community). Buchanan, however, speaks of her desire for a coming community, an arts community yet to-come nurtured by way of ‘partnerships’ and ‘joy.’ She notes the importance of Te Tiriti o Waitangi in this regard but speaks too of potential partnerships, ones with artists young and old, with unnamed groups and organisations. The word ‘revolution’ doesn’t make it beyond the initial poem recital.

While the talk delivered open and interesting accounts of how three different organisations are working the system, and this in quite specific areas—i.e., funding-as-problematic, $$-redistribution, the vision thing—nothing much was said regarding the system itself. No doubt time was a factor, and yes, examples are always a trusted place from which to begin. What follows then is an attempt at getting way more generic on it as concerns ‘the system.’

There are changing and mixed suggestions about how artworks are classified as such and thus about how an artwork’s value/price might be determined. Sometimes artworks are said to be varieties of infinite ornament: nomadic lines, swirling contrasts, plant and animal forces, a kind of vitalism. This is when the differences between art and nature seem to collapse. Sometimes artworks are deemed artworks because of some factor = x inherent to the artefact itself: beauty, sublimity, eeriness, cuteness, harmony, a new form, concept, or truth, etc. Sometimes it is said that the viewer’s frame of mind determines the presence/absence of these factors = x. Or that a community’s frame of mind, a collective awareness—perhaps even a ‘universal’ collective awareness—makes the determination. Sometimes no factor = x is required and thus anything can be art, in which case it’s an institutional/discursive framework which is said to determine an artwork as such. Today it seems more and more the case that the marketplace is determining artworks. As Lyotard once quipped, the only sublime aspect of contemporary art is the prices.

A can of tomato soup sitting on a supermarket shelf is not comparable to an artwork for sale in an art market. A can of tomato soup is an ordinary, run-of-the-mill type commodity intended for an ordinary, run-of-the-mill type market (mass production/consumption). An artwork, on the other hand, is a hypercommodity intended for a supercharged market (unique object production/consumption). Whereas the to-be-realised-at-purchase price/value of a can of tomato soup is, with a little help from Marx, not that difficult to take account of, the to-be-realised-at-purchase price/value of an artwork is extremely difficult to take account of. Unlike with the can of tomato soup, how an artwork accrues its substantial price/value is to a large extent based on the unique and highly mysterious qualities of connoisseurship, collecting, and heritage. In fact, given today’s conditions, it appears that until an artwork is sent to a market and then purchased by a collector it remains simply an artefact among other artefacts, that is, simply a potential artwork. This latter scenario is in line with the current market determination of anything and everything and thus of all value.

No doubt gallerists and agents have an ‘interest’ in the artists they represent and thus in the ongoing production of the artworks they attempt to sell. But the word ‘interest’ suggests only the practical, calculative dimension. Connoisseurship, on the other hand, involves the way more perplexing dimensions of confidence, trending taste, and discernment, and so, for gallerists and agents there’s a required empathy with both artists and collectors, a knowledge of the complex psychology of both making and collecting. With gallery commission often running at 50% it’s game on today as to who brings the most value to the (successful) display and sale of artworks, artist or gallerist?

Publicly funded art institutions of all kinds are fully connected to art markets. Doubtless this is the case because many institutions collect artworks and/or house private collections of artworks, but another important factor is the presentation by all these institutions of artist projects, curated exhibitions, and so on. In other words, the curators/technicians/consultants of these institutions provide a (somewhat immeasurable) portion of the added value—e.g., the theory/narrative, provenance, potential heritage status, etc.—required for artists to become proficient in sending (via agents and gallerists) their artefacts to market so as (hopefully) to be purchased/collected and thus transformed into actual artworks. Hence, artists are not free content providers for publicly funded art institutions but rather receive ‘payment’ via relative degrees of cultural capital accrual; and, sometimes, from receipt of artist fees.

When it comes to those who enjoy the contracted status of university/polytech/private art school teaching staff it might be of interest to gauge the possible impact such status has on the saleability/collectability of the artefacts which they send to agents and gallerists; or even the impact such status might have on their capacity for producing artefacts in the first instance. In fact, the entire art education nexus is a zone of the system that entails a lot of ‘working,’ and this from everyone involved, and often from a very young age. So too with ‘working’ the attention space: devices, (social) media platforms, websites, journals, magazines, publishing, etc. are in one sense already in the hands of the tamariki. What effect is this creating?

The hypercommodified art market as linked to a broader connoisseurship, collecting, and heritage industry seems no less but differently hierarchical and exploitative than industrialised or service-type labour/commodity markets. Power differentials and precariousness all around. Given the current modelling scenarios (e.g., entrepreneurship, competitiveness, professionalism, communication, critique, branding, etc.) that contemporary artists are delivering in a neoliberal and globalized commodity/labour marketplace caution is required when running possible futures. Nevertheless, correlative to all the above remarks and mixed determinations the subjectivity/agency of the artist is changing, mutating. Today, who do the artists think they are? What are we, the artists, becoming?

The art-life is a form-of-life freely assumed. The art-life requires no official training, no certification, no developmental stages, no creative or heritage industries, no curatorial or institutional recognition whatever, and so unquestionably an art-life is not a profession. For a life to become an art-life all that’s entailed is that the life render a singular object or event visible/audible. Or better, that it present, enact, perform, make manifest, create fresh and unique objects and events, new works, new forms of work; and that the ‘where, when, and how?’ of the presentation, enactment, performance remains an entirely open question.

KARMA-THEORY. Deskill-Reskill … Turn away from the current art system and view precariousness as a planetary condition, one thus shared by artists with all the other vast and teeming populations which compose the Earth: machinic, human, animal, vegetable, other … Help build a new art game with a different set of rules, rules set adrift along the flows and fluxes of a coming cosmotechnics. Meanwhile, perhaps making nothing is the way to go: Duchamp’s famous laziness. 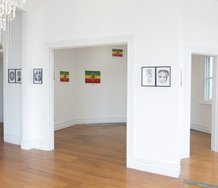 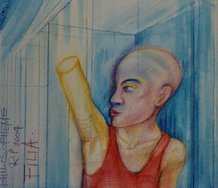 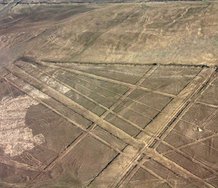 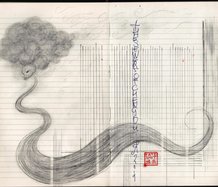