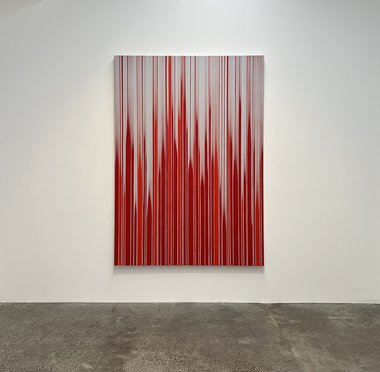 The emphasis is on bodily encounter—by way of title, its physiological impact on your ‘soul', artificial or otherwise—filtered perhaps through memories of both the Beatles' 'Rubber Soul' and the Plastic Ono Band. The physical mood, at times overtly impacted by the aural, is nevertheless affected by skin-tingling optical tactility; its spatially conscious, material texture, varies hugely.

In this punchy Fox Jensen McCrory show of extremely varied non-objective painting from seven overseas painters, the emphasis is on bodily encounter—by way of title, its physiological impact on your ‘soul’, artificial or otherwise—filtered perhaps through memories of both the Beatles’ Rubber Soul and the Plastic Ono Band. The physical mood, at times overtly impacted by the aural, is nevertheless affected by skin-tingling optical tactility; its spatially conscious, material texture, varies hugely.

Mark Francis contributes two unusual works. The first, Jericho, with its different types of vertical red striped bands and spikes, is set against a pale blue-grey field. The sharp points and intact twitching lines quiver and stab under the top edge, sustaining a compelling vibrancy with insistent pulses and strident counter-rhythms. Unusually the work is also accompanied by softer, slow-moving orchestral music from adjacent speakers, composed by Andy Cowton. It was inspired by the painting which has regularly pronounced (staccato) red and grey stripes—to me a different kind of (faster) mood.

The second work, the gorgeous Transverse Wave, has thin horizontal wavy lines regularly peppered with blips that are all vertically blurred. The resulting ubiquitous delicate streaks shimmer and dance across its rectangular surface; the smeared blots wink and flicker.

Less ordered than the above, Todd Hunter‘s hot tumbling (randomly juxtaposed) concatenations of summery jostling forms in The Upside Down feature an exuberant high key sensibility. In this Ab-Ex masterpiece, the seesawing turning ribbons and scrambled smeared shapes include clusters of hovering angular coloured elements that are only loosely pressed together, not jammed tightly. The airy spaciousness, floral positivity and cheerful linear colour exacerbate the wildly buoyant mood.

Günter Umberg‘s much smaller black painting, Untitled (Black) you don’t look through but at. It is an intriguingly shaped object that physically advances towards you. No retreating window with diaphanous forms, its floating solidity stays intact as a unit, appearing hollow and so denying its own impenetrability.

Hanns Kunitizberger‘s pair of dark oblongs of thinly brushed-on oil paint, Mitte 2021- Paar, 2021, sit on long pale stretchers spaced to emphasise the separation of the two on the wall; suggesting hovering parallel shadows that can be compared. The emphasis is also on understatement, a lack of solidity, the difficulty of refusing to make a definite or pronounced form—only highly delicate traces in the canvas, not on it.

This vibrant exhibition has an exciting dynamism. The varied works—spaced within three rooms—interact well, making it full of spectacular surprises.