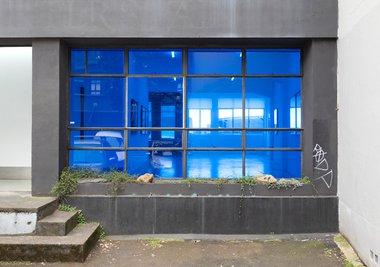 Peering through the window at Te Ao's installation, one thinks of Joseph Cornell's haunting blue 'memory boxes' of the early fifties. Cornell's iconic images of course are very very formal, rigid and static. Te Ao's: not so. They are agitated and restless. While Cornell's sometimes ache with repressed desire directed towards impassive subjects, Te Ao's subject broods and glowers, challenging the (assumed Pākehā) viewer—and being at times barely visible under the murky cover of darkness.

The first thing we notice is that only the streetside window overlooking Anzac Ave is covered with dark blue transparent film, with the type of blue seeming to be cobalt. At the far end of the rectangular gallery the large window is untouched, but its wide white roller blind is almost entirely raised, overlooking rooftops and letting in sunlight. The five exhibited photographs are chromatically subtle: usually a blend of black, pale sky blue, dark cobalt blue, deep indigo and royal purple.

The result is that the Coastal Signs space becomes a hermetic box for presenting these blue-washed works—two of them diptychs. A moving male Māori model is photographed against the projected landscape background of the artist’s central North Island family home, often of faint lines of pines set against horizontal skylines. The blurred humped body and waving arm shots, and three-quarter angled portraits and profiles seem suspended in a pool of streaky liquid. There is a flickering light, a shimmering glow and delicate hazy aura around the moving blurred heads.

William Gass, in his wonderful seventies book, On Being Blue, writes of blue’s synaesthetic abilities:

Blue is…the most suitable as the colour of interior life. Whether slick light sharp high bright thin quick sour new and cool or low deep sweet thick dark soft slow smooth heavy old and warm: blue moves easily among them all, and all profoundly qualify our states of feeling…If colour is one of the contents of the world…then nothing stands in the way of blue’s being smelt or felt, eaten as well as heard (p. 76).

Peering through the window at Te Ao’s installation, one thinks of Joseph Cornell’s haunting blue ‘memory boxes’ of the early fifties, enclosed rectangular assemblages like Medici Prince (c.1953), Medici Princess (1952-54), Untitled (Medici Princess) (ca. 1955), and Untitled (An Owl for Qwendoline), 1955. Cornell’s iconic images of course are very very formal, rigid and static. Te Ao’s: not so. They are agitated and restless. While Cornell’s sometimes ache with repressed desire directed towards impassive subjects, Te Ao’s subject broods and glowers, challenging the (perhaps assumed Pākehā) viewer—and being at times barely visible under the murky cover of darkness.

Pondering Te Ao’s use of blue in this show’s photography and the space’s natural light, the Māori word for a light sky blue is kikorangi (as adjective of the colour), while kahurangi describes the dark blue of the sea or evening sky, or something or someone honourable or precious. However kahurangi and kikorangi can also be any shade of blue.

A bit rarer is ōrangiuri for navy blue, which as such, may in the context of Te Ao’s projected background landscapes, refer to the punishing forces of English colonialism. The trees don’t look indigenous.

The show’s title, Tīwakawaka, is a variation of pīwakawaka, the Māori name for the hyper-active fantail, but it also the name of the grandson of Maui and one of the first settlers of the East Coast Bay of Plenty over a thousand years ago. Tīwakawaka was navigator of one of the first canoes that came with Kupe.

The individual titles help too: Kimikimi (To search); Pūaotanga o te ao (The dawn of a new day); Hara (Transgressor); Tuapōkere (Violet). They help fill in the interconnecting narrative.

Like the film-covered window glass, the words provide a fine meshlike filter our eye-guided thoughts wiggle through in order to grasp the significance of these portraits, backgrounds, bodily actions, pervading traditions and histories—sorting through the material to see how it coalesces, and then perhaps sequencing, blending, overlapping, juxtaposing, embellishing, prioritising or trimming. 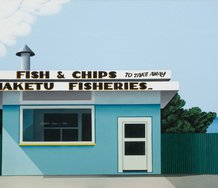