Eight Plus One Painters 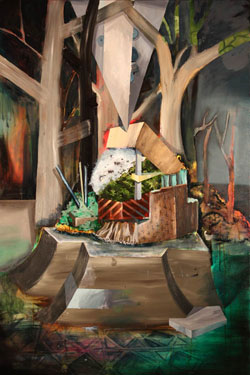 I mean I almost toppled out of my zimmer frame trying to laboriously transcribe the damn thing, but it interests me in the way mental images replace physical ones - outside of its elucidation of the properties of states of mind like love.

This is a very odd selection of new painters picked from up and down the country, nine as the title says, all apparently sharing a common state of euphoria. Yet Elliot Collins, Mike Cooke, Ruth Thomas Edmond, Georgie Hill, Eileen Leung, Marie Le Lievre, Tim Thatcher, Telly Tu’u and Pete Wheeler collectively make up a very mixed bag. There is little stylistic cohesion.

Of these Marie Le Lievre is probably the most well known, because of her extraordinary ability to manipulate liquid paint into mesmerising sensual surfaces on canvas. Her highly textured, darkly glazed forms are obviously remarkable but she seems compelled to supply a narrative component to her paintings, turning all images to handbags or suitcases, as if obliged to supply a story. To make the identifiable shape she blocks around its edges with a much lighter tone, creating a different sort of surface from the rest of the painting, one that is chromatically comparatively unmodulated. The jump between the two sorts of ‘paint zone’, the lack of integration, seems to be a result of an easy option, rather than resolving compositional problems early on.

The question of a different sort of integration arises with Elliot Collins’ painting, The sparrows. It is really a sort of short story as told by a thinking living canvas, a musing, an address superimposed over images of fluffy clouds in a blue sky. Collins’ text is very long, and when quoted in a blog like this its awkwardness becomes really obvious - but in a painting the words can only be read in short bursts. Reader behaviour is quite different. Thoughts are piecemeal and slowly assembled. Lines get disconnected and mistaken flow-ons occur, creating accidental meanings.

Processes of integration is quite different too, oscillating between mental picturing and ocular picturing - trying to blend the two together, merging imagination with the ‘outside’ physical environment.

The painting’s rambly but somewhat sweet text says this:

This painting is really very good but only because it loves you and is proud of everything you have achieved so far, and it can’t wait to see what you’ll do next. It’s been hovering over you with the sparrows and dust and oxygen molecules your whole life. It has watched in awe while you were courageous and brave and kind when necessary, and sometimes it is necessary even when difficult. It has seen you reach the outer limits of yourself and watched in wondrous amazement as you fell from the greatest of heights loving you all the more. This painting pines for your love in return. Not in that desperate needy way but in the way you want to be pined for, like the wind for the clouds. Sadly I am the only one who can know this because of my unfortunate ability to see such things. Others will fail to see what I have time to observe, because as you know I will outlive them all and the future seems unsure and distant. But still, I suppose all is not lost, at least we’ll always have each other.

Now you can tell by its earnest, sensitive tone it is the writing of a young person. And of course it does go on far too long. I mean I almost toppled out of my zimmer frame trying to laboriously transcribe the damn thing, but it interests me in the way mental images replace physical ones - outside of its elucidation of the properties of states of mind like love. There is some sort of deferral going on; a delayed anticipation.

Perhaps though, the work might have been better not painted at all. Instead it could have been a typed sheet pinned to the wall, with the above text prefaced by a detailed description of a large canvas covered with clouds on a blue sky, onto which the prepared words were then to be positioned. Or even better, an audio recording of a voice describing a typed piece of paper….