Last Ride in a Hot Air Balloon: Part 4 - The Economy 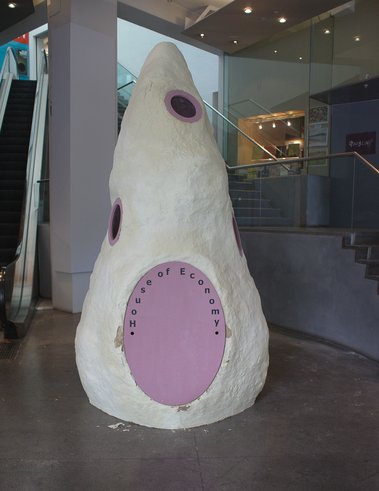 Anthony Iles' text 'Crises, Ruin, Allegory', especially the discussion of economics as ‘the dismal science', and his examination of the 1720 South Sea Bubble phenomenon, locks in tightly with the wonderfully poetic and visually nuanced Michael Stevenson video and the satirical posters and board game of Olivia Plender.

Of the five themes I have selected, the one of global economy is the aspect I think Natasha Conland handles more adroitly than any other. The above set of five artists makes a nice bundle that explores the nuances of this subject, with lots of interconnections. And even though I personally am not particularly interested in this topic, the work drew me in and to some extent, changed that. I got hooked.

Take a group like Learning Site for example - from Denmark and Sweden. I tend to dislike ‘school teacher art’, work which goes all out to educate and which openly presents information - usually historical - in the form of an installation or performed lecture, with the expectation that the audience will absorb it. Good education (most of us know) is far sneakier than that. It entertains so that the ‘student’ is unaware that they are learning. They become interested and take stuff in by virtue of having fun.

With Learning Site it wasn’t so much the disintegrating, mushroom seeded, ‘termite mound’, clay sculpture (House of Economy) at the base of the two gallery escalators that appealed to me - though it did - as the elegant little pamphlet made available with it. Anthony Iles’ text Crises, Ruin, Allegory is very informative and the illustrations helpful. The content, especially the discussion of economics as ‘the dismal science’, and his examination of the 1720 South Sea Bubble phenomenon, locks in tightly with the wonderfully poetic and visually nuanced Michael Stevenson video and the satirical posters and board game of Olivia Plender.

Stevenson’s On How Things Behave highlights global economics as ‘things’ and has an appropriately lugubrious mood set by the voice over, provided by Suzanne Mārtens. Her fourteen minute long, monotonously gloomy reading is offset by the skilful and witty linking by Stevenson of a wide range of texts. These range from philosophical treatises by David Hume and Nelson Goodman (on grounds for prediction and categorisation of qualities) to accounts of Issac Newton’s investment losses in 1720. They also include visual allusions to the economic-sunspot theories of W.S. Jevons. Stevenson’s imagery is meticulously thought out, with tracking shots of a long wall featuring a mural by Manfred Gnādinger, a hermit who died after his home was wrecked by the Prestige oil spill, and various incorporated circular (solar) symbols, such as hollow Russian, spherical, wooden dolls.

Plender’s set of snappily designed, parodic ‘Victorian’ posters is particularly amusing. One features a 2006 whale sighting in the Thames Estuary as an ominous economic omen, another references the suffragette Mary Richardson’s attack on Velázquez’s Rokeby Venus in 1914 in the National Gallery, a third posits an imperialist British seizing of Iceland’s bank assets, and one more warns of the availability of carved wooden nutmegs and other fraudulent comestibles on the market.

Her board game Set Sail For the Levant grimly sets out crime as the only viable alternative for the poor tenant farmer enduring increasing rents at the time of the Industrial Revolution. Faced with increasing debt, he steals the landlord’s gold and attempts to get to the Eastern Mediterranean where the law can’t touch him, and letting others pay the cost. Plender’s game is based on the sixteenth century Royal Game of the Goose, a early precursor of Snakes and Ladders or Ludo.

Garrett Phelan’s installation is much rawer visually and more openly abrasive in mood. It features a looped animated DVD, framed drawings, a separate but simultaneous crackling audio component picked up by a radio from a nearby broadcasting transmitter, and a purchasable comic (Selflessness in the Face of Adversity) in which Phelan’s wild ink drawings are positioned alongside Free Trade and Human Rights in a Sustainable Environment, an essay (handwritten by Phelan) by the curator and collector Jobst Graeve.

‘Free’ trade of course means not the liberty of people but the unimpaired flow of goods and services within a relationship of exchange that is often not balanced or equal. As a means of bypassing the self-interest of banks and corporates, Graeve has devised a formula for calculating a fair pricing system for all goods and services, taking into account the energy necessary for the production and fabrication of raw materials, the effect on workers’ health, the recycling potential and time taken, along with the effects on energy, wealth, and the environment for both production and consumption.

The last artist in this group has a contradictory lightness of touch and far less intense ambience. Jorge Macchi’s videos of manually wound music boxes playing cardboard strips of punched holes stating sentences of economic catastrophe from newspaper headlines, are surprisingly pretty and buoyant. They don’t sound random or grimly chaotic as you might expect, but are perversely melodic - as if these events’ calamitous significance has been exaggerated. They seem oddly celebratory and uplifting, even optimistic, thumbing their noses at fiscal preoccupations and any anxiety about prosperity.

The fifth and last Triennial theme coming up: Generating Dialogue