Inspired Survey of the Human Form 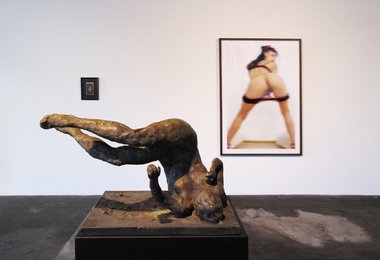 This is a contemplative show - even if it is some pornstar's out of focus derrière you are looking at. There is deliberately no sound, but of the three moving image contributions, two (Emin and Schneemann [who has a 1967 film]) are highly energetic with images jerkily darting around the screen. The third (Abramovic lying under a skeleton) is slow, subtle and highly ambiguous in its interpretative possibilities.

Naked is one of those dealer shows that radically alters our perceptions of what dealers can do to attract new audiences to their premises: it is a high quality art historical survey looking at the nude, sometimes partially clad body. With 23 exhibits, one of which is over 8000 years old, its sophistication makes it worthy of any municipal institution, and is a worthy (though smaller) Auckland parallel to the show Justin Paton organised for Christchurch Art Gallery over Christmas, The Naked and the Nude.

Because it is not reliant on any city collection Naked is far from fusty or cautious. In fact, whilst not gynaecological or proctological, the works of Mapplethorpe, Ruff, Schneemann and Emin will undoubtedly upset some. The media used range from graphite drawing, photography and documented performance to animated monoprints, abstract monochromes and bronze casting. The subject matter varies from the 9/11 catastrophe or the nature of each individual death, to self-pleasuring and the pornographic gaze, with moods that vary from slapstick comedy, states of reverie, the frenetically convulsive and the salacious.

Jensen has written no essay for this project (though he has for other much smaller shows he has put together) but there are lots of interesting interconnecting threads (or bundles) that are obvious.

There are no duds in this show. All the displays are superb - so it hard to pick highlights. I particularly like Schneemann and Emin’s frenetic moving image material and Fischl and Harrison’s gorgeously patinaed Rodinesque sculptures but the photographs, prints and the drawings are just as exciting too.

For example, Sam Harrison’s woodcut of two standing women is especially impressive with its dense grainy and shadowy hatching, while Jude Rae’s large drawing of a nude balancing on one leg has real compositional flair. Its sinewy, crisply articulated, vertical form vividly contrasts with the loosely brushed on, smeared horizontal background.

There is also a Louise Bourgeois drypoint of a flayed female skin (oddly like an ancient fecund goddess) hanging off a hook that is highly ambiguous in its creepy humour - a comment on the self and appearance perhaps, while the pretty Winston Roeth paintings puzzle initially but fit in with the content of Schneemann and Bourgeois.

This is one of those shows with something for everybody: great moving image, stylish virtuoso drawing, intricate casting, items of profound contemplation and plenty of humour. A treat for curious Aucklanders.