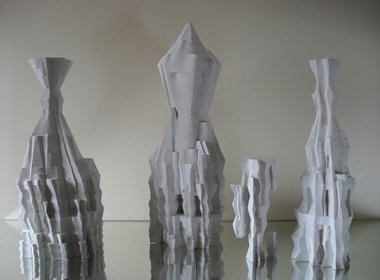 'thisissand illustrations' is on the Window website and involves an interactive drawing programme and Densham's use of it. In his artist's statement he links time with the temples' decay and the gradual processes of sedimentary collapse. He is particularly interested in the notion of fluidity and how nature over time destroys fixity, no matter how solid.

In this exceptionally pristine exhibition at Window, in the Auckland University library foyer, Antony Densham presents four vertical towerlike structures on an elegant mirror-topped table. They look as if they could be made of plaster and are based on Buddhist temples that the artist saw in Cambodia. They are of different heights, though approximately around about a metre and a quarter, are extremely intricate as if designed on a computer, and play on the reflected inverted forms within the silvery table surface.

The complexity and delicacy of these white vaselike forms that look like stacked narrow pyramids or cones, comes from the presence of their fine strata - horizontal layers that are about a quarter of an inch thick. These thin slabs, all in heaped up arrangements, allow the forms to swell out and contract. Little projecting platforms appear, as well as niches, tiny door holes and caves. They seem to refer to skinny cliffs, limestone ‘needles’, or stalagmites and stalactites, as much as temples. A few small towers are positioned near larger ones, as if once solid geological links have now been eroded away.

Some however have a symmetry that makes them look like wheel-turned pottery, or lathed wood - and so, man-made or architectural; hence the temple connection. Densham’s constructions are not as organic as say Ruth Thomas-Edmond’s work currently on show at Te Tuhi, where her recycled cardboard bends (stratified vertically: not horizontally) and is vigorously painted. Densham’s sculpture looks as if it has come from a Max Ernst painting or a Ballard novel. The towers also could be minicities by Charles Simonds, made while thinking of Kurt Schwitter’s Hannover Merzbau.

The fineness of the apparent ‘lamination’, and the fact these thin enigmatic forms create considerable impact without being too big, draws you in close so you can study the steplike edges along the wobbly contours. The stillness of the flat mirror glass at their base makes them appear to be projecting out of a rectangular lake. It is an extraordinary, oddly haunting, image - as if from a dream - that beckons and which is not remotely clinical. A wonderfully thought though and evocative display for Window.

There is also an online component related to this work, thisissand illustrations found on the Window website. It involves an interactive drawing programme and Densham’s use of it. In his artist’s statement he links time with the temples’ decay and the gradual processes of sedimentary collapse. He is particularly interested in the notion of fluidity and how nature over time destroys fixity, no matter how solid. The painted image here is related to that.