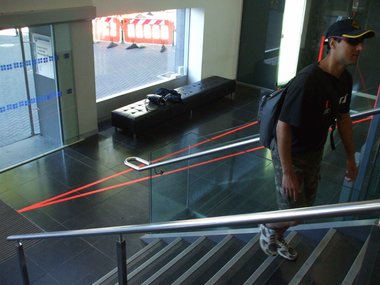 Standing by them, you can see the orange floor and gallery Window lines reflected in the various glass sheets positioned below the staircase handrails. They exacerbate the floating nature of the garish colour, repeating its reflected shimmering vectors and reinforcing Gardiner's boldly aggressive act of running the tape out to meet the foot traffic.

Rob Gardiner lives in Auckland now but he once was a vital member of Hamilton’s exhibiting scene, as well as the instigator and funder in the eighties of that city’s then active Centre For Contemporary Art -a converted hotel. He is now known of course, for the Chartwell Collection. Recently at Two Rooms and Sue Crockford’s K’ Rd window space he exhibited the results of research he has been doing for many years, moving gradually from painterly abstract painting to constructivist wall sculpture made with wire, cardboard tubes, plastic mesh, elastic cord, pencil line and shadow.

His current exhibit at Window, in the entrance to the Auckland University Library, is unusual spatially. It features a hot orange v-shape on the floor by the base of the library steps in front of the sliding glass doors. It runs back to two different lengthed parallel lines taped to the thick glass Window frontage.

The configuration initially entices you to focus on the contents of the Window gallery - as if looking down a glowing gun sight - but then you begin to look in the other direction, to follow its convergence of lines to the acute-angled point. You change your mind as to where its ‘action’ is located by looking back over your shoulder towards the Killeen cut-out with matching orange beetles on the far wall.

Within the ‘Window proper,’ the vertical display tray behind the glass and orange tape, Gardiner has attached on a black painted wall, two pieces of white vinyl stretch fabric: one a triangle, the other with four sides. In each a top corner is held away from the wall by a piece of orange plastic piping. A different length and different diameter for each. The other corners have rubber coils and taut elastic rope ties that make the pale 3D forms cling to the vertical black plane so from a distance they look like slightly crumpled paper shapes projecting outwards. They could also be interpreted as two eye patches in a visage facing the glass doors.

Standing by them, you can see the orange floor and gallery Window lines reflected in the various glass sheets positioned below the staircase handrails. They exacerbate the floating nature of the garish colour, repeating its reflected shimmering vectors and reinforcing Gardiner’s boldly aggressive act of running the tape out to meet the foot traffic.

The vertical lines stuck on the frontage glass also repeat (in reflection) the silver struts holding up the two sets of inner banisters behind the outer glass, orange lines echoing silver and even repeating the vertical bar thickness.

In such a manner, moving around the space, back and forth analysing its architectural peculiarities, the viewer is encouraged to find links. On the other side of the room, standing by the Killeen, one can see angular reflections of the sky on the staircase glass that mimic the fabric quadrilaterals. The work prods you into careful looking; a catalyst for viewer movement and investigation.