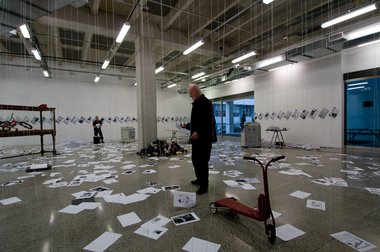 The ironically black and white installation is calculatedly non-specific - deliberately vague. It encourages a poetic ambience rather than a focussed attack on any one faction: a melancholic condemnation of traumatising and wasteful violence in general.

Performance art as a genre is almost unknown in this country, for although the art cognoscenti might know about Andrew Drummond, Jim Allen and Alicia Frankovich, those individuals have never been hugely legendary in our community the way that say Joseph Beuys was in Europe in the eighties - when many academics considered him the greatest artist of the twentieth century; even more influential as a dynamic personality than Picasso or Duchamp.

For this reason it is exciting that AUT have brought two such practitioners out here from Northern Ireland. Their visit will undoubtedly regenerate an interest in the genre in both islands, for they have travelled to Dunedin to do a work there.

At St. Paul St. Andre Stitt and Alastair MacLennan presented a 24 hour long performance in Gallery One, and the physical remnants of that event, Spectral Arc: Vanishing Point, are now on display as an installation. Across the corridor in Gallery Two three videos are being played on plasma screens. One is an hour long, highly condensed summary of the 4/5 May performance - filmed and edited by Joe Jowitt. Another is Reclamation, a two part doco about firstly Andre Stitt’s series of five Akshuns in Cardiff in 2005, and secondly the watery remains of Capel Celyn, a village in Wales submerged to provide water for Liverpool. And a third is Alchemist, a beautifully filmed and recorded video by Richard Ashrowan made on the Scottish borders - featuring MacLennan and another performance artist, Sandra Johnston.

In Gallery One the ‘residue’ from Stitt and MacLennan’s collaboration has transformed the space. There is lots of shredded, hand-sliced, and intact black and white photocopied paper, wildly scattered on the floor, piled up over objects, in plastic bags, or on a table as stacks of A4 sheets as if waiting for a convention. Other pages hang sloping from the walls, as do lines of string holding suspended boys’ underwear and shoes, or crumpled up news items. The ‘suspension’ seems to be about disbelief, for the newspaper cuttings are mostly about the Troubles and victims of bomb blasts, or victims of ‘non-political’ crimes such as serial killings. Mixed in with the separated portraits and typed out names are also articles on local performance art, and more poignantly, in vitrines, children’s scooters and trikes. Over the sound system a list of names, read in alternating male and female voices, is played backwards. Stitt has also drawn crisscrossing ‘exploding’ forms with delicately meandering lines over the photocopies on the walls.

Yet the ironically black and white installation is calculatedly non-specific - deliberately vague. It encourages a poetic ambience rather than a focussed attack on any one faction: a melancholic condemnation of traumatising and wasteful violence in general.

Fascinatingly, as individuals MacLennan and Stitt are very different, mentally and physically. There are different body languages and psychologies in the personas they present. Stitt comes from a Beuysian shamanistic and working class agitprop tradition, and MacLennan more a humorous zen, anti-language and anti-logic sensibility. Stitt is frenetic and bristly, a great scatterer of objects with a compact wiry physique, while MacLennan is slower and more serene, younger but bodily heavier and taller. Their joint work with its love of catharsis, ritualistic process and pent-up turbulent energy, is very influenced by ‘70s Viennese Actionism. However in 2011 this seems like a time warp. It’s highly incongruous. Maybe for them that is a plus.

So while the performance side of the AUT show is not particularly compelling as watchable live action - being more about the continual process of transforming a space, the room with its shambolic (even lyrical) arrangement and suspended fetish items (ciphers of tragedy) does have an enigmatic, albeit relentlessly oppressive, feel - especially with the mesmerising backwards sound of recited names, and the overtones of a disintegrating collective memory.

The three videos in Gallery Two are very informative in terms of context. They show the performances, particularly Stitt’s, to be openly theatrical (not contemplative or ‘prayerlike’ actions that can be executed in isolation but rather activities fully cognisant of an audience). In Reclamation we see him manically hacking rectangular holes into a university gallery wall (that students can peer through from the other side) and tar and feathering their edges as if punishing the cumulative weight of art history, especially painting. The irony is that Spectral Arc: Vanishing Point has a Pollocky and painterly feel to it, but using shredded paper not pigment.

Alchemist is helpful because it depicts McLennan characteristically balancing branches on his head like a Holy Fool, as he does shoes, books and other objects in Spectral Arc; Vanishing Point. This appears to be a symbol for holding concepts in one’s mind, a sort of ideational mantra - a merging of the mental with bodily material. MacLennan seems to be a foil to the histrionic and agitated aspects of Stitt, a cooler sensibility - though obviously Stitt has his meditative, analytical sides too.

This is a carefully put together show, with themes such as water and blood uniting the two earlier videos. Some performance art escapes charges of attention-seeking exhibitionism by having a gravitas that banishes such thoughts, but this (in my view) is not such a work. Yet it is a valuable presentation to visit, firstly because it is so unusual - and as such, is educational - and secondly, because the installation (free of the distraction and agency of real moving ‘artistic’ bodies) does have an evocative and highly disturbing quality worth experiencing directly.