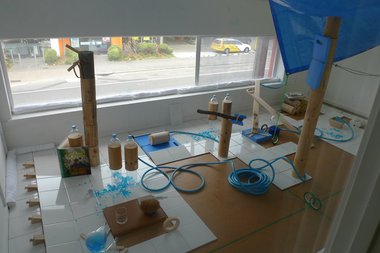 This installation is as much concerned with the formalism of its construction as it is with any specific narratives. Its objects with their near strict geometry and reduction of form and colour - blue, ochre and white - establish a presence in the gallery that is as loud as it is composed.

Blue is an installation that looks as though it was crafted by Zina Swanson in response to the constraints of ABC Gallery’s two separate spaces. Either out of frustration, or a desire to put things right, Swanson has taken advantage of the separation of spaces within the gallery and assembled a before and after world of something that could be hydroponics experiments in progress. It’s an installation by an artist taking an opportune moment to work a familiar space, shaping and manipulating an interior in a way that brings out the best in her practice, being both site specific and drawing from a known iconography that she continues to reinvent.

Now working from a studio at ABC Gallery, Swanson has assembled an installation of objects, devices and manuals that infer the promise of the natural world in the safety of the home. Blue considers ABC’s two separate rooms and responds, paradoxically, with an installation that commands the space by blocking the gallery visitor’s entry into the room facing on to Lincoln Road. Swanson allows just enough field of vision to peer in from the side. Physically confined to half the gallery the visitor is engaged as participant and equally relegated to the position of viewer from outside. The only link between gallery spaces is a plastic hose that pokes through a small hole in the wall, seemingly about to germinate the room, measured and prepared with masking tape.

The challenges Blue makes and the frustrations of not being able to enter and inspect are well made, restricting and influencing an experience of space and environment, seemingly occupied by all the kind of stuff that humanity has invented to manipulate, command, control and recreate the natural world indoors: Floramist spray and plant grower, The Household Plant Survival Manual and the Reader’s Digest Complete Guide to Indoor Plants, plus the artificial containers, shade cloth, hosing, etc. Yet this installation is virtually absent of the presence of native flora or fauna. The wooden truncated posts that occupy the space are in the process of assuming the guise of practical tools, crafted to reflect the geometric precision of other items assembled in the room.

These objects also draw attention to an installation that is as much concerned with the formalism of its construction as it is with any specific narratives. Their near strict geometry and reduction of form and colour - blue, ochre and white  (Swanson makes them seem like primary colours) - establish a presence in the gallery that is as loud as it is composed.

All bordered, wrapped, sealed and framed by clean white blankets in a makeshift glasshouse - in the absence of any plant life, the premise of items and devices to care, protect and nurture the natural world in constructed environments seems somewhat peculiar - A bit like loving and caring nature to death. Indeed, Swanson’s work seems less about a particular commentary on the environment and more about a degree of estrangement or dislocation from the world, or a metaphor for the ambiguous nature of human behaviour - a premise about caring and protection that recognises an implicit smothering and suffocation. From this perspective it represents a refining of ideas by the artist and a wider consideration of their potential for both small stories and grand narratives.