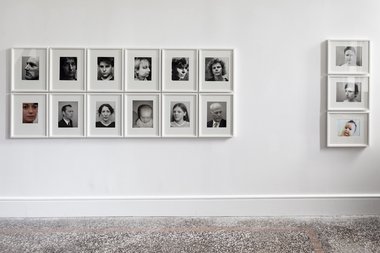 The New Objectivity of the 1920s made explicit what the Realism project of the mid-nineteenth century only hinted at: that, visually, appearances were the lodestar to deciding what's what, not any belief about what might constitute substance. It was a switch that turned photography on. This didn't, though, eliminate the human quest to fathom those larger questions as to what appearances may mean. But a Rubicon of sensibility had been crossed and the only way was forward.

Peter Peryer’s work often depicts very ordinary objects but his project is anything but ordinary. The curatorial basis of this exhibition seems to centre on a quite conventional notion of portraiture, but again, Peryer’s project is anything but conventional. A case could be made that his entire oeuvre is a kind of portraiture - the act of portraying the spine of his fleshing out the world - but that’s a discussion for another time and place.

This Gus Fisher show is a slightly expanded and updated version of Peryer’s photographic portraits 1975-2004 exhibition at McNamara Gallery Photography in Whanganui during October 2010. In Auckland the show’s content extends to 2011.

Both exhibitions are helpfully entitled Other. This one, simple word dismisses one major concern: that the photographer or his curators have settled on the surprising view that his project might’ve become ordinary or conventional. The description of Other was a semi-redemption in the 1980s of the marginalised. On the one hand, a recognition of valid difference, but on the other (no pun intended), an implicit retention of the majority’s power to do the describing. The Other was in fact a very compromising definition. The door may have been ajar, but those Other politically savvy enough placed their foot in it to prevent its further slamming shut against them. Thanks bro, but no thanks.

Peryer’s portrait images propose an otherness for that majority still easy with its power to describe. Power and the portraiture genre are very easy bedfellows, an onanastic relationship the polite conventions of conventional art history rarely acknowledge. The genre of portraiture is a product of the will to power. Look at this picture of us: we represent the prevailing values. Never mind the virtues of democracy, get real; we’re running this show, buddy.

Typically, Peryer pulls the rug on all this stuff. He’s more than intelligent enough to know what the score is, but carefree enough not to bother with it. The abject silliness of any desire to be so acknowledged pictorially these days is, rightly, beneath his interest. Chairmen of Directors have to look elsewhere. But he’s not into any sort of cynical caricature, as attractive as this prospect may be. His subjects maintain their human dignity, but their individuality is rendered as an essential ordinariness under the pitiless gaze of his lens. Shorn of any social exclusiveness, Peryer’s subjects become specimens of compelling human and aesthetic interest as much for his depiction of them as for any claim they might have as deserving subjects on the grounds of status or appearance. This, in short, is Peryer’s great gift as a photographer. He’s not a mere “portraitist”. No slave to senses of entitlement, his project transcends such considerations. But just what that transcendence might consist of is all part of the story.

The tradition of portraiture is predicated on specialness: ranging from the awesomeness of political power to the seductiveness of good looks. We so want to be like them, so want a share of the social grease such awe and seduction provide. Peryer’s endeavour suggests that this lust is misplaced: we are like them anyway, all provocation towards climax aside. As Salvator Dali once remarked “The only difference between myself and a madman is that I am not mad”. (Yeah right.)

The entitlement to a sense of significant self that the Facebook phenomenon implies is subtlety undermined by Peryer’s portraits, and is a sobering antidote to the otherness claimed by those whose individuality is entirely defined by a crowd. It’s as if the traditional daily examination of conscience had been subcontracted to a branding enterprise too comfortable with its own commercially-oriented mission statement. In the midst of this rising clamour for attention, it’s probably necessary to be reminded that photography’s tradition is grounded in realism, not fantasy.

Peter Peryer burst onto the photographic scene in the mid 1970s with potently introspective images of his then partner Erica Parkinson, his subject and Muse. Justin Paton has said of this body of work that Nothing in New Zealand photography of the seventies has the same psychological charge or stark glamour. Two decades later [he was writing in 2001] they still feel urgent, as if the need to look ignited the need to be looked at, and the photos just flared into being. Love songs, accusations, homages, interrogations, fantasies, pledges of attachment, and erotic declarations, these twenty or so photographs live a life as complex as any forged inside a partnership, in that strange, pressurised space between ‘I’, ‘you’ and ‘we’. It would take the space of a novel to track the ricochet of intimate gazes.

Peryer’s 1970s’ expressive intensity soon ran out of steam. As the tramp in Jean Renoir’s Petite Theatre wearily confessed “I was born a fool, but life teaches you things”. The operatic scenario of Erika - sort of Bill Henson on valium - was supplanted by a more sober approach. The “New Objectivity” European movement of the later 1920s and ‘30s has undoubtedly influenced Peryer’s practice since the later 1970s. Portraitists such as Lucia Moholy are traceable godmothers to his mode of portraying. One can ape a style easy peasy - indeed, these days, it’s almost an imperative - but knowing what that “objectivity” might mean outside considerations of mere style is given to few except the most perceptive and critically acute. The wrestling between substance and appearance remains volatile, even within the pluralist debate promised by Postmodernism. St Thomas Aquinas may be quoted rarely these days, but his project - as intense and relevant as Peryer’s - still has the insights to give the leaky bark of the contemporary some draft.

Of course, there have been a few developments in psychology since the thirteenth century. At least enough to know that simplistic distinctions between substance and appearance, objectivity and subjectivity say little about the complexities of lived experience. Hence Paton’s call for the space of a novel to get it sorted. For whatever reason, though, it seems that developments in psychology have impacted least on the tradition of portraiture, whose weight is still firmly skewed towards some kind of substance implied in “mere” appearance: the body having a soul, the face conveying the essence of a personality. Peryer’s Erika project was one part tribute to these Romantic notions and one part scouring their foundations, a foretaste of the debate in the ‘80s about the nature of “the self”. Paton’s Erika essay again: “…Erika inhabits the still centre of a host of ambiguous narratives.” and again “Pulled in through the lens and burned on to film, Peter and Erika’s role-plays and fictions become more ‘real’ than real life”. With the portraits in Other we’ve exited the theatre. These newer portraits lack any element of dressing up, role-playing or any obvious flirting with fiction.

Paton makes reference to “the summoning power of photography, the strange, nearly alchemical ways in which the medium remakes everyday life”. It’s in this remaking that photography’s had a largely unacknowledged but major impact on the tradition of portraiture. It has removed that mere from “mere” appearance, raising the look of things to a status unreliant on questions of substance as ordinarily understood. Indeed, part of photography’s remaking involves a reconstruction of those notions of substance.

Phenomenology, per se, was unknown to St Thomas, but the processes implied in the act of perception were not outside the scope of his investigations. The New Objectivity of the 1920s made explicit what the Realism project of the mid-nineteenth century only hinted at: that, visually, appearances were the lodestar to deciding what’s what, not any belief about what might constitute substance. It was a switch that turned photography on. This didn’t, though, eliminate the human quest to fathom those larger questions as to what appearances may mean. But a Rubicon of sensibility had been crossed and the only way was forward.

Warhol’s prophetic utterance that one day everyone would be famous for fifteen minutes raises further refinements as to the nature of appearances. Realism’s assumption that something lay behind them seems to have vanished with the growth of celebrity culture. Does nothing work for you? That photography has had such an integral part in this development is cause for either shame or pride depending on your generation. Perhaps by now Paton will need two novels to get it sorted.

Barack Obama and Ashton Kutcher would appear to accrue roughly equal amounts of attention in various strands of today’s media. To conclude their relative standing in the wider scheme of things is likely to be predicated on certain beliefs around substance. Whether this is some sign of a hopeless redundancy, only time can tell. But in the meantime there’s no doubt that Peryer’s portrayals are integral to a debate keeping us alert, awake to those shifts in cultural perception having consequences beyond our most extravagant imaginings.

Peryer’s portraits are, perhaps, more about wakefulness than about portraits of individual human beings. He’s dealing with likeness all right, but the question is likeness to what. For a start, in the genre, it’s usually likeness to prevailing notions of portraiture. Further, just how does the insistent ordinariness of his portraying compute with depicting individual human beings? Why should he bother? Why should we be expected to bother looking at them? What is it about his subjects being depicted, what is it compelling our interest? Peryer’s proposition is two-fold: he cocks a snook at our assumptions of worth, and simultaneously reminds us of a democracy that is inherent in the photographic medium. Julia Margaret Cameron described her project as “recording faithfully the greatness of the inner, as well as the features of the outer man”. Peryer records, equally faithfully, the features of the outer person without the complicating burden of illuminating the inner. And in doing so he welcomes us to a commune untainted by compromises implicit in the operations of power.

Peter passed away yesterday, a tragic loss for NZ photography. A consummate and restless creator of images, he will be ...

Peter passed away yesterday, a tragic loss for NZ photography. A consummate and restless creator of images, he will be enormously missed. It is hard to imagine him not being around, he was so energetic, productive,and plain curious about the world around him. A wonderful artist and vibrantly alive personality..