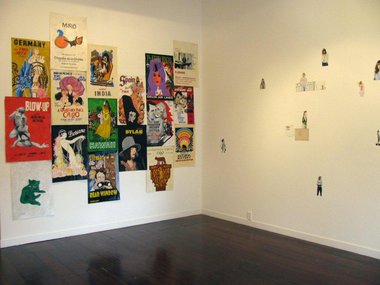 With raw and improvised paintwork van Zon's hand-copied posters intrigue as expressions of longing for other times (sixties and seventies) and other places (Israel, Spain and Hawaii). Fragile, worn and tatty, as if salvaged from student flats of four decades ago, their paintwork is casually loose - as if they are designed to be fakes only seen from a distance, like props on a theatre stage.

These three artists at Melanie Roger push and prod at the activity of illustration to try and mix technique with a bit of ideational bite - so that more than just showing off manual skill is involved, that there is some sort of conceptual methodology spliced in; even if vague.

Kirsty Bruce’s acrylic and watercolour images are amazingly intricate in their detail. From the middle of the room you’d swear they were photographs cut from fashion magazines; you have to get really close to see that they are not.

However technique alone doesn’t necessarily produce satisfying art, and cutting the delicately coloured figures out so they are not in rectangles of paper and placing them in arranged groups on the wall, doesn’t really lead anywhere. The wall becomes a field with sets of groups but the juxtapositions within these clusters seem flat. There is no semantic logic and no spatial tension. The image combinations don’t seem thought out despite Bruce’s extraordinary technical skill.

Sam Mitchell’s obsessively repeated portraits of David Bowie in his incarnation as Ziggy Stardust are much cruder in their paint application than Bruce’s magazinelike images (which oddly I prefer looking at), but being painted on old hardcover books (with their pages removed) in pairs gives Mitchell’s Ziggys an unusual mood, especially when you examine the titles and search for verbal connections. This slightly oafish quality of Mitchell’s portraits - I find them clunky - is accentuated by their being on cardboard and cloth (a weird support for paint handling), especially if you are used to her earlier images on glass.

Ultimately Mitchell’s Bowie infatuation needs a twist beyond such fusty tomes that by association effectively suggest Ziggy has a use-by date. Perhaps she needs to do a lot more of these coupled portraits and fill the room to hammer the point home. Be wildly excessive. Like say Allan McCollum.

Mitchell also has a display of cream-coloured ceramic busts in the window. These work better, partially because they seem to satirise the ubiquitous busts of Beethoven or Handel you find in musical instrument stores. These distorted heads have a nice immediacy as manually made sculptures, being free of colour and the attempted conceptual layering of the paintings.

Two groups of fake film and travel posters made by Erica van Zon are the best things in this show. With raw and improvised paintwork they intrigue as expressions of longing for other times (sixties and seventies) and other places (like Israel, Spain and Hawaii). Fragile, worn and tatty, as if salvaged from student flats of four decades ago, their paintwork is casually loose - as if they are designed to be fakes only seen from a distance, like props on a theatre stage.

These have a shrewd sense of retro glamour, but as if painted by Soutine, so they have affinities with Mitchell’s busts in the window. They also look great framed, as if fussed over collected, archival items in a museum. There is also a hint of melancholy in Van Zon’s ersatz airline posters, lacking precision but blending with a wistful aching humour, a delight in various past styles of advertising, a pleasure in their reworking and display.