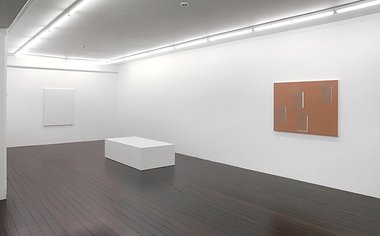 Nick Austin
Notebook of a Spider

In this, his second exhibition at Hopkinson Cundy, Nick Austin presents five works made in Dunedin this year while residing as the Frances Hodgkins Fellow. The presentation carries on the whimsy and lightness of touch so evident in his earlier Gambia Castle shows.

Located just inside the door, Lettuce Poems is a painting of four manila folders containing loose sheets of paper, lying on a table. The table is a soft greyish brown and the tonally matched folders gently pulse, offset by right-angled L-shaped slivers of white that set up a counter rhythm.

The folders are labelled: Little Gem, Matchless, Grandpa Admires, and Winter Density. So the ‘letters’ poems could in fact be these hand printed titles as four poems in their own right - like say Robert Creeley’s small, minimally worded, poems from his book Thirty Things (1974). (For example his Alice consists of two lines: The apple in / her eye.) We enjoy Austin’s phrases as floating fragments; delectable snippets of articulated thought - to be savoured. For spoken sound and meaning.

A nearby sculpture features a tangle of fine wire lying on a rectangular white plinth. With a title like Death of a Mosquito it becomes a sort of one liner, an enigmatic riddle about an insect’s trajectory in space that is suddenly terminated. At one end is a red dot - assumingly human blood in an ex-mozzie.

One painting, The Past, shows a doorway in a white corridor that doubles as gift card. On the door window we can just make out HAPPY BIRTHDAY in reversed, faintly coloured, letters, a portal we have passed through and are now rapidly moving away from. It is a symbolic mental representation of past time and events located within it.

Where was I now? is a painting-sculpture hybrid that incorporates a protruding gallery corner and three linked ingredients. It is a observation about illumination and memory, something that can be mental as much as physical properties of light. In real space an unlit bulb suspended from the ceiling hangs in front of a black canvas on which a yellow radiance is painted; from the front the bulb seems to be turned on. Round the corner is another canvas, one totally black but not visible if you see the other canvas and bulb in co-ordination. It is in fact more truthful than them for there is no illusion. It is a comment on deception and painting - a theme that goes right back to Plato.

The fifth work is a freestanding sculpture of two wooden tables supporting a huge, duck-egg blue, coffee mug. Entitled Coffee Tables, it references the two ‘plinths’ more than the sculpture towering above them, for the title points to their participation. They become the ‘real’ sculpture though they are in a sense invisible, and their internal bookshelves repeat the enclosed space of the mug’s handle.

This show has a nice focus and consistency that runs like a stitched thread through the five items: an emphasis on tangential or sideways thinking, the use of distracting decoys that lure you away from the ‘real’ structure of each work. These ‘lures’ (that operate like a knight moving indirectly on a chessboard) separate the cup from the tables, the hanging bulb from the corner, the tangled wire mass from the wire ‘mosquito’ tip, the paper edges from the folder titles, the diverging dotted lines from the distant lettered doorway. A lovely set of off-centred, understated koans that concentrate the mind.