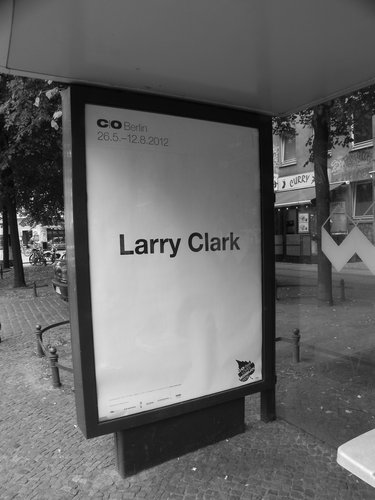 Private letters, newspaper stories, police mug shots; they all create a sense that there is something fundamentally wrong with how we as a society function, and the ways in which we try to cover over these with bright lights and make up. What is refreshing is the absence of some moralising solution. Clark isn't grinding an axe, especially since in many of the situations he documents he is also participating. He merely acts as a window into a very dark and difficult world, hidden from view but still present.

The difficulty in discussing Larry Clark’s work is perhaps best summed up by a poster I saw in a bus station a couple of hours after I had seen his new exhibition at C/O Berlin, a gallery for photography. It was a large billboard poster, plain white, with only the artist’s name written in the middle and the usual gallery small print at the bottom. Even in a city as liberal and open as Berlin, trying to advertise Clark’s work with one of his own images is problematic. (The main image used elsewhere to promote Clark’s show is a close-up of his muse Tiffany Limos’s pubic area, with the tattoo ‘Larry’ clearly visible).

It’s easy to look at Clark’s photography and especially his films (I’m thinking of Kids (1995) and Ken Park (2002) in particular) and feel almost exasperated with his portrayal of young adulthood, with the seemingly gratuitous presence of drugs and sex as frivolities to be engaged in without any regard for the consequences. Looking at Clark’s work now on show at C/O Berlin, I’m left wondering if perhaps it isn’t the casual viewer who is lost in a fantasy world. The selection of images from his controversial series Tulsa (published in 1971) and Teenage Lust (published in 1983) depict casual drug use, explicit teenage sexual activity and violence from the unsettling landscape of American suburbia. In this day and age, the dark underbelly of suburbia almost seems a cliché, with many stories having come to light which have long since shattered the illusion that fringe extremes were limited to urban environments. It is easy to forget of course that Clark’s groundbreaking images were part of what led to that realisation and the destruction of those convenient myths.

Some of the photographs are clearly staged with many of them depicting young men, naked and aroused, staring defiantly into the camera. Elsewhere the images are captured mid-action, with one young couple having sex in front of a mirror while another young man stands waiting for his turn. The caption explains that the young woman had been found in a park in New York high on acid and the two boys (and presumably Clark as well) bought her back to their apartment. Later in this series, an image of a pregnant woman calmly shooting heroin sits opposite the image of a badly beaten woman asleep in bed next to her angelic looking child. What is conveyed so strongly in these images is the sense of casual normalcy which permeates these events. To the participants, this is the day-to-day.

What makes his photographs all the more unsettling is that Clark’s images are from the view of an active participant. A handwritten note which sits between two haunting photographs from his Teenage Lust series admits to his own decent into the “teenage lust scene,” tallying the number of times he and his friends had sex with one of his friend’s sisters.

In a wider sense, Clark’s work addresses the composition of society, challenging the stereotypes of the American dream and the tranquillity of heartland suburbia. Added to his exploration of the private lives of American youth, a clear theme evident in his later work is the cult of celebrity. His changing style also relinquishes the linear storytelling and documenting of his earlier series. Clark’s collages juxtapose magazine pin-up posters of young men with scraps of evidence from their private lives, invariably full of heartache and personal pain, but as a fusion of media rather than a stark dichotomy. Private letters, newspaper stories, police mug shots; all of these create a sense that there is something fundamentally wrong with how we as a society function, and the myriad ways in which we try to cover over these with bright lights and make up. What is refreshing about this is also the absence of some moralising solution. Clark isn’t grinding an axe or standing on a soapbox, especially since in many of the situations he documents he is also participating. He merely acts as a window into a very dark and difficult world, hidden from view but still present. The ‘what happens next’ however, is very much left up to the viewer.