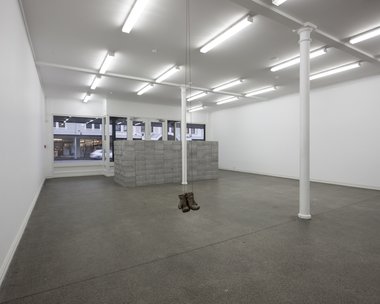 It is a pleasure to be able to experience such an international line up in Auckland as there are some legendary figures here. My only reservation is the odd sense of incompletion due to the downstairs ‘emptiness'. It just feels unsatisfying, as if a couple more contributors could have rounded it off, bringing the number of artists to ten and making the show more physically complete.

In this show curated by Brian Butler, ex-director of Artspace, we see works by eight artists resident in Los Angeles the city where he lives. Most of which have shown before in Auckland, particularly in Artspace. It is an odd hang because two are downstairs in Starkwhite’s large gallery and six are upstairs in the small rooms. The imbalance takes a while to get used to - especially as art hospitality guru Rirkrit Tiravanija’s skilful graphite drawings of street demonstrations which are hung upstairs might have better suited the downstairs context.

In the big lower space there are two works. One is a couple of hollow bronze boxing gloves made by Fiona Banner, suspended on parachute line - they chime musically when bumped. The other by Jorge Mēndez Blake, is a large block shaped sculpture made of concrete bricks, methodically stacked up over eight thin copies on the floor of Herman Melville’s 1855 novella Benito Cereno. The story revolves around a sea captain interacting with a slave rebellion on a ship and so the imposing block form, sited in front of the entrance, takes on metaphorical significance, its weight a trope for racist oppression and exploitation.

On the back staircase Blake has another work, a vinyl drawing of a clasped man chopping his way free from the flailing tentacles of a writhing octopus. Another metaphor seen while facing out the front Starkwhite window, it seems to refer to the struggles of daily life.

Upstairs in the four ‘boudoir’ galleries there are a variety of exhibits. Ann Veronica Janssens is known for her environments of light and artificial mist. In one room her green bulb casts a streaky light along one grey wall suggesting an anamorphic shape yet to be deciphered. It’s like a domestic aurora australis for home consumption.

Across the corridor is a Diana Thater room drenched in piercingly bright orange. Silver foil covers the windows and there are two coloured projections of long-petalled daisies, one moving horizontally, the other vertically. There are no animals (unusual for Thater) the foil flicking shredded light back into the wall projections. It’s very immersive; the amber colour is overwhelming.

Next door is a film by Kerry Tribe about a Russian spaceman (Sergei Krikalev) marooned in space during the nine months when the Soviet Union disintegrated. Using blurry fake film as an ersatz documentary and alternating between Russian voiceovers / English dubbed texts and vice versa, it is quite a long film with some genuine archive material and some fictitious elements inserted. It’s interesting to compare this with her later There will be _______ about to start at Te Tuhi, which is more like an extravagent Hollywood production, a murder mystery.

In the end room overlooking Karangahape Road are two extremely pristine ‘abstract’ photographs by Uta Barth that seem to be based on the doors of whiteware. Framed and float-mounted, the vertical lines traversing the photographic image mimic the objectness of the tightly framed work. The tastiest sort of minimalism you can get, Barth’s practice is unusual in its precision.

The other work is a wall relief by Jessica Stockholder. Famous for her large brightly coloured, freestanding assemblages that use everyday items like sofas and cases of rotting oranges, her wall works are comparatively tame, but worth poring over because of her inventiveness. She is very rarely shown in this country, so this contribution provides a rare opportunity.

It is a pleasure to be able to experience such an international line up in Auckland as there are some legendary figures here. My only reservation is the odd sense of incompletion due to the downstairs ‘emptiness’. It just seems unsatisfying, as if a couple more contributors could have rounded it off, bringing the number of artists to ten and making the show more physically complete. It feels like ‘international suitcase’ art, whereas the best such shows successfully disguise that fact.