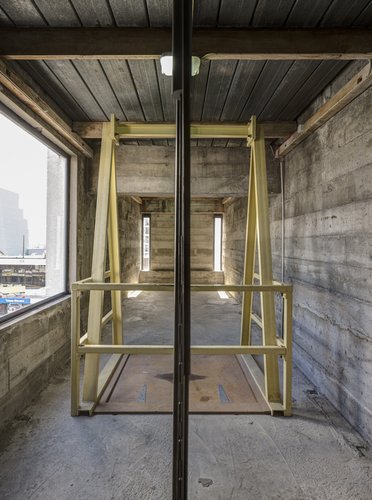 Some sections of the Artspace work (a variety of self portrait) appear for example to be like a harp or prepared piano waiting to be systematically plucked, yet being solid rods - not wire - they are loosely fastened like springs at their tops and bottoms. The work has an understated literalism, an illustrative narrative and sweetness very different from the Minimalism that inspires it.

The relationship between music and static visual art has within modernist abstraction a long history, of interconnecting themes that appear in painting more than say sculpture, not necessarily mixing the senses so they cross over as synaesthesia, but more parallels in mood, saturation and texture. And many contemporary artists who don’t use time based media, move comfortably in both circles, performing and exhibiting.

Yona Lee has a passion for the cello (she used to be a professional player) and this partly accounts for certain motifs in her linear steel installations currently on display at Artspace and Te Tuhi, works which have been precisely measured, cut, welded and bolted into the enclosing spaces. Her salient parallel lines could reference cello strings or in sheet music, treble or bass staves on which notes are positioned. The configurations seem to also wittily reference the graphic work downstairs in Artspace of New Yorker cartoonist Saul Steinberg, or his influence, the drawing-based paintings of the great Bauhaus teacher Paul Klee.

Both shows relate very specifically to the spaces they are presented in, exploiting the directional planar qualities of the architecture, and the surface textures and rhythms of the often raw building materials that enclose the visitor.

The two rooms are very different. One is narrow and dark, assessable only by a steep tall ladder. It contains a screen of vertical rods twisted into squiggly ornate configurations. The row of muted steel lines divides the long rectangular floor space down the middle and functions as a long drawing of steel on air, linking floor to ceiling.

The other space is an airy cube that butts onto a much larger communal space and which absorbs a lot of light from a large window facing the rear of the building. The grey floor tiles and textured ceiling play off in opposition to the right-anguled changes in direction made by Composition‘s parallel shiny metal vectors. These remain separated, taut and hovering. They are like fences with their shorter height, yet complex in their abruptly unpredictable shifts in plane, referencing the modular stacking of Donald Judd and the linear austerity of Fred Sandback.

Comparing the two, the Te Tuhi work explores three dimensionality, and the Artspace one, two - and the steel used is quite different in colouration, sheen and purpose. There is a sense of immersive installation versus looked-at drawing. One engages the moving body, enclosing it or penning it in as a farmer would sheep; the other, a not static but more restricted locus where Lee’s tensile inventiveness and nuanced humour draw you in.

Some sections of the Artspace work (a variety of self portrait) appear for example to be like a harp or prepared piano waiting to be systematically plucked, yet being solid rods - not wire - they are loosely fastened like springs at their tops and bottoms. The work has an understated literalism, an illustrative narrative and sweetness very different from the Minimalism that inspires it. (Lee discusses such artists and her interest in music in an excellent interview initiated by Alex Davidson, the new Artspace assistant curator. You can pick it up during your visit.)

These are unusual presentations, and work well in the two sites. Fine shows to bodily engage with.