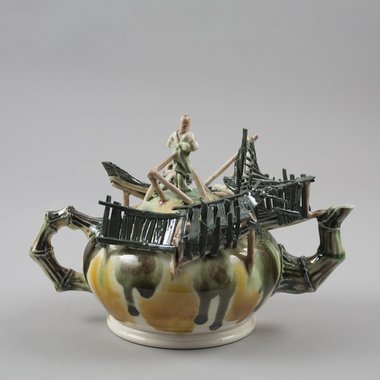 This show by Stratton seems quite controlled for someone of his virtuoso abilities - in the sense that he is not overwhelming but being more contained in his choice of options; almost tasteful.

Five years ago when Richard Stratton first exhibited his innovative teapots with Anna Miles in 2007, his work was associated with an African decorative sense, incorporated lithographic imagery, garish saturated colours, a pop sensibility and slab forms. Now he has moved far away from that. Most of this current collection of vases and teapots - presented in a long high vitrine in the middle of the room - is steeped in references to Chinese art, with more subdued softer colours, Lilliputian figures, bamboo spouts and spindly kindling scaffolding.

There is also another variety of teapot that is more like a boxlike house, related to a form of chocolate cake or blancmange dessert. These are particularly amusing as the jug shape takes on aspects of a lumbering animal - some fat elephant or squat dinosaur steered by a standing ‘driver’ on its back. You want to grab a spoon and lunge at its sides, for these ceramics look delicious.

Two other sculptures are ornate vertical urns, again with matchstick scaffolding but of cream colouration with a very thin honey glaze and some dabs of gold. These are more focussed on form, being restrained in their use of colour: austere but with flourishes.

This show by Stratton seems quite controlled for someone of his virtuoso abilities - in the sense that he is not overwhelming but being more contained in his choice of options; almost tasteful. Decisively unflashy, yet quietly impressive.