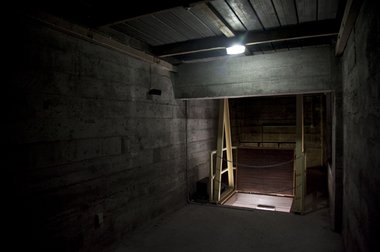 There is a shifting spatial dimension to this aural sculpture. The volume varies and is not unrelenting or physically excruciating, and is close to the ring oscillators used by a composer like Stockhausen. It's industrial with its scrapings, squawks and rattles, but not aggressive or hideously shrill, just consistently intricate with its rippling layering.

Deborah Crowe and Eldon Booth’s electronic sonic installation, high up in Artspace’s mezzanine floor, has the odd distinction of sounding louder if you are below climbing the Artspace stairs, than if you are actually in their small concrete attic, standing next one of the six sets of speakers. The installation’s raucous intensity seems to diminish as you approach and gain altitude.

Once you venture into the dimly lit grey room (one light only, with the two end windows blocked out) the sounds’ piercing intensity lessens as your ears adjust, and you start to slowly detect patterns. Five sets of double speakers on the walls provide the higher grinding oscillations that occasionally become staccato, turning into machineguns, then whooping car-horns, and the odd slice of human voice. A heavy box on the floor next to the open trap-door, provides a low frequencied rumble, a creaking vibrating shuddering.

In Tessa Laird’s accompanying essay she calls [Eddy]II work ‘sonic torture’ as if it is agonistic and designed to send you scurrying down the stairs. That is not my impression. There is a shifting spatial dimension to this aural sculpture. The volume varies and is not unrelenting or physically excruciating like certain experimental ‘feedback’ discs such as Lou Reed’s Metal Machine Music or Pat Metheny’s Zero Tolerance for Silence. Sure, the sound - its timbre - is closer to the ring oscillators used by a composer like Stockhausen than say an aurally understated sonic artist like Richard Francis with his grainy staticlike textures and delicate rustlings akin to crumpled cellophane. It’s more industrial with its scrapings, squawks and rattles, but not heavily turgid or ponderous. It’s anti-lyrical but not aggressive or hideously shrill, just consistently intricate with its rippling layering.

Some of the light entering the space comes in from floor level via the open trapdoor in the centre of the room that is fenced off. The resting wooden hatch subtly reflects the surface light of cars passing down Karangahape Rd that bounces in the side window at the top of the stairs, the horizontally wobbling shadows coincidentally in sympathy with the generated sound.

The mezzanine space itself has never looked better. The space visually is oddly calming - if not beautiful. As for the whole experience, if you consider yourself stout-hearted, it is worth exploring.