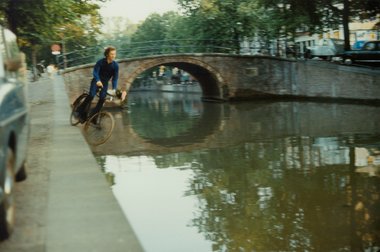 What comes across in this work as in several others is the way many of the works embrace openly themes of sentimentality and loss, as well as human fragility. In some works, like those of Ader or Dean, the mood is sombre. Elsewhere however, elements of the absurd or comical also come into play.

The new group show ‘Besser Scheitern’ [Fail Better], currently on at Hamburger Kunsthalle is a strong showing of international art figures, featuring the likes of Marina Abramovic, John Baldessari, Francis Alys and Tacita Dean - to name but a few. With a line up like that one could argue that a justified degree of expectation hangs over the proceedings, though in this case both the works and the overall curation by Dr Brigitte Kölle are fantastically cohesive.

As I entered the exhibition from the main gallery hall, the first room I encountered held a number of works from Belgian born artist Francis Alys. His works here, under the titles Rehearsal 1 and Politics of Rehearsal, 2005-2007 speak to the heart of the curator’s statement with its emphasis on Beckett. Alys’s text as part of Politics of Rehearsal elaborates on this, discussing rehearsal as being where “the attempt to formulate the story takes the lead over the story itself.” Perhaps the most well known of these works, where a battered red Beetle drives slowly up a hill to the sound of horns, falling back down as the music falls apart, adheres the most closely to Alys’ so-called politics, where the process of fine-tuning this music piece defines the story itself of the driver’s attempts to navigate up the hill. Another video shows a young boy kicking a plastic bottle up a hill, and watching it roll back down, echoing Sisyphus’s doomed struggle, and by extension Camus’s suggestion that maybe he was happy after all.

Elsewhere in the hall, Bas Jan Ader‘s videos (one of which, Fall 2 filmed in Amsterdam in 1970, serves as the source of the exhibition’s evocative promotional image), strike at a human element, which serves as one of the strongest communal themes throughout the show. While other works look at failure in a more general sense, Ader’s works embody the failures of the artist personally. Fall 1, where the artist hangs from a branch over a river, eventually falling in, sits next to Fall 2, where the artists drives his bike into the river in Amsterdam. Both works use the artist himself as the source and site of failure, captured beautifully in black and white 16 mm projections, and yet somehow they pale in comparison to the real life tragedy of his death. His attempt to break the world record for a single-handed crossing of the Atlantic Ocean in July 1975, which ultimately cost him his life. His intended work as part of the project, left unfinished due to his death, In Search of the Miraculous serves as perhaps the most harrowing illustration of some of the wider issues that the show addresses.

Ader’s works also connect seamlessly to Tacita Dean’s work, Disappearance at Sea 1, which also addresses loss at sea and failed ambition. Dean’s lighthouse poignantly recalls the story of Donald Crowhurst, an English businessman (and amateur yachtsman) who died while trying to sail around the world in 1968. Dean’s lighthouse projection is haunting not just for its symbolism, but also for the shades of irony that it may well have been something that could have saved him on his doomed voyage. The work is a haunting elegy to Crowhurst’s ambition and, ultimately, his fall.

No less powerful is Gillian Wearing’s video piece, Prelude, part of a trilogy of films addressing drinking and alcoholism. In Prelude, black and white footage of a street drinker named Lindsey plays in slow motion under a voice over from Lindsey’s twin sister, as she talks about Lindsey’s tragic death from liver failure, her funeral, and their mother’s cold and seemingly emotionless reaction. The palpable guilt of Lindsey’s surviving twin gives the whole piece and even more ominous, funereal tone. The footage itself is also beautifully brooding.

What comes across in this work as in several others is the way many of the works embrace openly themes of sentimentality and loss, as well as human fragility. In some works, like those of Ader or Dean, the mood is sombre. Elsewhere however, elements of the absurd or comical also come into play. Abramovic‘s typically pointed work, Art Must Be Beautiful, Artist Must Be Beautiful, is a 14 minute black and white video of her combing and brushing her hair, becoming increasingly vicious in her actions all the while repeating the title phrase. Her self-inflicted assault finally ends with her saying, “I have destroyed my hair and face.” In the same room sits John Baldessari’s Teaching a Plant the Alphabet. In this work, the artist holds up each letter of the alphabet in front of a small pot plant, saying each letter out loud several times before moving on to the next. Clearly a doomed project, Baldessari’s work echoes the Beckett inspired elements of absurdity and futility while also posing questions about the nature of language and its interconnected structure of signs.

While no doubt providing the gallery with a heavy drawcard (everyone I have spoken with about the show seems to audibly gasp when I list even a handful of the names exhibited together), what makes this show satisfying is the coherent way in which everything sits together. The skill of the artists involved, and the attention that has been paid to the curation, have the combined effect of not only resonating strongly, but also moving far past the sense of expectation and weight - something which could otherwise distract from such an impressive collection of contemporary artists and their practices.