Amber from the Psyche 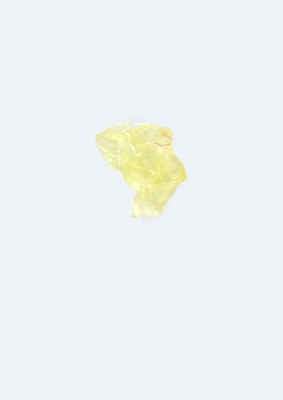 Mitchell's photographs give these encrustations an amberlike quality with some strange wool-like threads. They look like crumpled cellophane or crunched up barley-sugar. Because of the eye's proximity to the brain there is the suggestion of it being a residue from the subconscious, a logical link if you consider the Rapid Eye Movement that accompanies dreaming.

This is Dane Mitchell‘s first show at Hopkinson Mossman and it has all his usual characteristics of conceptual tightness, an interest in ‘the invisible’ - and refined, restrained, elegance. This time the bodily secretion called rheum is under the Mitchell microscope, a substance that links up his longstanding interest in dust and in sleep, a state where the body seems inactive while the mind is taken over by other forces.

As with most other artists at Hopkinson Mossman, there are two displays in two galleries: one an installation of four sculptures, the other a row of seven photographs. The two, of course, tightly ideationally connected.

With the sculptures, two are made of polished brass, matching the yellowish colouration of the rheum photographs next door. One of these, Hypnosis Venn, is a set of interlocking hoops, two large rings leaning on the wall so they look like a Venn diagram of overlapping circles. One has ‘sleep’ engraved on its inner rim, the other ‘waking’. The in-between stage (the space within the vesica piscus) is obviously of great interest to Mitchell, that period between light sleep and day dreaming (or reverie) where the conscious mind is barely ticking over. It is also paralleled by states of mind such as hypnosis.

Hypnosis is directly linked to the other brass sculpture, Teleplastic Alloy (Witnessing Separates itself From Seeing), a set of four right-angled corner flaps positioned on the floor in formation so that a 2200 mm x 2200 mm negative square is contained within. On the show’s opening night, an anonymous person, who was earlier hypnotised, would have seen an object on the enclosed space perceived as empty by everybody else. Consistent with Mitchell‘s interest in unseen presences - like his staircase spaces containing spells - it also could be a comment on the modernist white cube and subtractive, ‘emptying out’ projects by artists like Billy Apple in the mid-seventies.

The other sculptures are clamp works. One, Clairalience (the Scent of an Object Not Revealed to the Eye), is a set of wooden G-clamps on a shelf that hold up two horizontal brass bars that clench between them a sample of perfume on a paper strip. We aren’t told anything about the scent’s construction, whether it was made by Michel Roudnitska, Mitchell’s usual collaborator, for example. To me it doesn’t smell prosaic (as in a domestic architectural ambience), or say meteorological (outdoors), merely a quite pleasant male perfume, non floral and woody.

The last sculpture, Spirant Object (Hypnotic Breathing) links to the other room. Four vices hold up a small speaker on a thick glass sheet. It’s playing the sound of somebody breathing. Relaxed and regular as they breathe in and out, they are not sleeping (there is no snoring), but there is a slight wheezing, a faint hint of intermittent gasping or gurgling. In the large room the sound is surprising intimate and unnerving. You can even hear it when approaching the gallery coming up the stairs.

The coloured photographs of rheum are in the small room. Rheum is that dried secretion that appears in the corners of your eyes after deep sleep and perhaps a dusty day’s work; usually found in the eyes of children it’s not so common as you get older. It is a sort of grit expelled by not only our eyes but also the corners of our mouths and noses (a runny uncongealed version). Mitchell‘s photographs give these encrustations an amberlike quality with some strange wool-like threads. They look like crumpled cellophane or crunched up barley-sugar. Because of the eye’s proximity to the brain there is the suggestion of it being a residue from the subconscious, a logical link if you consider the Rapid Eye Movement that accompanies dreaming.

In a sense these photos could be regarded as Amber from the Soul, some sort of golden solidified ectoplasm exuded by the repressed psyche. Very clever and intriguing work.