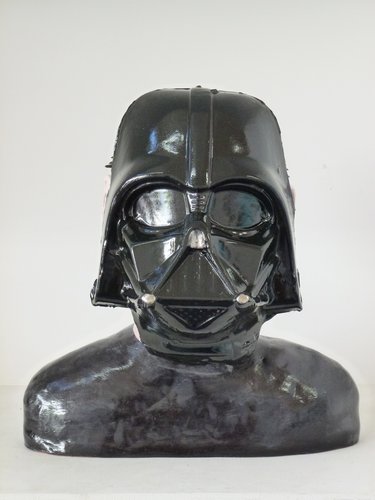 Paul Rayner is a “multi-media” artist as a time when branding requires specialisation. You can't be seen to dabble in too many mediums and retain much cred. Making prints is probably as far as high-profile artists are allowed to stray - witness Hammond, Pule, Millar et al - but ceramics is likely to be a step too far.

Public galleries such as Lower Hutt’s The Dowse and Waikanae’s Mahara are known for their commitment to ceramics - the former’s recent Barry Brickell show and the latter’s two historical surveys of the work of Mirek Smisek and the Wrights of Reikorangi being pertinent examples which indicate a slow but sure shift in the status of the medium from “mere” craft to identifiable art. It’s a similar redemption - and for similar reasons - Maori taonga experienced when released from the tomb of ethnology by the Te Maori show in the 1980s. After Modernism, the largely 18th century-constructed hierarchy of cultural production couldn’t be sustained, just as the separate genres of portraiture, landscape, still-life and genre went out the window - at least conceptually. They remain, though, fixed in the hearts and minds of many, as does the hierarchy of cultural production. There are few “major” private collections which feature photography, for instance. Still.

About the time Modernism began segueing into what we call Postmodernism the public galleries began losing leadership in taste to the auction house system, and in the ensuing couple of decades this has become a more marked feature of what gets seen and promoted. Despite the - let’s face it - now marginal efforts of places such as The Dowse and Mahara, ceramics still feature at auction quite separately from paintings, sculpture, prints, drawings and even photography. (But of course, the auction houses are quick to quote public gallery shows to stiffen the provenance of their wares.) There’s still a long way to go in the acceptance of ceramics.
Generally too, collectors of ceramics are more likely to go for historical pieces (and this being New Zealand, “historical” amounts to anything more than just a decade old): Olive Jones, Oswold Stephens, Doreen Blumhardt, Len Castle, Helen Mason and so on. We know who they are. Only rare birds such as Wellington’s Simon Manchester have the passion, knowledge and confidence to collect really contemporary stuff as well, and such collectors are hardly household names. Besides, they tend to buy the work directly from the artists or from outlets such as Masterworks or Objectspace, never from the Gow Langsfords of the system.

Just as current Maori weaving in the hands of artists such as Fiona Jones, Nigel How and Te ao Marama Ngarimu (not household names either, huh?) could be at the forefront of contemporary art, current ceramics by the likes of Martin Poppelwell and Paul Maseyk are in the same situation, all of them victims of reigning perception. Photography was in exactly the same position forty years ago. Then, anyone with eyes in their head could’ve picked up a now-famous Peryer from Snaps gallery for $35. Or a classic Aberhart for $15. The images haven’t changed - the climate has. The business of collecting often illustrates not so much perspecacity as a finely-tuned herd instinct.

Paul Rayner is a “multi-media” artist as a time when branding requires specialisation. You can’t be seen to dabble in too many mediums and retain much cred. Making prints is probably as far as high-profile artists are allowed to stray - witness Hammond, Pule, Millar et al - but ceramics is likely to be a step too far. The hurly burly of the saleroom and the effect on reputations is all part of culture’s richness (even though its use of the word important has turned it into a slut with no morals) but culture takes a longer view and retains slightly steadier values. Who knows which of the current stars will join ‘80s icons such as Christina Conrad, Charo Oquet and, possibly, Gavin Chilcott in the cultural graveyard two decades hence? It’s not about current high prices, who’s going to Venice, who’s winning the Walters’ Prize (or even those the leading critics are fore-grounding), it’s about who’s got their finger on the culture’s pulse, not the art world’s.

Another shift in status happening after Modernism - and something prefigured in the Pop movement - is the influence of popular culture, a rowdy brat disturbing the rather patrician calm of high art. Given the ongoing connection between high art and social status there’s often the strong feeling that collective breaths are being held until the virus of popular culture is dealt to. Well, dream on. Frank Sinatra’s gonna win out over William Walton anytime soon.

Rayner’s rather reckless focus is on popular culture, not as some academic assessor but as one merrily immersed in it, and his take is affectionate rather than ironic. When he pokes the borax - which is often - it comes from pure fun not from any coolly detached condescension. Pop is clearly an inspiration but his real godfather is the 18th century’s Thomas Rowlandson. Under the bright glazes and corny subject matter, Rayner is a mercilessly sharp-eyed social critic.

The show’s title - Jerusalem - derives from a series of nine jugs in the form of James K Baxter’s bust. Flirting with caricature and unnaturalistic colouring, they nonetheless uncannily summon up the poet’s presence. It’s the weary, disillusioned Baxter who, given the way things have turned out since 1972, probably died not a moment too soon. Rayner’s crack at realism is really about mythology, and myth-making is the substantial end of the celebrity spectrum. Whether it’s Baxter or Kim Kardashian the key word here for us common people is identification: in some way these figures are living our dreams whether it be Hemi’s social activism or Kim’s glamour and spending power. Rayner’s work operates in the murky border between such figures as models to be emulated or embodying lifestyles to be dreamed about. As projection, this fits perfectly into the Jerusalem tradition where a place has become the image of a desired destination, a heaven.

The advent of Elvis in the mid-1950s was probably a key moment in the emergence of popular culture as a reconfiguring cultural force and there’s something about the non-material fluidity of music making it so often in the vanguard of change. Rayner’s a music buff and his invented pop group, The Ray Tones - somewhere between the Beatles and Split Enz (with a nod to the Howard Morrison Quartet) - takes an identification with celebrity to a point where all four members are fashioned as self-portraits of the artist. As Toby Jugs, the means to slake his thirst. The Ray Tones have a history too. The current members - Paul, Alan, Earl and Larry - are the latest formulation. The show also features earlier members - Rana and Neal - also as Toby Jugs. If the Kardashians can have a family, well, why not Rayner?

Speaking of which, Me and my family is a striking feature of the show. Working from a group photo c.1960 Rayner has fashioned a head-and-shoulders ceramic re-creation of parents, three children and the family dog. Take that Kim & co. It’s all there: the cheesy smiles, the formal stance, the best clothes - only the dog has escaped learning how to behave in front of a camera.

The most impressive works are three, almost life-sized, self-portraits in a Darth Vader mask. Rayner often kids us with his seemingly clunky technique and raffish glazing - it’s all part of his act - but the Vader pieces reveal just what a master of observation he can be. OK, it’s all done with mirrors as we know, but from the back the figures are immediately recognisable as the artist. But then, realism’s not really his bag. Rayner’s manual shaping takes realism as a starting point, and, like Rowlandson before him, develops it into a larger project where the individuality of the subject is subsumed into the story, and with the Star Wars reference it’s a very old story, the struggle between good and evil. As they say these days, Rayner “problematises” the issue in his acceptance of Vader as a kind of popular hero, the action man decanted of any moral significance. But, as long as he’s losing we’re winning. Placed in the gallery window, though, the backs of the artist’s head “face” the space: the black masks look outwards and roam the world with their dark blank gaze.