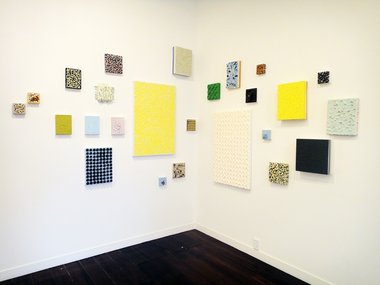 These lush and colourful Fletcher paintings of almost ten years ago initially look exuberant, but it soon dawns that they are more related to certain brightly hued fish or South American amphibians - they seem to be rife with something toxic. The saturated colours and warty, pimple (polyp or pustule-like) surfaces seduce while remaining creepy. You feel you might catch some exotic form of chicken pox if you get too close.

In this cleverly planned exhibition the recent tape drawings on paper by Ruth Thomas-Edmond are presented as flat foils to the projecting, highly sculptural acrylic paintings of Graham Fletcher from 2005.

Fletcher‘s earlier paintings have a very different feel from the works he has been making in recent years, of tribal sculptures positioned with the decor of modernist domestic architecture: collected (let’s say ‘stolen’) statues brooding in sitting rooms.

The lush and colourful paintings of almost ten years ago initially look exuberant, but it soon dawns that they are more related to certain brightly hued fish or South American amphibians - they seem to be rife with something toxic. The saturated colours and warty, pimple (polyp or pustule-like) surfaces seduce while remaining creepy. You feel you might catch some exotic form of chicken pox if you get too close. While catching some ghastly tropical malaise is possible, you still want to touch.

At the same time they also look like icing coated cakes or layered sugary confections - despite the contagious diseased and spotty connotations. Strangely alluring to those with a sweet tooth, while also hard art to relax with, they are related to early Rob McLeod and Rohan Wealleans in their rubbery skin patina.

Some look like clusters of droopy matches or dotty camouflage fabrics, while their ubiquitous ‘stalactite’ encrustations appear to have been made with some kind of dripping or dunking machine, along the lines initiated by Roxy Paine, an artist interested in devising machinery that features new ways of mechanical paint application. The wonderful thing is that these works seem so individualistic. They’re not bland conveyor-belt, productionline art at all.

Ruth Thomas-Edmond‘s works on paper are related to those of Eve Armstrong (use of tape) and Ava Seymour (ultra-sensitive edge and strong interest in shape). Thomas-Edmond is not casual in her method; nor is it process oriented, but focussed on a resolved art object - a form of drawing that is interested in the rhythms of the grid and subtly overlapping layers that catch reflected light.

These isolated shiny plastic shapes (with their jagged edges like Clyfford Still paintings or county maps) have their own internal dynamic, accentuated by sheen and the viewer’s position to the light source, not by tonal contrasts of edge. It is as if the shape were somehow embossed with a variety of regularly occurring horizontal and diagonal forms, angular forms sliding over but still staying in formation. At Melanie Roger these works are either three coloured forms interacting, or one. The singular variety really accentuates the internal dynamics of the spiky layers so they become like an almost imperceptible rippling shield with shredded contours.

It’s a nicely balanced form of image with both the outer shape perimeter and inner broader surface being used in such a highly expressive manner. Like with Fletcher’s paintings, you have stand close to appreciate what they have to offer.