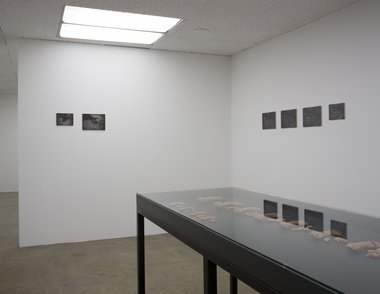 While Satorre's drawings are quite tonally dense and don't have the lightness of touch and ‘air' of the two cartoonists, they make sense alongside his choice of tin, clay and mineral as physically heavy art materials, and both themes of the cartoons. His eight drawings are split between two rooms and seem to focus on two countries.

Focussing on a cluster of issues based on how a visiting outsider might grapple with a freshly encountered, national community’s culture, Mexican artist Jorge Satorre is currently presenting two simultaneous exhibitions in Enjoy (Wellington) and Artspace (Auckland). The latter show’s title comes from linguist Kenneth Pike, with Emic referring in anthropology to a local (or native) point of view, and Etic to the view of a researcher trying to interpret the local. So this exhibition accentuates the breaching of a threshold, passing through the border where contrasting historic/geographic contexts and social identities push and rub up against each other.

Within this show there are four ways that barrier is crossed; four ‘chapters,’ as Riva and Arozqueta call them in their introduction. This happens via a set of geological replicas, a pair of Mexican and New Zealand cartoonists with enlarged works on the gallery walls, a series of diminishing ceramic bones based on those of a giant eagle that died out just after the arrival of the Polynesians, and a suite of small acrylic drawings by Satorre himself.

Satorre’s theme of inside versus out, or local versus foreign, has parallels with some of the ideas expressed in Roland Barthes‘ very famous 1967 essay about Death of the Author and Birth of the Reader, except now a modified version could finish with ‘the Birth of the Etic must be at the cost of the Death of the Emic’. In other words who controls the ‘facts’, histories, cultural byproducts, values and ‘meanings’ of an identifiable community? How are the ‘normal’ and accepted versions challenged (if not usurped) by newcomers? And are they ‘translated’ in some way, passing through a cultural/linguistic filter established by the visitor’s point of origin?

With the geological ‘samples’ in the large square gallery, Satorre and Artspace have arranged for local sculptor Joe Sheehan to carve - in two types of local greenstone - duplicates (but reduced in scale) of two pieces of jagged Guatemalan jade, thus creating ‘regional’ variations. They also organised the two cartoonists to put enlarged versions of their Mexican and New Zealand drawings on the walls, complete with sensitive ink brush lines and washes. The Mexican work by El Fisgón satirises class pretensions with Orwellian images of dogs and farmbirds singing opera from a stage, while the New Zealand work by Guy Body commiserates with the ubiquitous New Zealand desire to own a quarter acre section, this one gradually disappearing in a landslip.

In two of the three side-rooms Satorre presents his own acrylic air and toothbrush drawings, cast avian sculptures, and mock eagle bones. As you might notice in the above photographs of the bigger space, there is too much room there for too small a quantity of work. Two vitrines compress tin and ceramic sculpture that should be presented spread out (in a secure and linear fashion) on the walls. It looks as if the curators haven’t done their scheduling properly. One room is empty.

In the corner gallery Satorre‘s ceramic Haast eagle bones, like the carved ‘Guatemalan’ greenstone, are reduced - perhaps this time as a comment on the shrinkage brought about by firing - resulting in a sequence of thirteen diminishing groups of four (femur, rib, two talons). Time with its attendant statistics (like a geographic land mass) apparently diminishes in impact as the intervening period (or distance) increases. This applies likewise to the ornithological set of extinct New Zealand creatures, fifty of them, showing subtle colourations in the metal and ranging from tiny robins to the giant moa. Made in the manner of toy soldiers they, like military casualties, are small details subservient to the ongoing, much larger, process.

While Satorre‘s drawings are quite tonally dense and don’t have the lightness of touch and ‘air’ of the two cartoonists, they make sense alongside his choice of tin, clay and mineral as physically heavy art materials, and both themes of the cartoons. His drawings are split between two rooms. One set, an almost identical pair, seems to show men on a courtyard searching/waiting for daily labouring work. They could also be prisoners. In the foreground one man is blowing a mouthful of fire into the face of another, a comment I assume on employer/worker (or prisoner) relations. Or life in Mexico.

In the other room six drawings are divided between four very similar images of wild pig (introduced ‘Captain Cookers‘) rooting for food on a grassy bank, one of a dog (or is it a kunekune?) standing in a lane, and another of two adult pigs and three piglets crossing a street. The significance of the rooting Captain Cookers is in this context pretty obvious, chomping through the natural resources while the set of drawings, with the duplications, seems a comment on the circulation of Etic ideas as portable images.

Although as I’ve said this show is irritatingly sparse, the wall cartoons are a real treat: looking sensational blown up. Satorre’s own ‘smudgy’ drawings, despite their repetition, sneak up on you, and the miniature tin birds (once you forget about their awkwardness in the bare room) sustain prolonged scrutiny. Overall though, because of the ceramics, greenstone and ambience, it’s pretty dry.